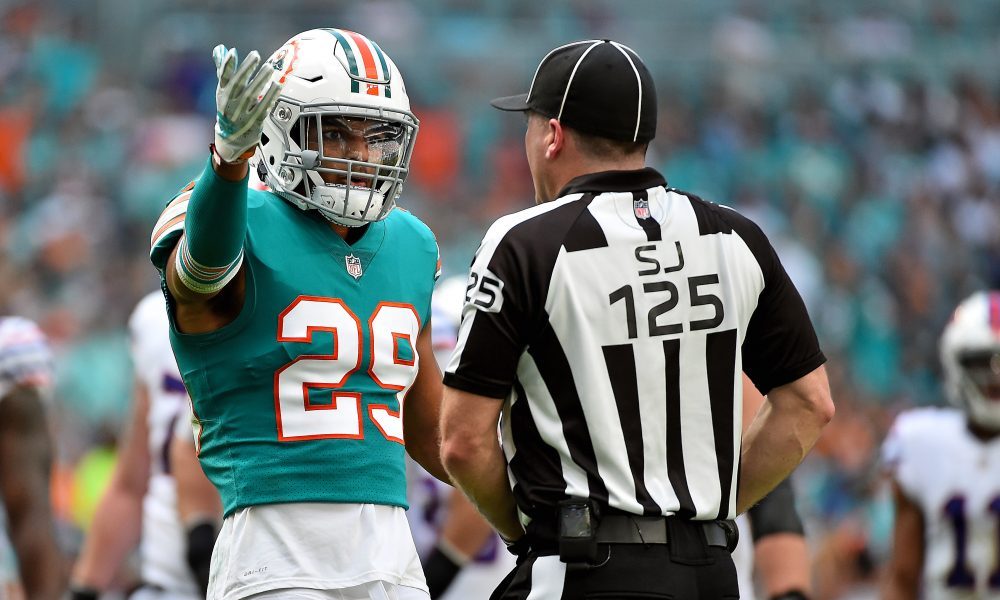 Late Thursday night it was reported by ESPN’s Chris Mortensen that Dolphins defensive back Minkah Fitzpatrick has requested a trade just one game into the season. After being the 11th pick in the 2018 NFL Draft, Fitzpatrick has found little joy in playing down in Miami.

Adam Gase who drafted Fitzpatrick was fired following his rookie season and the front office brought in former New England Patriots defensive coordinator Brian Flores in hopes to get the full potential out of the team’s young players. But quite the opposite has happened. Since the arrival of Flores, Fitzpatrick has been lining up all over the field playing nearly every single position in the secondary and he has really struggled.

Back in the preseason, Fitzpatrick’s mother criticized the team for playing her son at strong safety when he is not best suited to be there. Instead of brushing these comments off Fitzpatrick actually agreed with her stating, “She feels very strongly. She’ not wrong. Coach has asked me to do something right now. I got to do what they ask me to do. If we have to have some discussions in the future, we’ll have those discussions.”

Well, it seems like those discussions have come much quicker than originally expected.

What also doesn’t help the situation is the Dolphin’s promotion of a losing culture. The team has made it obvious that they are tanking for a number one pick after trading away a lot of their talent. This season and this team seem like a lost cause and Fitzpatrick is now seeking for a better situation. But where would that situation be? Below are some teams which would be ideal fits for the former Alabama defensive back.

This would already be a much better situation for Fitzpatrick. With a history of a winning culture, stability at head coach and the team’s biggest distraction gone the Steelers would be a nice fit for him. Not to mention that the Pittsburgh secondary could really use him. Since the retirement of Ryan Clark and Troy Polamalu, it seems as if the Steelers have had a bit of a revolving door at both safety positions. The team just drafted Terrell Edmunds at strong safety which would give Fitzpatrick the chance to move back the free safety where he is more comfortable. And judging by the Steelers defensive performance against the New England Patriots during week one, it might not be a bad move to pick up a talented second-year player.

Arguably the best player on the Los Angeles Chargers defense is Derwin James who will miss most of the season due to injury. The window for Phillip Rivers is also closing quickly which leads me to believe that the Chargers would want to try and swing for the fences while they still have talent. Until James returns Fitzpatrick would be able to fit in nicely with the secondary and when he does in fact return, could turn into one of the deadliest combinations in the back of the defense. It’d also be interesting to see the top two safeties from the same draft team up so early in their careers.

Broncos head coach Vic Fangio is one of the best defensive coaches in the league. He is responsible for the dominance of the San Francisco 49ers and Chicago Bears smothering defenses throughout the last decade. Now that he is the head coach of a team I’m sure he would still like to build his team up on that side of the football. I’m also sure that Fitzpatrick would enjoy working with someone who is proven to get the most out of his young players. Just look at former Alabama safety Eddie Jackson, who was an afterthought when first drafted but is now one of the premier safeties in the league.

Even though he was drafted just a year ago, it isn’t unlikely that the Dolphins deal Fitzpatrick to one of these team’s shortly. The team is outwardly in tank mode and the human swiss army knife is one of the players who they can potentially get a ton of value for.