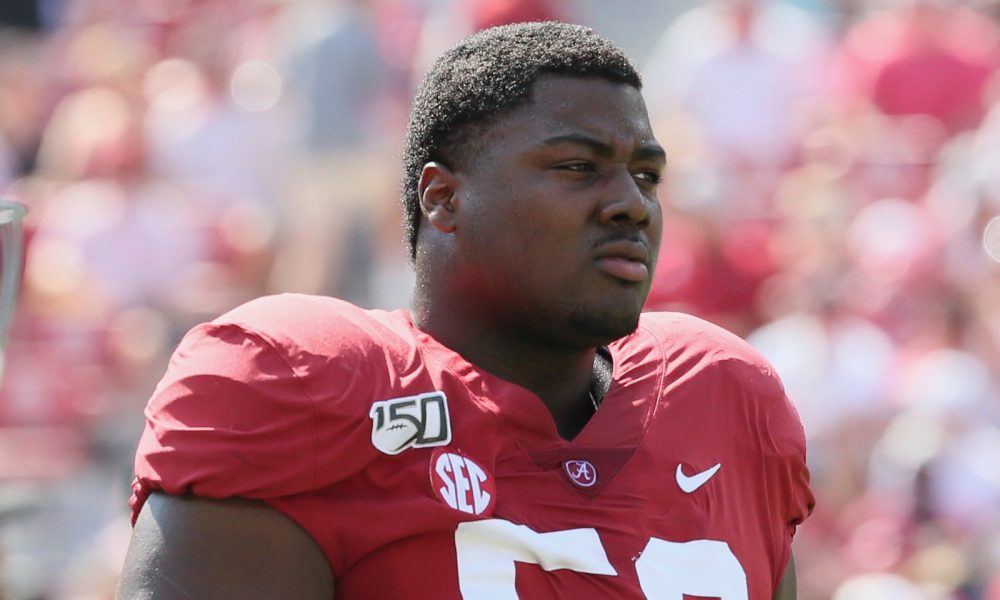 The final result of 49-7 at Bryant-Denny Stadium in week four featured five touchdown passes from Tua Tagovailoa, a career performance from Henry Ruggs III (148 yards, two scores) and Najee Harris’ first 100-yard game at running back this season; however, the most entertaining moment happened with a few minutes left in regulation.

If he could be any recording music artist at the time, Rick Ross would have been the perfect character for him.

While he was on the sideline, one can probably think the song “Hold Me Back” was playing in his mind.

Christian Barmore still had some anger symptoms, following a targeting call against him in the Crimson Tide’s previous matchup with South Carolina.

He was suspended the first half of the game and was antsy to get in.

At one point in the second half, just about every defensive player was huddled around Barmore.

Upon Nick Saban calling his name, the sideline erupted and the Philadelphia (Pa.) native attacked the first person he saw with bad intentions.

His tackle for loss had teammates hyped, coaches with jaws on the floor, and fans wondering ‘can we see him play more?’

The redshirt freshman brought the first sign of nastiness, aggression and just angry style of football from a defensive line that’s been seen thus far. He recorded three eye-popping tackles and despite leaving fans wanting more, Barmore didn’t see much action at all versus Ole Miss.

Robinson, who played from 2013-15, was imposing, mean and freakishly athletic for someone at 320 pounds on a 6-foot-4 frame.

Alabama is down LaBryan Ray (foot) and waiting on Raekwon Davis and Terrell Lewis to consistently put together strong games.

In facing an athletic quarterback like Kellen Mond, a quality offensive mind in Jimbo Fisher and the atmosphere that is Kyle Field for the Texas A&M Aggies, this is a game where Barmore could really feast on the defensive front.

Turnovers in critical moments have been a staple of the Alabama-Texas A&M game, since the Aggies joined the Southeastern Conference in 2012. Even with his ability to extend plays and make accurate throws, Mond has not fared well in situations where he is constantly pressured.

Barmore, who is tied for third on the team in quarterback hurries (two), can collapse the pocket from inside and has the motor at defensive end to frustrate. The Tide worked on communication and containing the quarterback during its bye week, and will continue the task this week.

Fans want to see Barmore on the field. Hopefully, he sees time on Saturday.