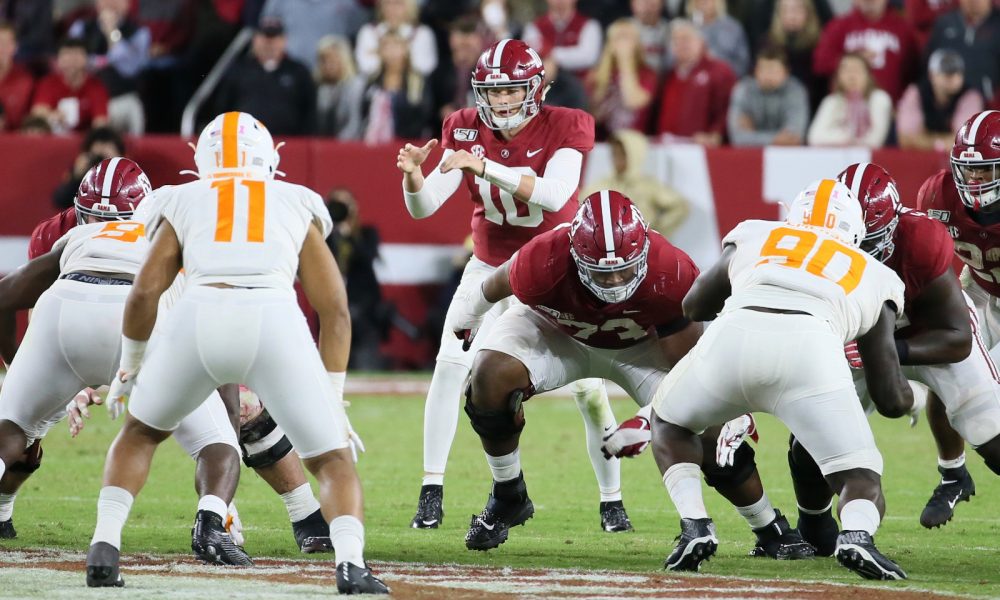 Alabama’s offensive line is getting better each week, and one of its finest performance came versus Tennessee at Bryant-Denny Stadium.

While fans have enjoyed the leadership and toughness Landon Dickerson brings at center, Alex Leatherwood dominated at left tackle under the lights against the Volunteers.

The 6-foot-6, 310-pounder was a five-star from Florida upon arriving in the 2017 class and he was awarded Offensive Lineman of the Week on Monday via the Southeastern Conference for his performance.

Leatherwood set the pace in the Crimson Tide’s rushing attack, clearing the way for 140 yards and three touchdowns on 6.4 yards per carry. He assisted Najee Harris to his third 100-yard outing of the season and the second versus an SEC opponent.

Behind Leatherwood, the junior recorded 105 yards with two scores on 21 carries. Harris got stronger as the game went on and will look to continue his efforts this week in a matchup with Arkansas for homecoming.

Through 62 snaps, Leatherwood did not allow a sack, pressure or quarterback hurry – despite missing just one assignment. According to Nick Saban, it was the best he has seen all year from Leatherwood.

“He played really well,” Saban said of Leatherwood. “Alex has played well for us all year long, but I thought he played really, really well in this game. He was physical. He played with a lot of toughness and had no mental errors.”

Along with getting an SEC honor, Leatherwood was also one of six players of the week elected from Alabama’s coaching staff.

With it resting Tua Tagovailoa (ankle) this week, Leatherwood and company will help prepare Mac Jones and Taulia Tagovailoa for the Razorbacks in practice.