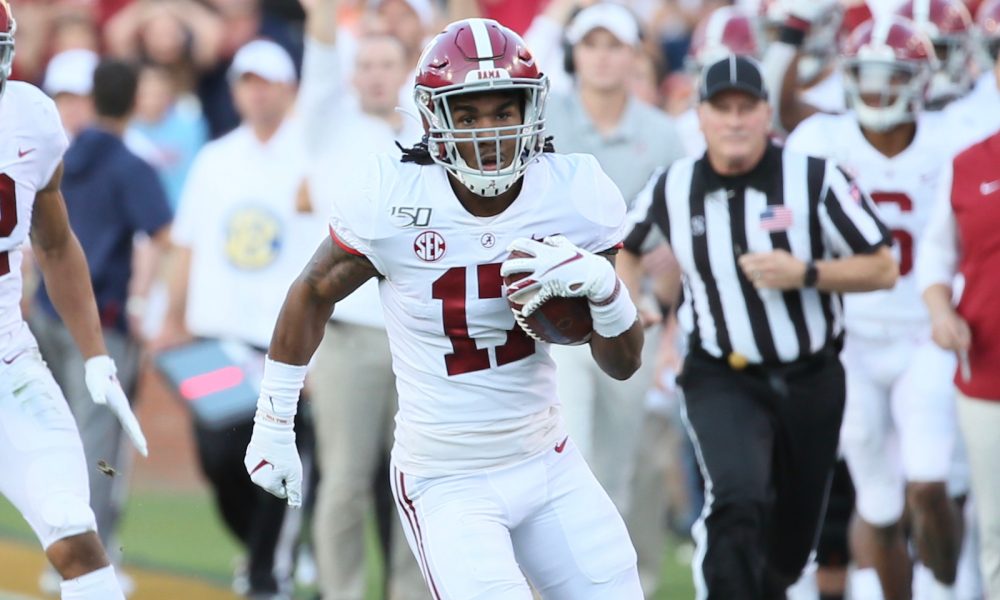 It probably does not mean much with Alabama not going to the College Football Playoff, but at least one national outlet has recognized the program with honors.

After seeing student-athletes from the Crimson Tide get snubbed for awards, Pro Football Focus set the record straight. For the site that excels in dissecting the analytics of both college and professional football, PFF released its Team of the Year for the Southeastern Conference on Monday.

The group of Najee Harris, Jerry Jeudy, DeVonta Smith, Landon Dickerson, Jedrick Wills and Jaylen Waddle all were named to its first-team offense.

Harris, a junior, achieved his first-ever 1,000-yard season. A native of California, the former five-star totaled 1,088 yards rushing with 11 touchdowns on 185 carries.

The 6-foot-2, 230-pounder also notched 27 receptions– including seven for touchdowns.

The combination of Jeudy and Smith was special for Tua Tagovailoa and Mac Jones at quarterback. Despite suffering drops late in the year, Jeudy still managed to lead the team in receptions (71) and total 959 yards with nine scores. Smith, on the other hand, produced a breakout campaign, as he led the group in yards (1,200) and touchdowns (13) on 65 catches.

He committed some penalties that he would love to have back; however, Landon Dickerson was strong on the offensive line. The 6-foot-6, 307-pounder did not allow a sack and gave up four quarterback pressures from his center position in 389 snaps.

He graded out at 76.8 and 84.8, respectively in both run-blocking and pass-blocking.

Dickerson, a former five-star, was able to smoothly transition from Florida State to the SEC with Nick Saban and the Crimson Tide.

Wills, a junior, received big love from PFF in his second-year at right tackle.

He was one of two offensive tackles in the SEC to earn a grade of 90 in the regular season, despite surrendering 11 quarterback hurries. While that number was high, he gave up one sack and tallied a grade of 91.4 in run-blocking. In this department, he was fourth among all tackles Football Bowl Subdivision (DI).

Waddle, a sophomore, was the best punt returner this year.

He was the lone player to surpass 400 yards (474) in this category and earned the highest grade in all of Division I for PFF (92.0) for his exploits. A native of Houston, Texas, Waddle averaged 25.3 yards per return and registered a 77-yard touchdown versus LSU on Nov 9.

He also made the second team list for kick return.

Regardless of its defense not being as stellar as it once was under Saban, the trio of Anfernee Jennings, Xavier McKinney and Trevon Diggs grabbed first-team honors from PFF.

After having a serious injury in the 2017 CFP semifinal, Jennings served as Alabama’s most productive player on defense this year. He totaled 73 tackles – including a team-high 12 tackles for loss and 7.5 sacks. The redshirt senior had eight quarterback pressures, five pass breakups and one interception as well.

According to PFF, Jennings posted an 88.8 pass-rush grade and an 86.9 in run stopping – both were career-highs and ranked among the top SEC edge rushers.

McKinney, a junior, did everything for the Tide on defense.

He led the team in total tackles (85) and had 4.5 stops for loss, two sacks, five breakups, four quarterback pressures, four forced fumbles, three interceptions, one blocked kick and one touchdown (pick-six). The native Georgian communicated play calls across the formation, positioned teammates in the right spots, and even made a ton of marquee plays for the team.

He encountered struggles versus LSU and Auburn, but managed to record a team-high eight breakups, three interceptions and two scores.

Patrick Surtain II was a second-teamer at cornerback, while Raekwon Davis got selected to the third-team for interior defensive linemen.

Christian Barmore was an honorable mention for defensive linemen.

Stephen A. Smith has Nick Saban’s back after loss to Auburn
Is the run of national championships over for Alabama? Paul Finebaum says “Yes”
To Top
%d bloggers like this: