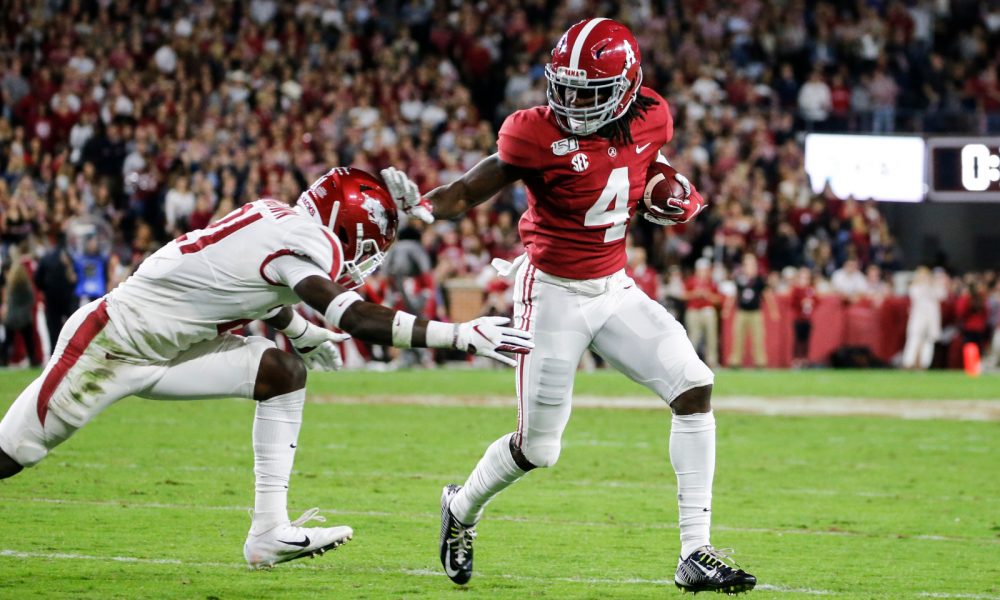 This year’s NFL Draft is deep at the wide receiver position and as always, there is one prospect leading the pack. Although the likes of Ceedee Lamb, Tee Higgins and Justin Jefferson are attracting attention, Jerry Jeudy of Alabama is regarded as the top receiver in the class.

Once a five-star from Deerfield Beach, Fla., Jeudy arrived to the Crimson Tide in its top-ranked signing class for 2017.

He quickly drew comparisons to Calvin Ridley and Amari Cooper and did not disappoint Alabama fans. He collected two 1,000-yard seasons in career – including a performance of 1,163 yards receiving with 10 touchdowns on a team-high 77 catches in 2019.

Jeudy won the Fred Biletnikoff Award (college football’s top receiver) as a sophomore in 2018, following a season with 1,315 yards and 14 scores.

The 6-foot-1, 192-pounder is an exceptional route runner with speed and strong hands.

According to Peter Schrager of Good Morning Football, he referred to Jeudy as the “most complete” receiver in the draft.

“This is the deepest WR Draft class since the legendary ’96 one. My top WR prospect heading into the Combine is @AlabamaFTBL WR @jerryjeudy. He’s as polished a route runner in this class as there is, and after the slant pass, has more than just a bit of OBJ in him.” —@PSchrags pic.twitter.com/zRrmcGWpsa

In terms of comparisons, Schrager had Jeudy in the same class with Antonio Brown, Julian Edelman and Odell Beckham.

When it comes to dominating the NFL at the position, not too many did it like Cris Carter.

A product of Ohio State University, Carter was selected to eight Pro Bowls and was twice named first-team NFL All-Pro. He led the league in receptions in 1994 (122) and carried the NFL’s high mark for touchdowns in 1995, 1997 and 1999.

Carter was named to the NFL’s All-Decade Team for the 1990s and was inducted into the Pro Football Hall of Fame.

On Wednesday, he tweeted out a photo of him and Jeudy together.

My guy @jerryjeudy will put on a show at the @NFLCombine and I’ll be there to witness it . https://t.co/u4pVbSgaAE pic.twitter.com/ubYPsrnem9

Carter said Jeudy will “put on a show” at the NFL Combine and he’ll be there to witness it.

In his final game at Alabama, Jeudy totaled 204 yards receiving with one touchdown in a 35-16 victory for the Tide over Michigan in the Citrus Bowl. His career ended five scores shy of tying Cooper (31) for the all-time lead in school history.

NFL Draft analysts have him between the top-10 and top-15 for the upcoming event.