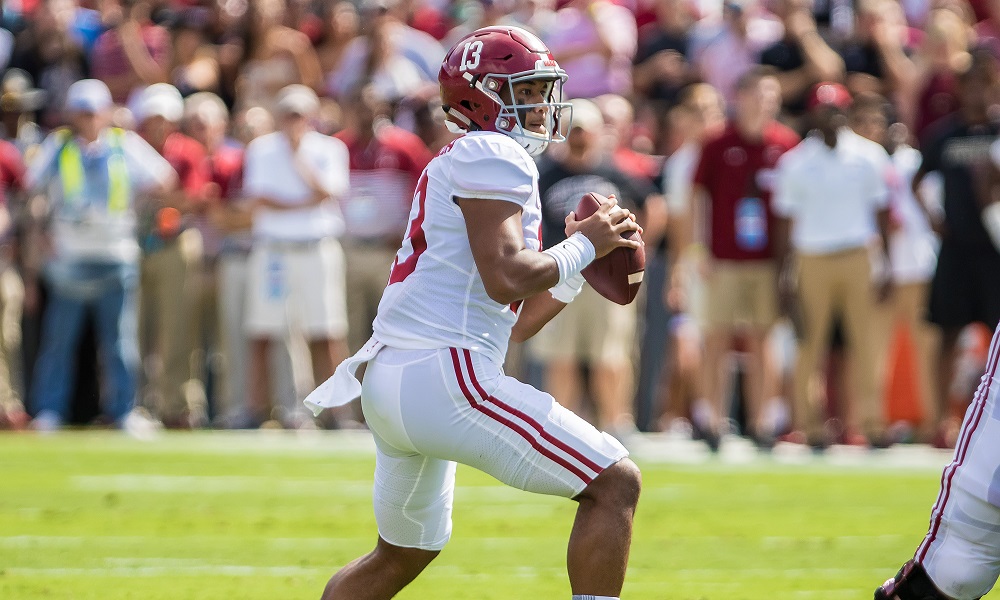 The 2020 NFL Draft class at quarterback, wide receiver and tight end all arrived at Lucas Oil Stadium (Indianapolis, Ind.) on Sunday to register for the annual NFL Scouting Combine.

After taking part in orientation and interviews, the prospects had their measurements recorded on Monday and four former Alabama players dominated the weigh-in process.

Tua Tagovailoa, a two-year starter at quarterback, was listed at 6-foot-1 and 215 pounds at Alabama.

He measured out at 6-feet, 217 pounds at the combine. Not only was this great for him, but he also entered the event with his right hip in strong condition. Three months have passed since his injury versus Mississippi State; however, Tagovailoa’s determination and the work performed by the medical staff of the Crimson Tide has him projected as a top-five pick.

In terms of his hands, arms and wingspan, Tagovailoa carries similar measurements to Russell Wilson and Drew Brees. His right hand came out to 9 7/8” and his left hand (dominant hand) measured out at 10” even. His arms were 30 4/8” and his wingspan was 75 2/8” at the combine.

Henry Ruggs did not come out to 6-feet, in terms of height, but his hands won the combine measurements for him.

A native of Montgomery, Ala., Ruggs posted a size of 10 1/8” hands and this will help show scouts and teams that he’s more than just speed.

Of his 98 career receptions at Alabama, 24 resulted in touchdowns. He has the ability to control the ball with his hands and quickly explode upfield for huge plays. When it comes to his wingspan, Ruggs measured out at 74 4/8” with 30 4/8” arms. His height/weight was at 5-foot-11, 188 pounds – which is good.

According to Daniel Jeremiah, a former NFL scout and analyst on NFL Network, he has Ruggs as his No. 3 receiver.

(Updated Top 50 will post on Monday morning on https://t.co/IioVYRRm2b)

He believes the speedster could be the No. 1 guy taken at the position.

Not too many players carry the same height/weight from college to the NFL Combine; nevertheless, Jerry Jeudy did.

Hailing from Deerfield Beach, Fla., he measured at 6-foot-1 and 193 pounds. The former five-star looks to put a show in the 40-yard dash, on-field drills and other stations, as he projects as a top-10 to top-15 pick. His wingspan came to 76 inches.

He spent his final collegiate season at Oklahoma, but Jalen Hurts played three years at quarterback for Alabama.

His height/weight of 6-foot-1, 222 pounds was very solid for an individual that wants to prove he is more than just a developmental project at the position. As for his hands, they came close to 10 inches at 9 6/8”.

Aside from Tagovailoa, the trio of Jeudy, Ruggs and Hurts will compete in the bench press on Wednesday and have on-field workouts on Thursday via NFL Network.