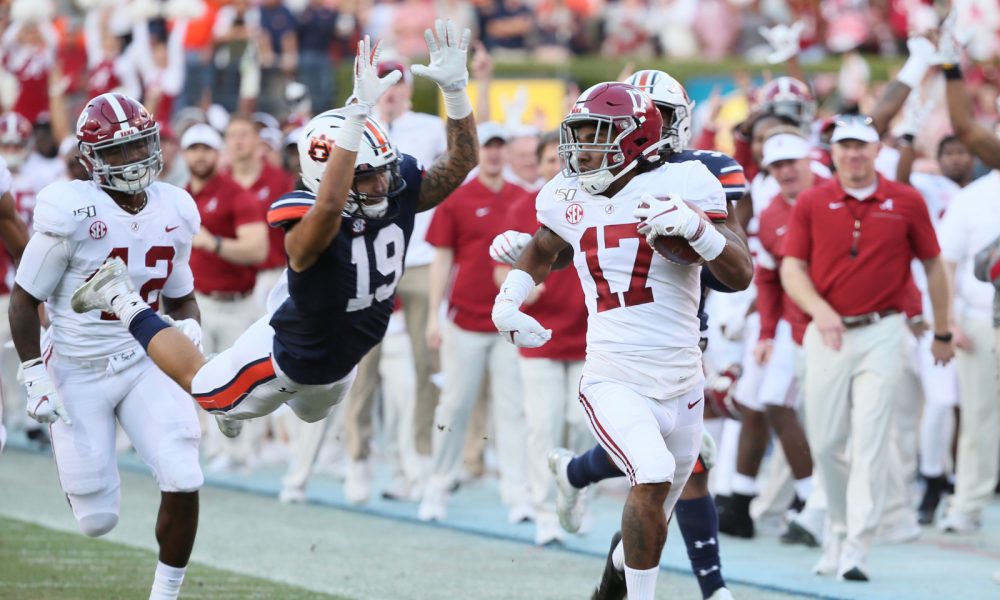 For those who watched his video on Twitter, a more pressing desire for football lies on the faces of Alabama fans.

He came to the Crimson Tide in 2018 and after two seasons of explosive play, Jaylen Waddle will enter his junior year in the fall. A native of Houston, Texas, he brings so much excitement to Tide fans as a receiver and return specialist.

The 5-foot-10, 182-pounder was Freshman of the Year in the Southeastern Conference – totaling 848 yards receiving with seven touchdowns on 45 catches. He also ranked fifth in the nation for yards per punt return (14.6).

He turned in 560 receiving yards with six touchdowns, while adding one punt return score and a kick return touchdown to his line.

Once a four-star prospect, he was credited with a performance for the ages versus Auburn.

Despite a 48-45 loss, Waddle embarrassed the Tigers defense as he tallied four scores – including a 98-yard kick return for a touchdown.

He and Mac Jones established a connection in the matchup, seeing how Waddle brought in four passes for 98 yards with three touchdowns.

His return puts a lot of pressure on defensive backs and opposing defensive coordinators.

Per a video from Ro Simon Jr., a trainer in Houston, Waddle was doing footwork, agility and change of direction maneuvers in a sand pit.

Throughout his movements, he kept his concentration and caught passes.

With today’s NFL moving toward the smaller, quick-twitched receiver, Waddle will be looked upon as a first-rounder for the 2021 draft.

Hopefully, we have football this fall and gain another opportunity to see Waddle in action.