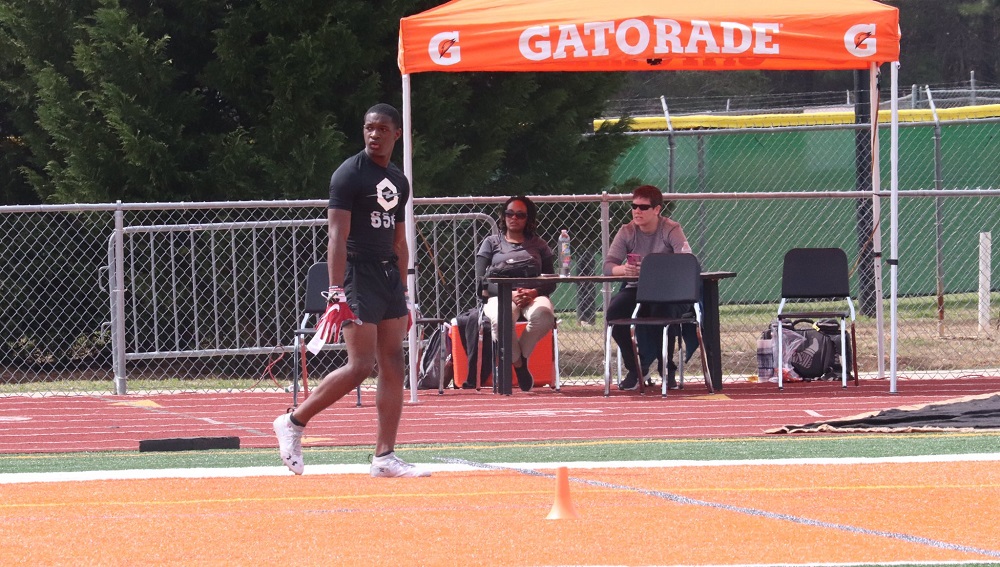 Alabama’s 2020 wide receiver signee, Javon Baker, is not the most talkative person as he tends to let his game speak for itself.

Scheduled to hopefully enroll into the University of Alabama in June, Baker is working hard to make sure he is ready to show what he can do the moment he steps on campus. A workout schedule, which consists of time on the football field and on the track is helping the McEachern product stay on pace. Under the toolage of TJ Brown, a wide receiver specialist at Top Shelf Performance, Baker has been working on this opportunity for two and a half years now.

“When I first met Javon, the biggest thing that stood out was his hands,” Brown said. “He was able to catch everything that came his way. I first met him when I was helping coach the Cam Newton Foundation and we had him, Jadon Haselwood (Oklahoma) George Pickens (Georgia) and those freakish athlete type guys. Javon was one of the younger guys then and he had to step it up to get notice and he did.”

Baker showed off his hands during his senior season for the Indians as well. The Alabama signee pulled in 11 receiving touchdowns en route to a nice season for McEachern. Although his hands and his route running have a lot of Alabama fans excited, his biggest asset stands behind the scene.

“What a lot of people do not know is that Javon’s biggest asset is his work ethic,” Brown added. “For him to be a kid of his caliber with all the attention that comes his way, he really does not care too much about that. He just continues to work. If we workout today, he will call begging me tomorrow to do it again. He strives for perfection and wants to be great at everything. If he messes up on a route, he is going to do it five or six times until he gets it right. ”

The Day @CalvinRidley1 & @javondbaker7 was going back n forth! Good to see a Bama alumn giving the Next Bama receiver up some Free Game by not only telling him but showing him as well. Respect my Brudda pic.twitter.com/0MLTVnpH9S

Top Shelf Performance and Brown have worked with some great wide receivers in the past. Not only have they work with current college stars, but they have also work with some NFL talent, including Calvin Ridley and Mecole Hartman. According to Brown, Baker draws comparisons to those guys, but he also does something, that differentiates him from those guys during their high school days.

“Some kids do not come out of the gate, ready to dog you,” Brown said. “They have to get woke up. You have to talk to them or they have to get jammed up before they get locked in. With Javon, he is coming out of the gate trying to embarrass you. If you jam him up, he is going to come right back at you. That is why I think he is going to dominate at the net level with his competitiveness.”

Alabama signed three wide receivers in the 2020 recruiting class. With the departure of Jerry Jeudy and Henry Ruggs III, several players will be jocking for a chance to work their way into the wide receiver rotation for Alabama. Baker will look to take his chance with his competitiveness at the forefront.

Breaking: NCAA approves student athletes return to campus
Executive Director of Senior Bowl said DeVonta Smith was the ‘most complete’ WR for Alabama in 2019
To Top
%d bloggers like this: