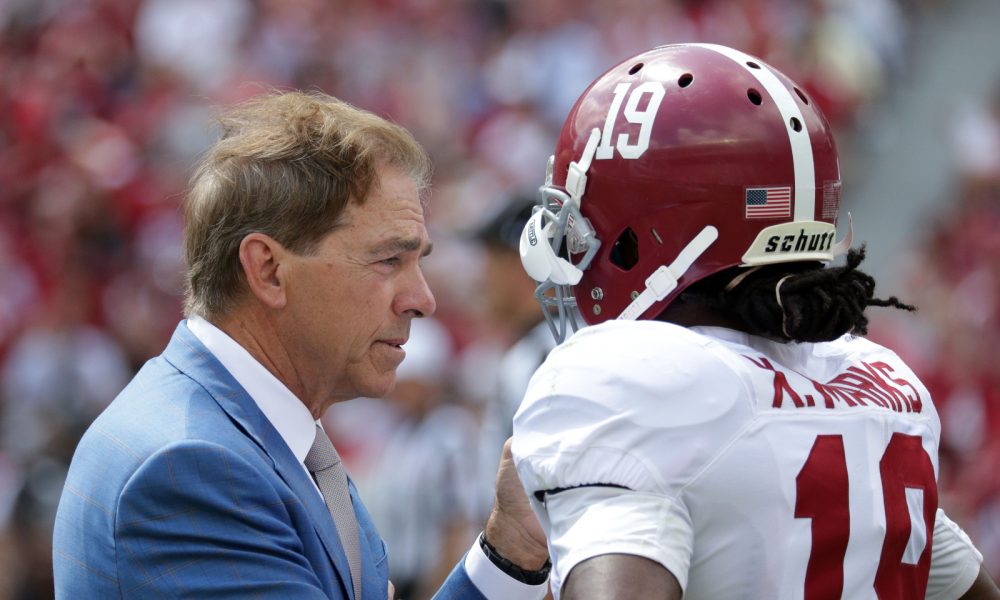 One person whose words carry an intense amount of weight is Nick Saban.

He said upon his arrival to the University of Alabama in 2007 that he would give fans a program it would be proud of, and he delivered with five national championships.

Saban’s influence on the sport of college football has had rules changed and it awarded him with a 10-game, conference-only schedule.

More so than that, his love and willingness to support his players led to the iconic “Black Lives Matter” tribute — which featured offensive lineman Alex Leatherwood as the writer of the piece.

This moment had parents of athletes in the 2020 recruiting class proud to have their child at Alabama, and it jump started the efforts for the 2021 cycle.

RELATED: Power Five Conferences headed towards cancelling football and all other fall sports

He’s done so much for the Crimson Tide and while his peers take pride in wanting to beat him on the field, another opportunity has emerged for Saban to help the sport. Over the weekend, there has been a growing concern as to whether or not college football should be played.

The Coronavirus pandemic has affected the entire United States and with football being the closest contact sport, university presidents are feeling the outside pressure of it not being a smart idea to have a season in the fall.

Despite the notion, student-athletes really want to play. Aside from an enormous damage to the economy, not having a football season puts players at a bigger risk.

For many of these young men, if they return home, they go back to a disadvantaged environment that has very little to no healthcare.

Also, returning home presents an increased probability of contracting the virus and transmitting it to others.

Some athletes do not have an active mother or father in the household and if both parents are not active, they rely on grandparents, aunts, uncles, cousins or foster parents for guidance.

With this being mentioned, there are multitudes of players that view the gridiron game as their only way out of a rough situation.

For those, the mission becomes football or succumb to undesirable activities.

After it was the first conference of the Power Five to transition to a conference-only look, the Big Ten now appears to be the first one that wants to cancel football altogether.

Nothing has been said by the SEC, Big 12, Pac-12 and ACC, but the Big Ten expects the other four conferences to side with it.

Here is a moment for Coach Saban to step up and demonstrate his leadership, in terms of caring for athletes.

NFL Draft experts have spoken on the contracts that Lawrence and Fields could earn if they opt out and prepare for the 2021 draft; however, money does not drive them.

There’s been too much work put in!! #WeWantToPlay

Both players, along with others, relish this chance to be with their teammates.

In a society that has become filled with confusion, chaos, division, negativity and fear, we need athletics more than ever.

Saban embodies all of these characteristics and he instills these traits into his players to be better men.

Right now, athletes around the college football landscape do not want this season ripped from them.

They need a voice to stand for them and Saban must become that voice.

Nick Saban provides an injury update that involved having fun with his granddaughter
Nick Saban on endorsing a candidate for 2020 Presidential Election: “That is not my place”
To Top
%d bloggers like this: