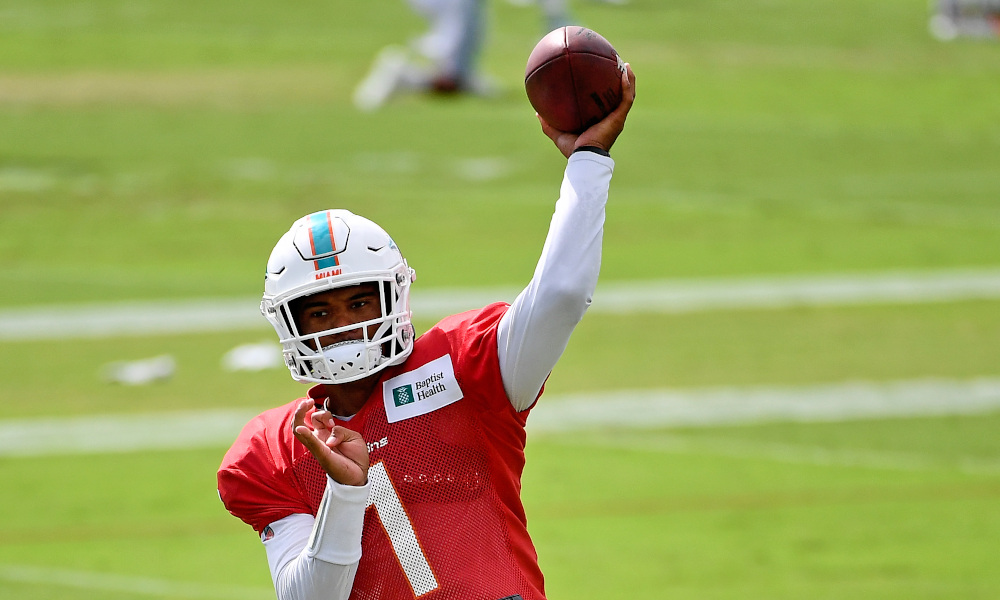 Whether it was the Elite 11 competition, the University of Alabama or now in the National Football League, Tua Tagovailoa has always been able to rebound after tough situations.

He took hard coaching from Trent Dilfer, responded with a pass to win a national championship for Alabama — after taking a bad sack — and this mindset continued on Monday at training camp for the Miami Dolphins.

Ryan Fitzpatrick was absent on Friday of last week, which gave Tagovailoa and Josh Rosen a chance to step up.

Both guys struggled and the former Crimson Tide standout had two interceptions.

As the No. 5 overall selection in April, Tagovailoa quickly put that performance behind them.

According to Cameron Wolfe, an ESPN reporter for the Dolphins, the native Hawaiian tossed for three touchdowns on Monday and lit the field up.

The trio of Malcolm Perry, Ricardo Louis and Gary Jennings all benefitted from Tagovailoa.

Great day of practice for Tua Tagovailoa, his best yet. He opened it up a bit and threw 3 pretty TDs ?

– A 69-yard bomb to Malcolm Perry on a go route, best throw of the day.
– A 25-yarder in traffic over the middle of the field to Ricardo Louis
– Short corner to Gary Jennings pic.twitter.com/HsYgriBhFZ

His 69-yard bomb to Perry was reminiscent of the big plays he made at Alabama.

He continues to look healthy in camp and while we don’t if he will start week one, the Dolphins love Tagovailoa’s confidence.