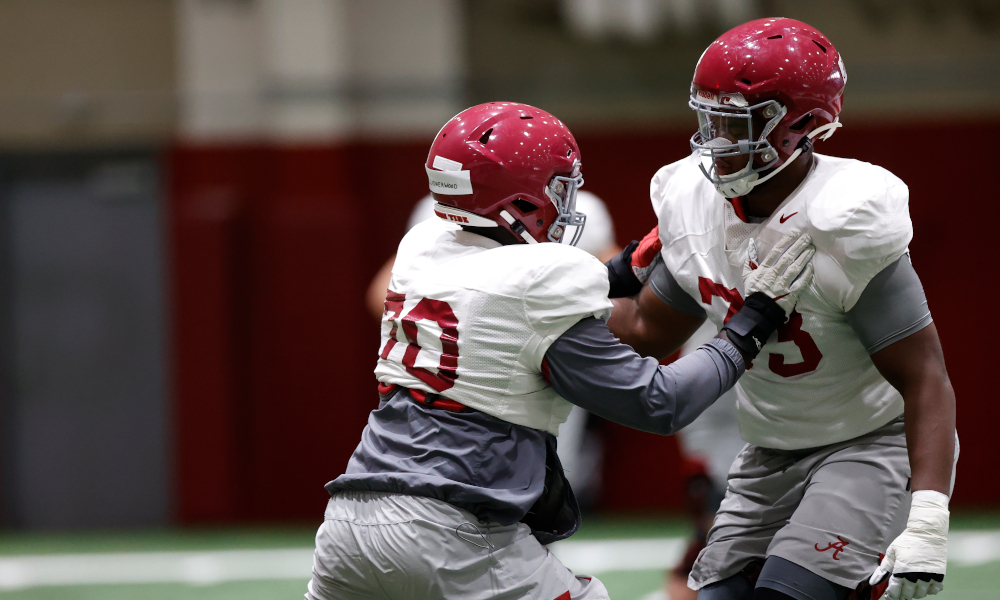 With fall practice in full swing for Alabama football, the staff for Touchdown Alabama Magazine will release a series of player spotlight pieces on starters and marquee contributors for the 2020 football season.

After looking at the first true freshman and fifth offensive player in Bryce Young, Alex Leatherwood is next.

Summary: Alabama fans got a taste of how good Alex Leatherwood could be at the 2018 College Football Playoff National Championship meeting with Georgia.

When an injury forced Jonah Williams out of the game at left tackle, Leatherwood came in off the bench and protected true freshman quarterback, Tua Tagovailoa.

He allowed just one sack in 44 snaps — grading out at 88 percent — and helped the native Hawaiian throw for three touchdowns in a 26-23 overtime win over the Bulldogs. A year later, Leatherwood started all 15 games at right guard and earned second-team All-SEC honors.

He guided Tagovailoa to single-season school records for passing yards (3,966), scoring tosses (43) and total touchdowns (48), en route to Alabama winning a Southeastern Conference title. The native Floridian assisted Tagovailoa to a host of individual honors, including being a finalist for the Heisman Trophy. The 6-foot-6, 312-pounder moved to left tackle in 2019 and missed only seven assignments in 752 snaps, which is good for a 99.1 percent success rate.

Despite giving up two sacks, he graded out at 89 percent and was named first-team All-American via American Football Coaches Association.

Regardless of Tagovailoa sustaining both ankle and hip injuries, Leatherwood still propelled him to 33 touchdown passes to three interceptions.

He also positioned Mac Jones to have big success late in the year, while clearing Najee Harris to have his first career 1,000-yard rushing (1,224) campaign with 13 touchdowns on 209 carries.

To pair with his size, Leatherwood has great athleticism and length.

It is difficult for defensive linemen and outside linebackers to get around his frame, which allows him to be an exceptional run blocker and pass protector. He may not be the biggest talker off the field, but he’s the best communicator on it.

With him choosing to return for his senior season, Alabama’s offensive line will be in contention for the Joe Moore Award.

Summary: As good as he was last season, speedy edge rushers had success against Leatherwood.

Both sacks he allowed came against K’Lavon Chaisson of Louisiana State University.

When Chaisson tried Jedrick Wills at right tackle, the Kentucky native shut him down. Wills’ performance throughout the matchup went a long way in him getting picked at No. 10 overall by the Cleveland Browns in this year’s NFL Draft.

One of the reasons why Leatherwood came back was to prove he can consistently handle the best speed rushers in college football.

He does not want to allow a sack; however, that is only one of Leatherwood’s goals.

Winning the Joe Moore Award, Outland Trophy and unanimous All-American honors are other things on his mind.

Once a five-star prospect, Leatherwood is aiming to get the Tide to an SEC Championship and a national title — especially after it has gone back-to-back years without a CFP trophy. Along with these aspects, he wants to continue the trend Alabama has with offensive tackles going in the first round. Since 2009, Nick Saban has had five tackles selected as first-rounders.

Alex Leatherwood returns as one of the best, if not the best, offensive tackles in college football.

He has all the tools needed to be successful at Alabama and in the NFL. If he and the Crimson Tide can stay healthy and execute, this is a dangerous team. Leatherwood wants to get Harris his second 1,000-yard rushing campaign, while protecting Mac Jones to a 3,000-plus yard passing season. He and the Tide will face Missouri to open its season on Sept. 26.