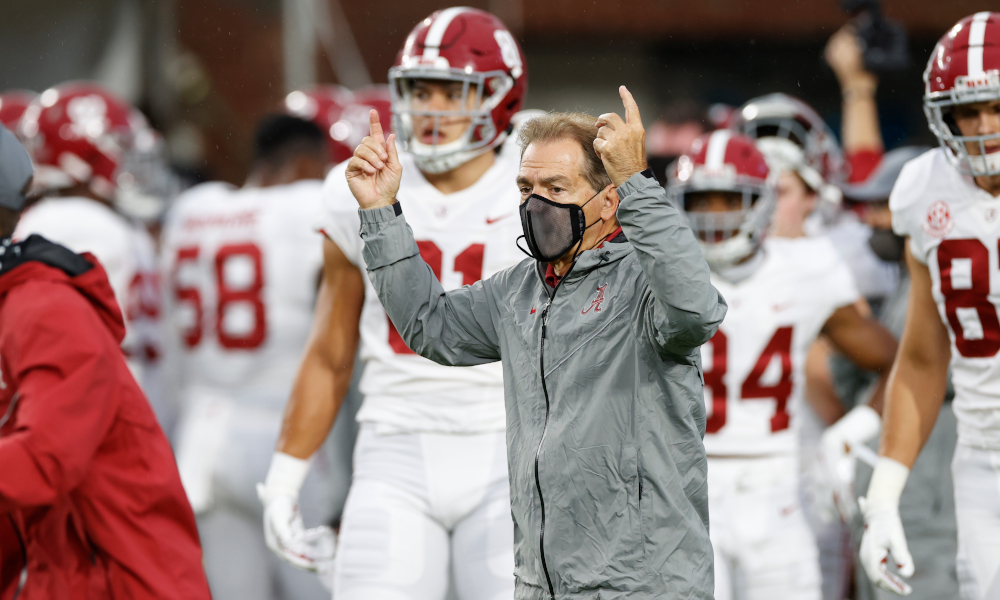 He received positive test results for Coronavirus on Wednesday, but Nick Saban has not been experiencing any symptoms from the virus.

According to an update from the University of Alabama, the head football coach was evaluated on Thursday and remains asymptomatic.

While he continues in self-isolation and following the SEC testing protocol, the question all Crimson Tide fans have is will he be available to coach the matchup versus Georgia on Saturday?

Alabama is scheduled to host the Bulldogs at Bryant-Denny Stadium at 7:00 p.m. CT via CBS.

Coach Saban has been an advocate for public healthy and safety since the outbreak of the global pandemic, so it surprised him to get a positive test. During his presser, he appointed Steve Sarkisian to operate the football program as he works remotely. He has not decided on how much autonomy Sarkisian would have to make his own decisions in the game; however, Saban said the Tide had a protocol in place for any coach that tested positive for COVID-19.

“Obviously, Sark has been a head coach before,” Saban said. “I’m not sure exactly how this is going to play out, in terms of when the game comes, whether I can have communication with people or not… so, we will have to research and figure that one out. We did have a plan for each coach on the staff as to what might happen and we just have to go from there.”

If Sarkisian has to coach the game, Saban said he would not have anyone else call the offense.

“He has done a really good job of that,” Saban said of Sarkisian. “We are not going to make those changes. We have a very capable staff and those guys make good game day decisions. I just monitor what they do and make sure we are staying on the rails and I think we can get that done, even if I’m not available.”

Saban is hopeful to not be out for Saturday’s game, but he has a lot of trust in his staff.

When it comes to a solution of having him for the contest, ESPN’s Heather Dinich has one.

Per Dinich via College Football Live, if Saban has three straight negative PCR tests — while remaining asymptomatic — he can leave isolation and return to the team.

“As I’m sitting here right now, I got confirmation from the SEC office that if Nick Saban or anyone else for that matter were to get three straight negative PCR tests and remain asymptomatic, they could leave isolation and rejoin the team. It’s important to note that Nick Saban is asymptomatic. He’s continuing to be tested daily. if he gets three negative tests, you could see him on the sideline against Georgia, which as of now, remains on.”- Heather Dinich via ESPN

A possibility to have Saban on the field is still there.

After being evaluated on Thursday, two more tests should come. If he is negative on both, Saban takes the field versus Georgia.

For a top-three matchup in college football, Saban does not want to miss the action.