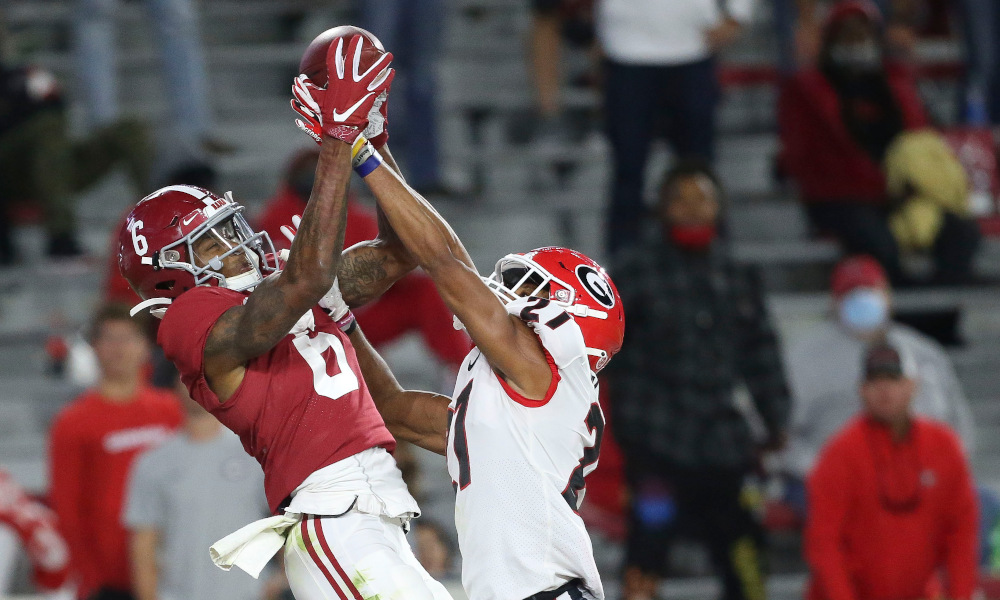 People from the state of Louisiana have an unshakable sense of confidence.

DeVonta Smith took on the form of former NFL wide receiver, Chad Johnson for Alabama over the weekend versus the Georgia Bulldogs at Bryant-Denny Stadium. Johnson, formerly known Chad Ochocinco, had the quickest feet in the game for 12 seasons and he felt like no one could guard him. Because of this, Johnson would even tell defensive backs his routes just for fun.

RELATED: Malachi Moore has been a bright light on a defense still finding its way

As a true freshman, Smith stunned Georgia fans with a 41-yard, game-winning touchdown reception from Tua Tagovailoa in the 2018 College Football Playoff National Championship Game. Three years later, Smith is a senior and was mouthing the words “I got you” to his teammates on the sideline as he put the Crimson Tide on his back. After not recording a single catch in the first quarter, the former four-star turned into every comic book superhero for Mac Jones and the Tide during the second period.

(but really, this is actually how they wanted the play to work) pic.twitter.com/QzQkFrGiZX

Regardless of sharing responsibilities with Jaylen Waddle and John Metchie, Smith has separated himself as the best route runner and most complete receiver in college football.

The 6-foot-1, 175-pounder is looking like a top-5 to top-10 selection for the 2021 NFL Draft and potentially the first receiver taken off the board.

Six of his game-high 11 receptions came in the second quarter, including one for a touchdown.

Four of the six catches he made came on a drive that ended with a 33-yard made field goal from Will Reichard, to trim Georgia’s lead to 14-10.

His second score in the fourth quarter, which was a thing of beauty, pushed Alabama to a 41-24 lead and it won by that score. Smith showed his ability to elevate, box out a defender and maintain his balance while making a catch.

Ten of his 11 catches resulted in either first downs or scores as he averaged 15.2 yards per catch.

DeVonta Smith is really, really good…that’s really all you can say. pic.twitter.com/rIYop9K6zM

Smith comes off his second consecutive 100-yard performance, totaling 161 yards versus the Bulldogs. He tallied a career-high 13 receptions for 164 yards against Mississippi, but Smith has a knack for dominating big games.

The best compliment he has received as a player came from his quarterback. In his post-game interview on Zoom, Jones said Smith is a ‘Michael Jordan-level competitor.’

“When a guy looks you in your eyes and says, ‘Throw me the ball, I don’t care if I’m triple-covered,’ it’s hard to turn that down,” Jones said of Smith.

This is high praise for Smith, especially when one considers the desire to win that Jordan had.

Smith carries this same mentality. He works every day with a jug machine after practice.

He wants to catch every pass in his direction, no matter the arm angle, placement or how the ball comes to him. Smith has been an absolute joy to Coach Saban and never shies away from taking over a game, if he needs to do it. Through four games, he is averaging 120.8 yards per matchup and has 483 yards receiving with four touchdowns on a team-high 38 receptions.

Smith has 27 career scores, which means he is four away from tying Amari Cooper (2012-14) for the all-time record in school history of 31.

He and the Crimson Tide will travel to Neylan Stadium to face the Tennessee Volunteers this week.