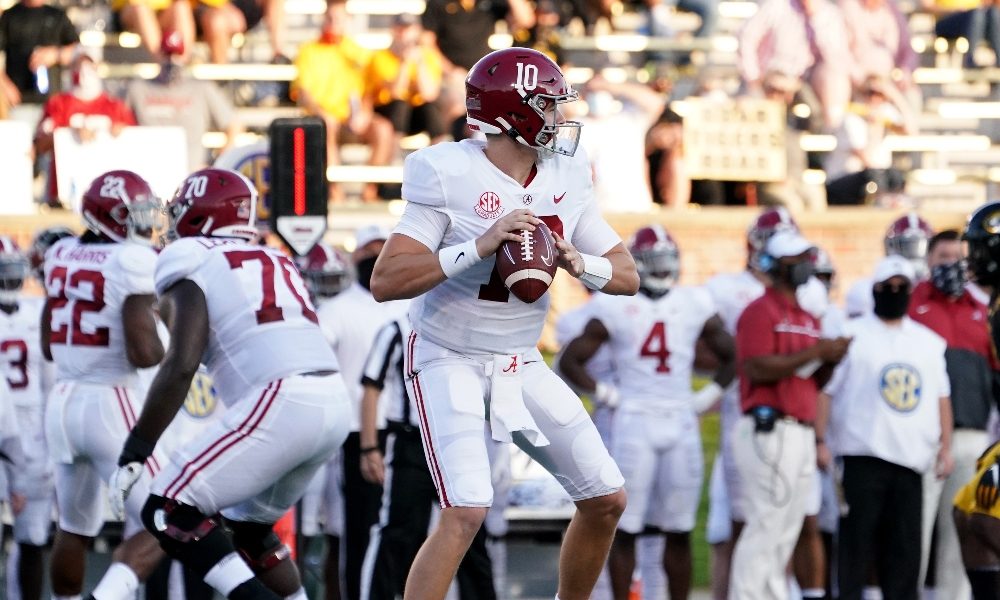 The rise of Mac Jones has made this college football season fun to watch.

Alabama football is known for reloading talent at every position, but not a lot of people envisioned Jones replacing Tua Tagovailoa and having this offense perform at a high level. A junior from Jacksonville, Fla., Jones has this group soaring under Steve Sarkisian (Alabama’s offensive coordinator) as the Crimson Tide leads the Southeastern Conference for scoring offense (47.2 ppg) and total offense (555.2 ypg).

Alabama is also third in the nation in points and fourth in yards per game too.

When it comes to the SEC, Jones leads the conference in completion percentage (78.5), passing yards (2,196), passer rating (210.3) and total quarterback rating (95.5). He is the only signal caller in Tide history with three straight 400-yard passing games and has 16 touchdowns to two interceptions. After hearing Todd McShay — ESPN NFL Draft analyst — project Jones at No. 28 overall (fifth quarterback) on his first-round board, Mel Kiper Jr. has the first-year starter going first round as well.

On Saturday, Kiper joined Laura Rutledge of SEC Nation and told her that he has Jones at No. 24 on his big board.

“His deep ball accuracy has been phenomenal,” Kiper said of Jones.

Big experience as a starter is the lone issue Kiper has with Jones.

He had four starts in 2019 and six starts this season. Jones has a chance to end his career with 17 starts, provided if the Crimson Tide is able to face LSU and make the College Football Playoff.

Kiper said he would like to see Jones return to school next season and get more experience, due to his lack of starts may be a reason teams talk him down in the draft.

For now, his focus is on leading the team to a win over Kentucky.

Alabama will battle the Wildcats next week at Bryant-Denny Stadium.

Stephen’s projected risers, fallers and sleepers of Alabama football for 2021 NFL Draft
To Top
%d bloggers like this: