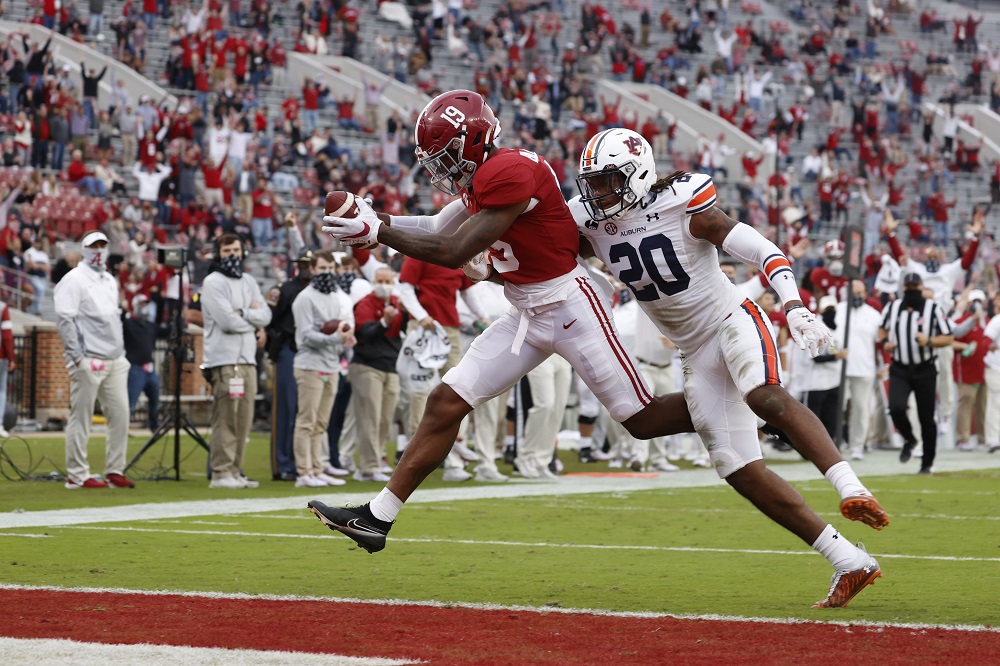 It is more than Alabama’s defense that is peaking at the right time.

Although it lost Jaylen Waddle (ankle) for the season, Steve Sarkisian has gotten another offensive weapon to emerge for the Crimson Tide in the last two weeks. Jahleel Billingsley, a sophomore from Chicago, Ill., is a talented playmaker at tight end who arrived on campus in the 2019 signing class. Things started to click for him during the latter part of his freshman season, and he made huge plays versus Kentucky and Auburn. Prior to Alabama’s 63-3 dominant win over the Wildcats, Billingsley totaled one reception for 13 yards. He caught three passes for 78 yards against Kentucky, and then totaled two catches for 33 yards — including a 24-yard touchdown — in the 85th Iron Bowl meeting with Auburn as the Tide rolled to a 42-13 victory.

The 6-foot-4, 230-pounder has improved as a blocker; however, he is a highly skilled route runner.

Everyone is excited about Billingsley, especially John Metchie. The sophomore wide receiver came in the same class with Billingsley and told reporters there is a lot more to the tight end’s game that has not been seen. Players such as Metchie, DeVonta Smith and Najee Harris have drawn much attention from defenses. Slade Bolden has played more and the Tide would like to get one of its true freshmen to step up at receiver. However, is Billingsley the one set up for a marquee performance versus LSU?

In the Nick Saban era, O.J. Howard and Irv Smith both caught touchdown passes against the Tigers.

Howard made an impact as a true freshman in 2013. He grabbed a short, slant pattern and weaved his way through LSU’s defensive secondary for a 52-yard score at Bryant-Denny Stadium. Howard brought in one of AJ McCarron’s three scoring tosses that year, and the Tide earned a 38-17 win.

During a 2018 meeting between the Tide and LSU, Smith posted four receptions for 64 yards — including a 25-yard score from Tua Tagovailoa — in Alabama’s 29-0 victory at Tiger Stadium.

Ed Orgeron and LSU will have its best cornerbacks on Smith and Metchie, which may provide favorable matchups for Billingsley.

The Tigers, on the other hand, have an athletic player in Arik Gilbert at the position. A native of Atlanta, Ga., he chimes in with 339 yards receiving and two touchdowns on 30 receptions.

RELATED: Will Nick Saban run the score up on Ed Orgeron and LSU Tigers?

Gilbert could have a more difficult time gaining separation, seeing as how LSU lost its two main receivers to opt outs.

This will allow Alabama’s secondary to focus more on the freshman. According to Saban, Billingsley has been playing with more confidence.

Alabama wants to get him the ball more, and this week looks like a strong opportunity versus a struggling defense.