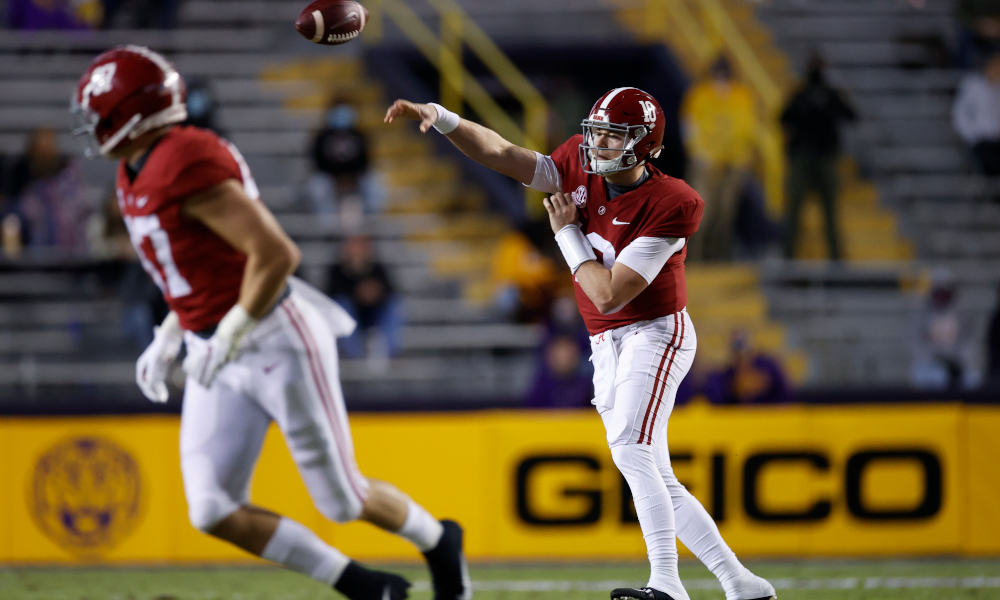 He avenged Tua Tagovailoa’s loss from 2019, helped Nick Saban send a major statement, and may have possibly locked in the Heisman Trophy for himself over the weekend.

In a season filled with adjustments, due to the Coronavirus, Mac Jones has Alabama back in the Southeastern Conference Championship Game.

For the first time in the Alabama-LSU series, the Crimson Tide was responsible for totaling 50 points and Jones led it to 45 in the first half.

He had a moment in the first quarter that felt like a video game, as Jones had completed his first 11 passes for 243 yards with three touchdowns.

He has been referred to as a “game manager” and some consider his dominance based on the receivers he has, however, the junior has proven all year that he is the leader on offense and the team is with him.

RELATED: Landon Dickerson jokingly gives an update on his health after his chest bump against LSU

With the same mindset he took against Georgia, Jones dismantled a defensive secondary that is full of talent.

As for Derek Stingley, JaCoby Stevens, Eli Ricks and Cordale Flott, the group was torched for 385 passing yards and four touchdown passes at Tiger Stadium. Jones constantly went after Stingley, hooking up with DeVonta Smith for a game-high eight receptions for 231 yards and three scores. He targeted seven different receivers — including Jahleel Billingsley.

Within his 20 completions (28 attempts), 13 of his completed throws resulted in either first downs or scores. Jones’ outing versus the Tigers was the seventh time he completed at least 70 percent on passes, the eighth time he posted a quarterback rating of least 95, the fifth time he’s tossed for four scores, and the sixth time he has recorded at least 300 yards.

The remarkable thing in all of this was Alabama also had balance with its run game.

Najee Harris made Jones more effective, as he collected 145 yards rushing and three scores on 21 carries.

Regardless of the success Kyle Trask is having at Florida, the Gators are one-dimensional on offense.

Because of its inability to generate a balanced attack, Tennessee kept the matchup with Florida close. Trask, unlike Jones, has three games with a total QBR of at least 95 and two games with a completion rating of at least 75. Jones has guided Alabama to eight straight 40-point games, dating back to week two versus Texas A&M, including a pair of 60-point finishes this season.

Trask has the Gators with five 40-point contests.

To pair with the current numbers, Jones is the fifth quarterback of the Nick Saban era to account for 3,000 passing yards in a single season. He joins former standouts AJ McCarron, Blake Sims, Jacob Coker and Tua Tagovailoa in accomplish the feat.

RELATED: How Alabama fans reacted to Alabama win over LSU

Also, his 27 touchdowns are sixth all-time in school history for a single season.

As of this moment, he has the tightest grip on this year’s Heisman Trophy race.