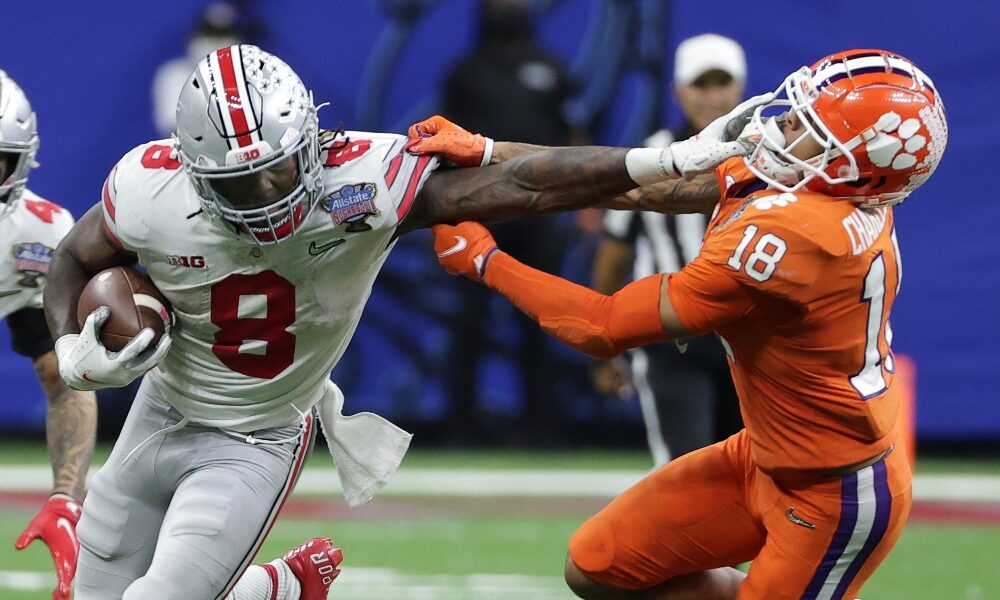 The closing weeks of the season are when coaches want their players to play at their best. And that has certainly been the case for Ohio State running back Trey Sermon.

After transferring from Oklahoma this season, Sermon was not supposed to be a focal point in the Buckeyes offense. Although he was eyed as a contributor no one imagined he would turn into one of the most dangerous ball carriers in the country, down the stretch of the season.

His tear began against Michigan State back on Dec. 5 when he rushed the ball 10 times for 112 yards and a touchdown against the rival Spartans. After a cancellation against Michigan and the roster being stricken with COVID-19 positive tests, Ohio State’s offense was depleted headed into the Big Ten Championship against a hungry Northwestern team.

“… The Big Ten Championship game was when he really took off,” head coach Ryan Day said when asked about Sermon’s emergence. “As early as that. I mean, it was probably the second half is when I really realized what was going on. He was running hard, but then it just kind of went to a second level, and then he played great last week.”

Just as Day said that was the game Sermon became a household name as he rushed for an alarming 331 yards and two touchdowns averaging 11.4 yards per carry against the team with the best rushing defense in the country. He only followed up that performance with 193 yard game against Clemson in the College Football Playoff and is now circled, highlighted and starred on Alabama’s scouting report.

Defending the run was an area of concern for the Crimson Tide last season, but in 2020 it has performed better. Alabama currently ranks 13th in rushing defense allowing just 3.21 yards per carry and an average of 110 yards per game.

But looks can be deceiving, for the Crimson Tide have only faced four teams who rank inside the top 50 in rushing per game in the NCAA and against those teams, Alabama surrenders an average of 145.25 yards. Notre Dame was the best running team Pete Golding’s defense went up against this season which was ranked 24th in the country and it gave up 139 yards in the Rose Bowl.

Ohio State enters the national championship game with the fifth-best rushing attack in college football which is a significant step up. And a lot of that has to do with Sermon.

One of the ways Sermon has been able to have success of late is his ability to shed the first tackler and exploit the defense’s missed opportunities. In a way his tear is comparable to one former Buckeye tailback Ezekiel Elliot whom Crimson Tide supporters know very well from the last time the two faced off.

“I think we’ll get his best,” Golding said last Thursday during a Zoom conference. “We normally get everybody’s best, and I think he’s playing at a really high level. I think he runs the ball effectively, he runs behind his pads. I think he’s explosive. I think he does a nice job understanding their blocking structure up front and follows blockers and has patience when he needs to.

“But he’s one of those guys where you give him the seam, he can take it. I think he’s got breakaway speed, and then he still has the ability to catch some out of the backfield.

“So I think he’s playing at a really high level. I think we’ll get his best on Monday. Obviously, I think they’re going to give it to him a fair amount, and we’ve got to do running our feet on contacts and peppering the ball carrier and getting 11 guys to the ball, because he’s a really good player and they’ve got a good front to block for him.”

Stopping Sermon will begin upfront for the Crimson Tide who will be going up against a physical Ohio State offensive line headlined by unanimous All-American Wyatt Davis. Closing holes and keeping contain will be key, but the players like Christian Harris and Dylan Moses are going to need to be able to shed these blockers as well and make sure-handed tackles.

Against the elite’s Alabama has struggled, but in order to win the game, the defense may only need to try and slow Sermon down rather than completely take him away.

Either way, he will be a formidable foe for the unit.