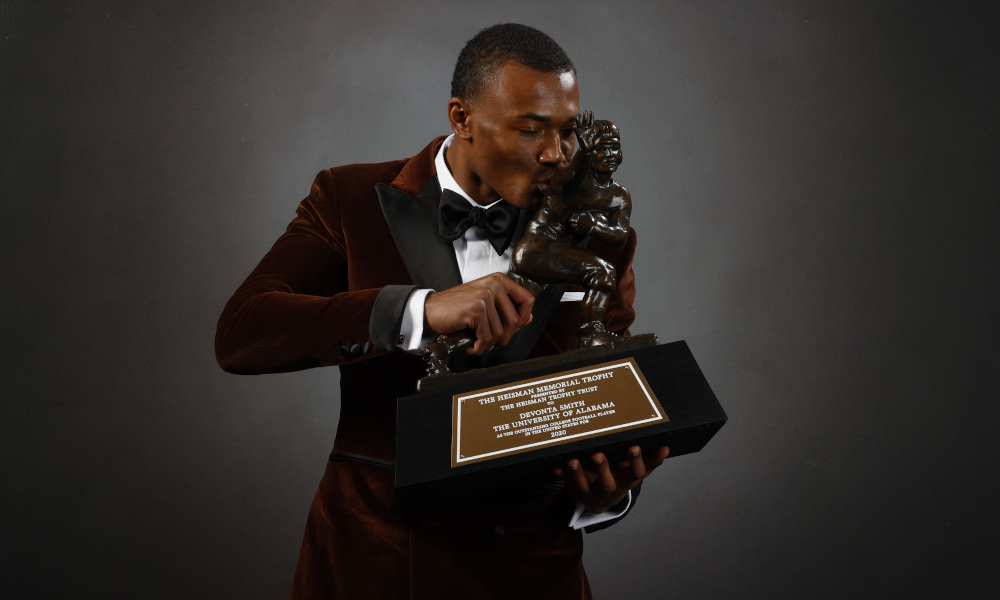 He does not talk a lot, but every move DeVonta Smith makes is calculated.

His savviness on the field at wide receiver took him from a game-winning catch on “2nd and 26” to becoming the greatest offensive playmaker in the history of the University of Alabama in football. Smith is the third Crimson Tide player to win the Heisman Memorial Trophy, and he did it with an incredible junior season. He recorded 117 receptions for 1,856 yards with 23 touchdowns, leading college football in all three categories. The 6-foot-1, 175-pounder holds every school record at his position while holding Southeastern Conference career marks for receiving yards (3,965) and scores (46).

After pacing the Tide to a national championship in 2020, Smith is one of the top receivers in this draft and projects as the No. 1 prospect at the position.

On Tuesday, he was on the “Club Shay Shay” podcast with Shannon Sharpe.

Sharpe, who played 13 years in the National Football League (1990-03), was a three-time Super Bowl champion, four-time first-team NFL All-Pro, and made the 1990s All-Decade Team.

He was one of the greatest tight ends in league history and was inducted into the Pro Football Hall of Fame in 2011. After his success with the Denver Broncos and Baltimore Ravens, Sharpe has become a superstar in the media.

He is now with Skip Bayless on Undisputed, a sports debate show on Fox Sports One.

In talking with Smith, the Unanimous All-American told Sharpe he has signed with Klutch Sports.

Rich Paul founded the agency in 2012, and it ranks at No. 13 on the Forbes list of most valuable sports agencies as of 2020.

Klutch Sports is known for its pull in basketball as it represents marquee names such as LeBron James, Anthony Davis, Ben Simmons, Draymond Green, and Trae Young. James, a long-time friend of Paul, asked the business owner to be a part of his inner circle during the 2003 NBA Draft process. James was taken No. 1 overall by the Cleveland Cavaliers and Paul has been with him since then. Before inking Smith, Klutch Sports got into the venture of football in 2020.

It signed Jeffrey Okudah and Chase Young, and both project to be major stars in the NFL.

The addition of Smith gives the company its first Heisman winner.

He told Sharpe that signing with Klutch Sports goes beyond football for him.

“It was a better business decision with me,” Smith said on why he signed with Klutch Sports. “It’s just more that I can do and more that I can get out with them. They are making more than just football. They are about putting you out there as a person and building your brand. It’s not just about seeing me as DeVonta Smith, the football player but DeVonta Smith, the person.”

He plays bigger than he is, and part of that is Smith hails from a small place called Amite, La.

Smith has goals of giving back to his community, and it will start by putting together projects with Klutch Sports.

He will also be at Alabama’s Pro Day on March 13, performing a workout for NFL teams.