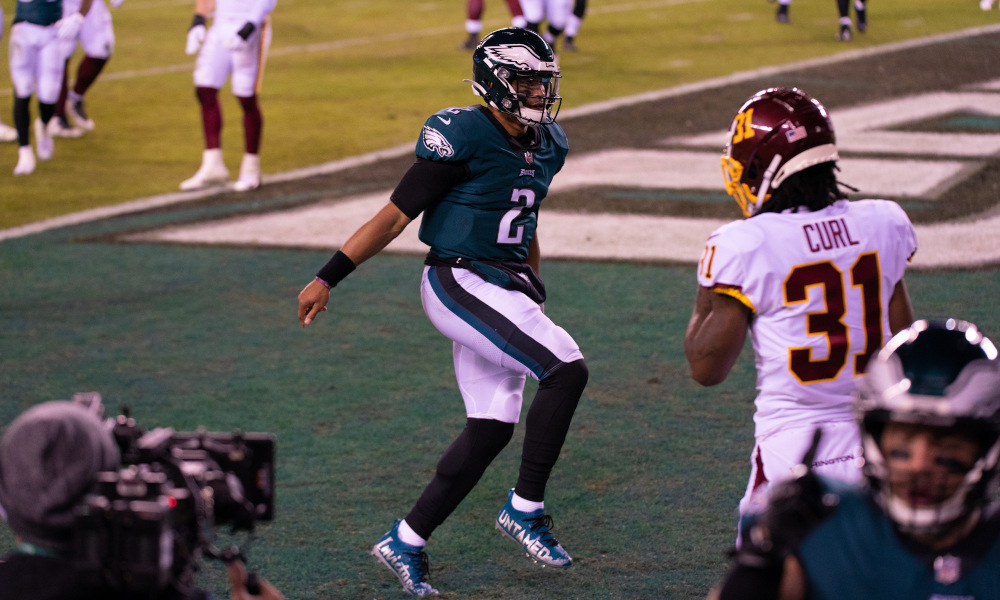 Regardless of what national media thinks, the Philadelphia Eagles are behind Jalen Hurts.

After selecting him in the 2020 NFL Draft, Hurts played in 14 games for the Eagles as a rookie.

He totaled a pair of 300+ yard passing games, including a stellar outing versus the Arizona Cardinals. Despite a loss, Hurts was responsible for 338 yards and four total touchdowns (one rushing). In his first NFL start, the former Alabama signal-caller accounted for 273 total yards (167 passing, 106 rushing) with one score in the Eagles’ 24-21 win over the New Orleans Saints.

Philadelphia did not make the playoffs; however, Hurts brought it new life on offense. He is now the leader in the room, as Carson Wentz is on the Indianapolis Colts. It will be interesting to see what the Eagles do in the draft, but the players are excited for Hurts to lead them. According to Jalen Reagor, he told Adam Lefkoe of Bleacher Report that Hurts ‘just knows how to win.’

“All I tell people is he’s a winner. … When his name was called, he was ready.”@jalenreagor has his QB’s back.

“He is a very versatile quarterback,” Reagor said. “He’s smart. Just the aura of him. He comes into the huddle and commands the huddle. He did not let being a rookie dictate how he played or how his swagger — he keeps the same swagger. We talked maybe two days ago. We talked for an hour about what are we trying to do, where are we trying to go into this season, this offseason, and how we trying to hit the ground running. We have the same mindset. We really see eye to eye.”

Reagor stated how the issues with Wentz did not affect Hurts.

“Before everything happened, he’s been the same,” Reagor said. “He comes to practice, he comes to work. Even when he was on the scout team, he’s out there making the defense work. He’s been the same person, and that’s why when his name was called, he was ready.”

Hurts’ name will be called to lead the Eagles to the playoffs. He has the athleticism, leadership, poise, and arm talent to provide fans something they can be proud of.