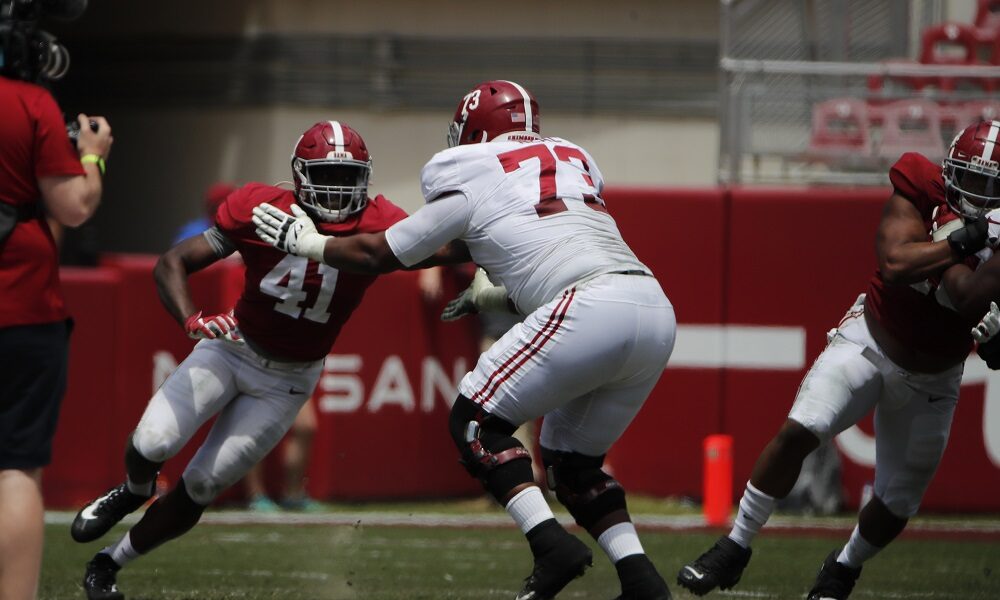 Alabama football has a lot of experience back on defense, but its youth is scary too.

Fans of the Crimson Tide saw impressive feats from young players during the program’s annual A-Day Game in Bryant-Denny Stadium.

Despite an MVP performance from Bryce Young, the first-team offense scored only 13 points.

Demouy Kennedy, a sophomore, led the White Team for total tackles (seven) in a 13-10 victory.

RELATED: Bryce Young takes the next step in his development with strong A-Day performance

He also totaled one sack and one tackle for loss.

Jah-Marien Latham is on the rise for the defensive line. He was voted for the Dwight Stephenson Award, which goes to the most valuable lineman. The 6-foot-3, 285-pound sophomore was stirring up chaos in the backfield all game long. He had four tackles, one tackle for loss, one sack, and two pass breakups for the second-team defense.

Tim Smith crafted his superstar path in 2020, but the sophomore did his thing on A-Day.

He was credited with three tackles and two pass breakups. Chris Braswell, a sophomore, was a superstar for the first-team defense.

He recorded all three sacks for the Crimson Team and tallied five tackles (three for loss) with one forced fumble. Deontae Lawson, a true freshman, is going to be a problem at inside linebacker for opposing offenses.

He will be the next great middle linebacker for the Crimson Tide.

Lawson had much success next to Moody as he collected four tackles (one for loss) and two breakups. He nearly had two interceptions off Bryce Young. Nick Saban spoke a lot about Ga’Quincy “Kool-Aid” McKinstry throughout the spring, and fans understand why he did.

The five-star notched his first-ever interception in a spring game and had three total tackles.

As for Jackson Bratton and Kristian Story, it was fun seeing them too. Bratton had six tackles and one forced fumble, while Story picked off Braxton Barker.

He also had three tackles. Alabama has a lot of hungry young guns on defense. These guys want to make plays, and Saban saw this weekend.

It is going to be fun to watch these players grow in the fall.