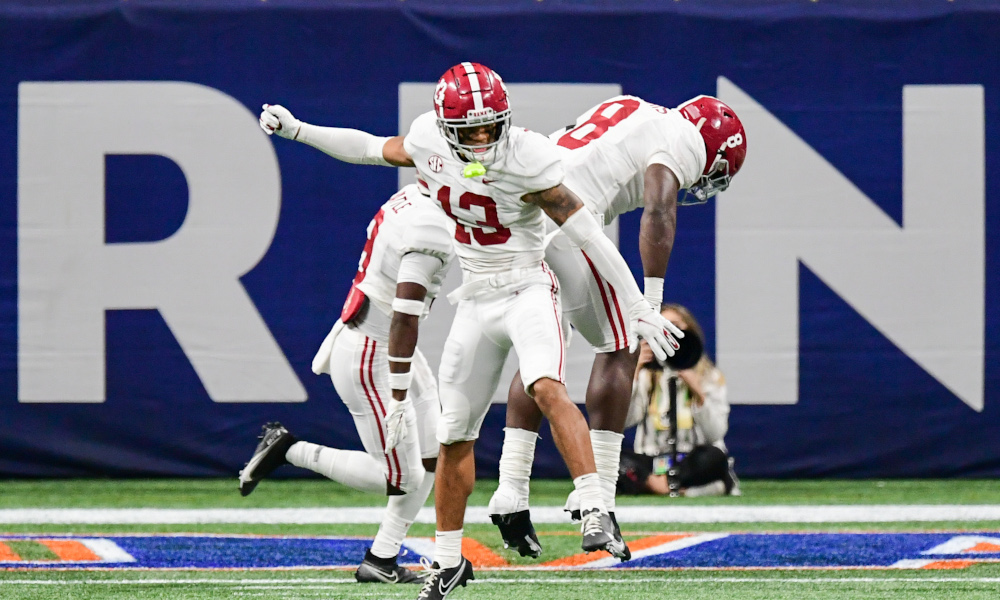 The University of Alabama will have the most respected defensive secondary in college football.

Josh Jobe returns as a starting cornerback, and Jalyn Armour-Davis looks to snatch the second spot. The tandem of Jordan Battle and DeMarcco Hellams will be exceptional at the safety position.

Nick Saban likes what Ga’Quincy “Koolaid” McKinstry brings to the team as a true freshman, and the Crimson Tide has other talented players.

Malachi Moore and Brian Branch are back as sophomores. Both came in the 2020 signing class, and they were assets on Alabama’s undefeated national championship team.

Oct 24, 2020; Knoxville, Tennessee, USA; Alabama defensive back Malachi Moore (13) runs the ball for a touchdown after recovering a fumble by Tennessee running back Eric Gray (3) in the second half during a game between Alabama and Tennessee at Neyland Stadium in Knoxville, Tenn. on Saturday, Oct. 24, 2020. Mandatory Credit: Caitie McMekin-USA TODAY NETWORK

Moore, a native of Trussville, Ala., was a superstar last year. He won the starting job at nickel back (“star”) and played in 11 of 13 games.

He returned a fumble versus Tennessee for a 28-yard touchdown. The 6-foot, 182-pounder finished with 44 tackles (four for loss), six pass breakups, and two quarterback pressures.

He allowed only one touchdown reception, and it came versus Florida in the Southeastern Conference title game. Moore earned a spot on the Freshman All-SEC team and second-team All-SEC.

He was also a Freshman All-American, according to the Football Writers Association of America.

Branch, a native of Tyrone, Ga., played in 12 games last season. He started at nickel in the absence of Moore during the College Football Playoff matchups against Notre Dame and Ohio State. Branch turned in 27 tackles, seven breakups, and two interceptions. The 6-foot, 190-pounder earned Defensive Player of the Week honors for his efforts versus Mississippi State.

RELATED: Alabama alum not a fan of Jordan Palmer proclaiming Bo Nix will be top pick in 2022 NFL Draft

Justin Woodall, a former Alabama safety, is training Moore and Branch for the coming fall. He was a marquee leader on the Crimson Tide’s 2009 national championship team.

Woodall finished the year with 45 tackles, five breakups, and three interceptions. He had Moore and Branch on the beach performing footwork drills and backpedaling drills in the sand.

Alabama fans want to see the return of a “No Fly Zone” defensive secondary.

Moore and Branch look to restore that type of confidence.