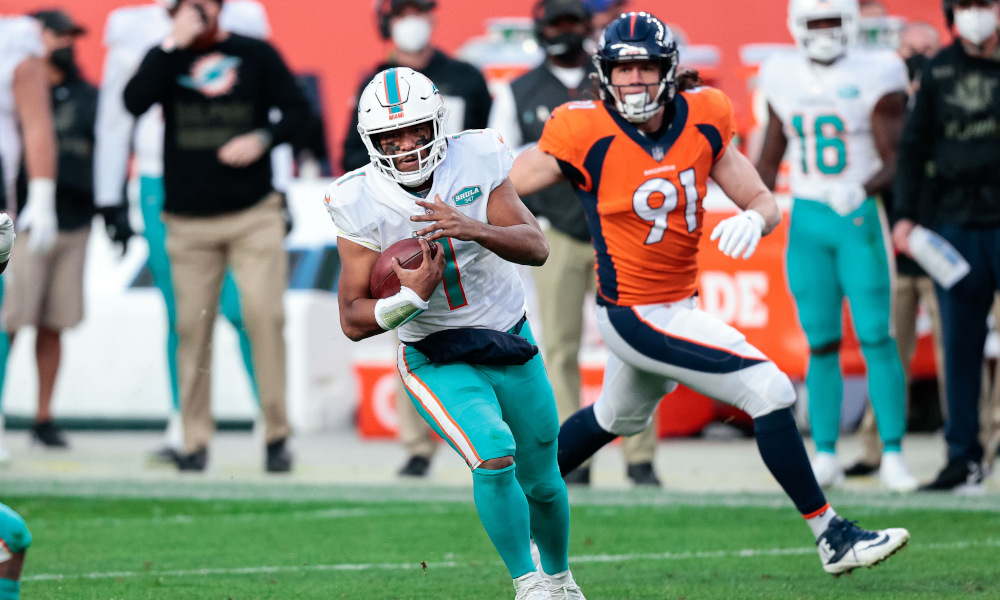 He took his rookie season for what it was worth, but Tua Tagovailoa is carrying more confidence into his second NFL season.

Before pursuing a professional career, he looked the part when he arrived at the University of Alabama in 2017 as a true freshman from Hawaii.

His physique was solid then; however, Tagovailoa is now in the best shape of his life.

He has grown a beard, his arms are sculpted, his legs are thicker, and he has regained complete mobility of his right hip. After sustaining the injury in 2019, he told reporters for the Miami Dolphins that his hip ‘feels 10 times better than it did last year.’

“My hip feels 10 times better than it did last year. The confidence level I feel for myself, I feel very confident coming into my second year after that injury two years ago.”

Tua Tagovailoa: I think my hip feels 10 times better than it did last year pic.twitter.com/h6ac7Q1e3H

When he was not training his body, Tagovailoa was performing footwork, agility, change of direction, and passing drills.

He was excited when the Dolphins drafted his former Alabama teammate, Jaylen Waddle, and he’s been working with his receivers all offseason. Tagovailoa stated to the media that Miami has the firepower on offense to be successful, but it falls on him to get the playmakers the football.

He had some rough patches last year; nevertheless, the No. 5 overall pick from the 2020 NFL Draft is now more comfortable with the playbook. Brian Flores sees the confidence of his quarterback, and the players are bought into Tagovailoa. According to Mike Gesicki, one of Tagovailoa’s top targets at tight end, he is very ‘happy’ to go to work with his signal-caller.

#Dolphins coach Brian Flores on QB Tua Tagovailoa: “He’s definitely more comfortable, but I think that’s normal for anyone in their second year doing something … we’ve seen that from him so far, and hopefully he continues to grow and improve. I see him being more comfortable.”

Dolphins TE Mike Gesicki with a strong defense of his QB Tua Tagovailoa:

“He’s dealt with people saying stupid uneducated stuff that they’re not right about… There’s nothing behind it… I’m happy he’s our QB.”

“The guys in the locker room all believe in him and respect him.”

Tagovailoa has dealt with criticism all offseason.

RELATED: Steve Sarkisian on Tuscaloosa: “Ain’t sh-t else to do but play football and go to class”

People have stated that the Dolphins should have traded him, and there are NFL fans who feel the team should go after Aaron Rodgers. Despite the naysayers, the 2018 Heisman finalist is about to take a huge jump in the fall.