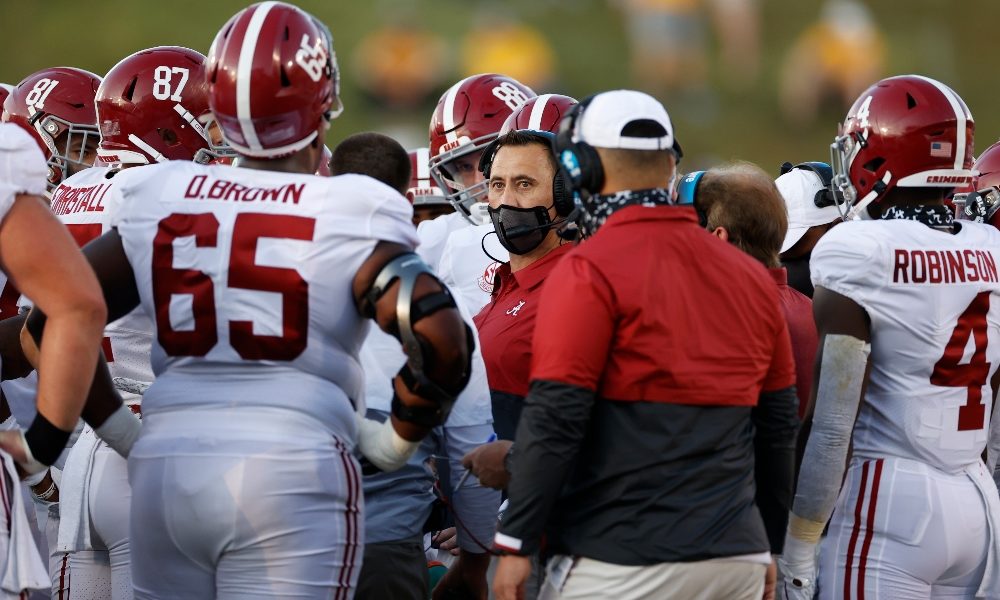 He helped the University of Alabama secure an undefeated national championship in football last season, and produced the highest-scoring offense (48.5 ppg) of the Nick Saban era.

Some fans were saddened to see Steve Sarkisian leave the Crimson Tide for the University of Texas; however, he started his new appointment as head coach of a brand name power with an interesting comment.

According to Sam Khan Jr., a senior writer for The Athletic who covers Texas, Sarkisian participated in a luncheon on Wednesday for the Houston Touchdown Club. Someone asked the former Alabama offensive coordinator about do the players “ever go to class at Alabama?”

Someone in the crowd at Steve Sarkisian’s @HoustonTDClub luncheon asked: “Do they ever go to class at Alabama?”

Sark: Well, yeah. All they have in Tuscaloosa is football and class and there ain’t shit else to do.

His response was humorous yet it rubbed Tide fans the wrong way.

“Well, yeah. All they have in Tuscaloosa is football and class and there ain’t sh-t else to do,” Sarkisian said.

Tuscaloosa is a college town, so there is truth to what he said. Nevertheless, Alabama fans viewed this as offensive – especially with how Coach Saban embraced Sarkisian and brought him into the program at a time when no other school looked at him.

He coached DeVonta Smith to a Heisman Memorial Trophy and produced Unanimous First-Team All-Americans in Smith, Mac Jones, Najee Harris, Alex Leatherwood, and Landon Dickerson. Sarkisian won the Broyles Award (the nation’s top assistant coach) and deserved all the credit he received as a coordinator. Sarkisian and Saban will face each other in a home-and-home series in 2022 and 2023.

The first matchup will be played in Austin (Texas), while the Longhorns will travel to Tuscaloosa in 2023. Saban captured his first national title as the Crimson Tide’s head coach in 2009 and it culminated in defeating the Longhorns, 37-21, in the 2010 BCS national title game.

Fans still appreciate Sarkisian for what he did, but this comment will be stored in their memory banks.