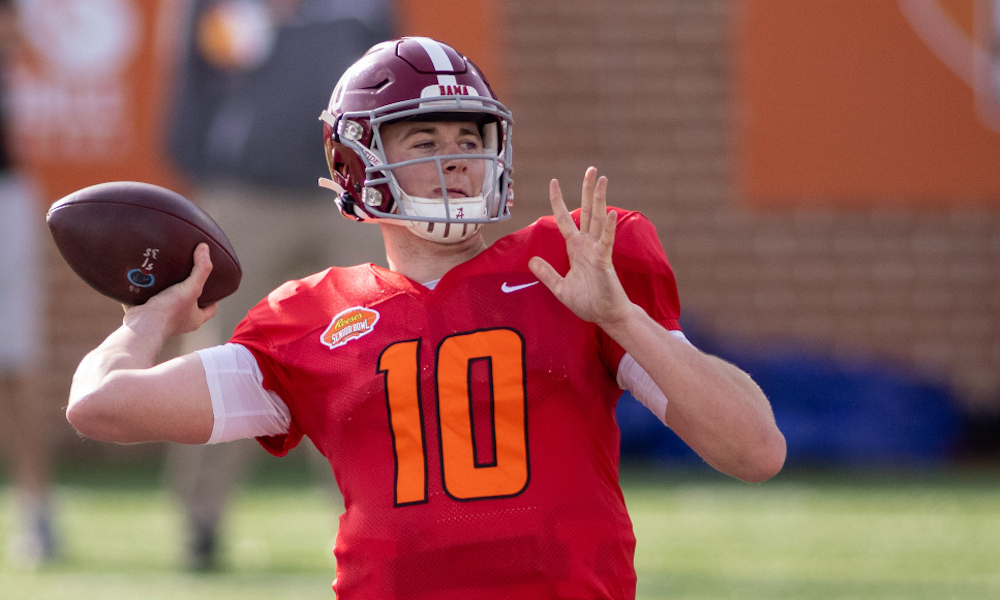 His journey from a three-star recruit to a national championship starting quarterback at the University of Alabama was remarkable, but Mac Jones is trying to outdo himself.

He was selected at No. 15 overall in the NFL Draft by the New England Patriots, and many thought his lack of elite athleticism should not make him worthy of a first-round pick.

RELATED: Brian Flores and Dolphins are “all in” on Tua Tagovailoa entering his second year

Jones had a successful rookie minicamp, and now the Patriots are in organized team activities.

During minicamp, people started talking when a photo of him and Josh McDaniels surfaced on Twitter. New England signed Cam Newton to another one-year deal, but the former Crimson Tide signal-caller is winning over receivers with his leadership.

According to Chris Mason, who covers the Patriots for masslive.com in Massachusetts, Kendrick Bourne is high on the 2020 Heisman finalist.

Kendrick Bourne on Mac Jones: “He has a swag to him that I didn’t know that he had.”

Bourne said the players can feel Jones’ leadership and energy.

“He’s out there confident and that’s what you need in a quarterback and all our players,” Bourne said after Thursday’s OTA. “You’ve gotta have confidence. He’s come in with that and I think that’s going to take him a long way. If you can believe in yourself at all times, for any player, you’ll have success anywhere you are. So I can just see the confidence.”

A lot of criticism has been directed at Jones, but he turned in one of the greatest single-season performances by a quarterback in college football. He was first in the NCAA for completion percentage (77.4), passing yards (4,500), passer rating (203.1), and total quarterback rating (96.1). Jones set Alabama’s single-season record for yards and totaled 41 touchdowns. He was one of the best quarterbacks against the blitz, and he recorded a time of 4.68 seconds in the 40-yard dash at the Crimson Tide’s pro day.

Jones has confidence in the huddle that few signal-callers have.

He is going to make training camp very interesting for the Patriots.