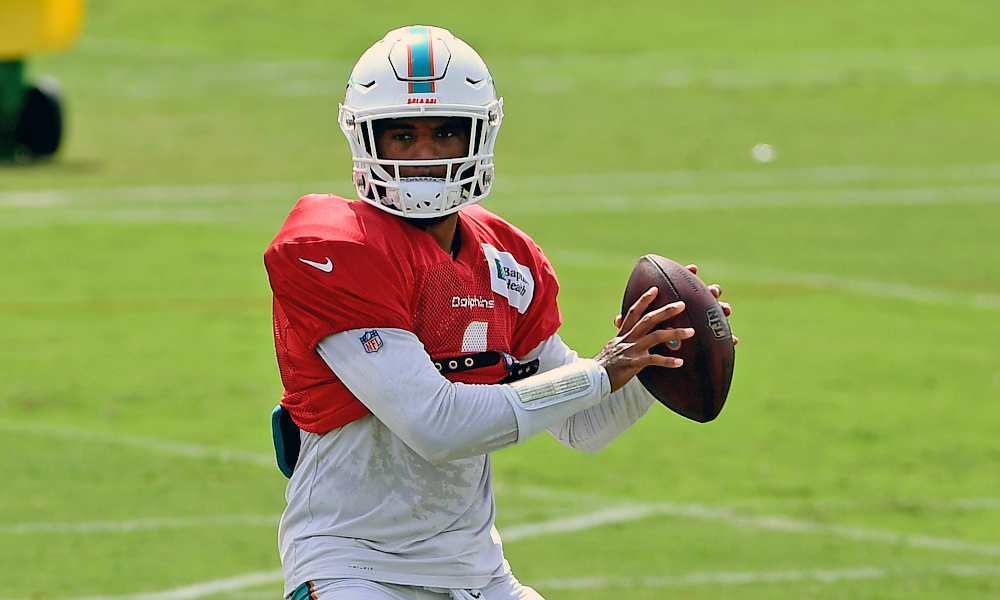 He remains the most iconic figure in South Florida, and fans appreciate his 17 years with the team. After getting selected in the first round (No. 27 overall) of the 1983 NFL Draft, Marino brought fresh air to the quarterback position.

No one orchestrated offense like him. He was a nine-time Pro Bowler, three-time first-team All-Pro, five-time NFL passing yards leader, and three-time leader for passing touchdowns.

Marino is in the Pro Football Hall of Fame and his No. 13 is retired by the Dolphins.

He had an incredible career; however, Marino is more excited about Tua Tagovailoa. The former Alabama signal-caller was drafted at No. 5 overall to the Dolphins in 2020. He endured some struggles as a rookie, but he was still 6-3 as a starter and helped Miami to a 10-6 record.

Tagovailoa is now two years removed from a hip injury in 2019, and the team believes he is prepared for a monster season. In an interview with ESPN’s Cameron Wolfe, Marino said he ‘hopes’ that Tagovailoa can lead Miami to a Super Bowl championship. The lone thing Marino did not do in his career was hoisting the Vince Lombardi Trophy.

“He’s been great. He’s been awesome,” Marino said of Tagovailoa to start his career. “I think it has been tough because of the pandemic and the way everything changed. Not having as much on-field stuff and then Zoom meetings, all of that stuff takes time. He’s a great kid. He works his butt off. He has all the talent in the world, and now it’s about him developing relationships with the other players. It’s tough because he did not have OTAs last year. He did not have summer camps and the chance to play in exhibition games, all of those things were delayed. He works his butt off. I am excited about him and our future as a team.”

Marino has served as an executive for the Dolphins since 2014. He told Wolfe the importance of OTAs is for a quarterback to be comfortable with the players it practices with every day. Tagovailoa enters his second season in the fall and is more confident.

“OTAs are all about timing,” Marino said. “He [Tagovailoa] played a lot last year. When he played, we won games and we almost got in the playoffs. All those were positives, and we try to build on the positives. He is going to be there for us when we need him.”

Tagovailoa has been training since the 2020 season ended. Whether it has been bulking his body, performing movement and agility drills with his hip, or throwing to wide receivers, he has found ways to put himself in the right position to succeed.

Marino is behind the native Hawaiian, and the rest of the league needs to be ready.