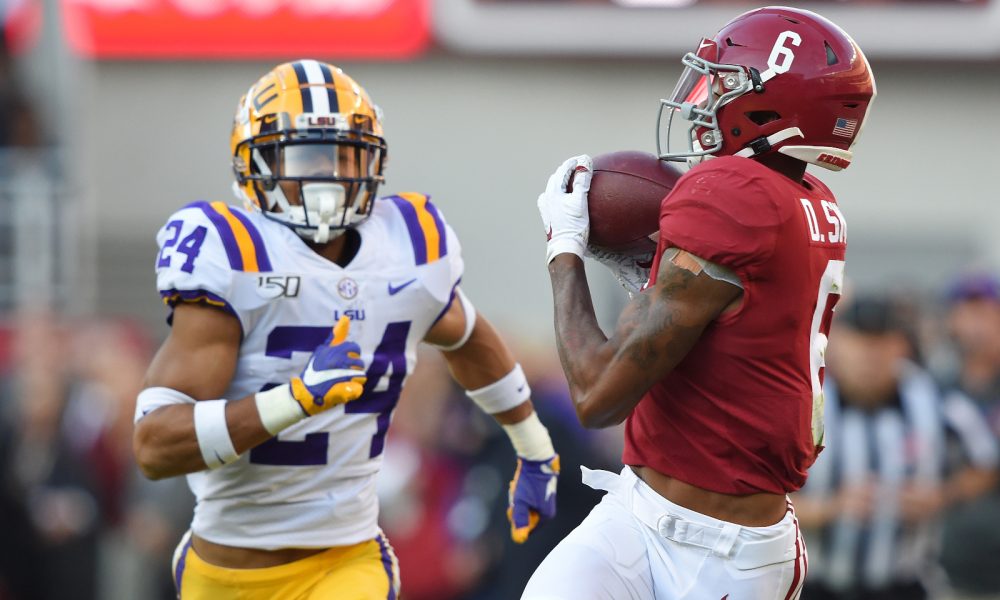 He is regarded as one of the best cornerbacks for the 2022 NFL Draft, but Derek Stingley of Louisiana State University endured rough moments versus the University of Alabama.

During his freshman and sophomore seasons, DeVonta Smith burned the talented defender.

RELATED: Dan Mullen on Alabama taking 5-star players from Florida: ‘Maybe I’d rate people differently on who we go after’

Smith, a native of Amite, La., torched Stingley for 213 receiving yards and two touchdowns on seven catches in 2019. He put on a better display against the Tigers in 2020 with 231 yards and three scores on eight catches at Tiger Stadium.

In two years, Stingley watched the 2020 Heisman Trophy winner embarrass him in totaling 444 yards receiving and five touchdowns on 15 receptions.

The 6-foot-1, 170-pounder is now in the National Football League.

Stingley no longer has to worry about the “Slim Reaper;” however, he admits to learning from Smith. Before he starts his junior year, the veteran spoke to reporters at SEC Football Media Days. Stingley did not record an interception last year, but he totaled five pass breakups. While he is focused on his duties, Stingley said he looks forward to seeing what Smith does in the NFL.

“He’s a great player,” Stingley said of Smith. “He taught me a lot.”

Stingley’s task will shift from Smith to John Metchie III. He had 55 catches for 916 yards and six scores in 2020. Metchie caught four passes for 58 yards in Alabama’s 55-17 win over LSU.

The 6-foot, 195-pounder is a preseason candidate for the Maxwell Award, which goes to the player of the year in college football. He may also be on the Fred Biletnikoff Award watch list.

It will be interesting to see if Metchie handles Stingley in the fall.