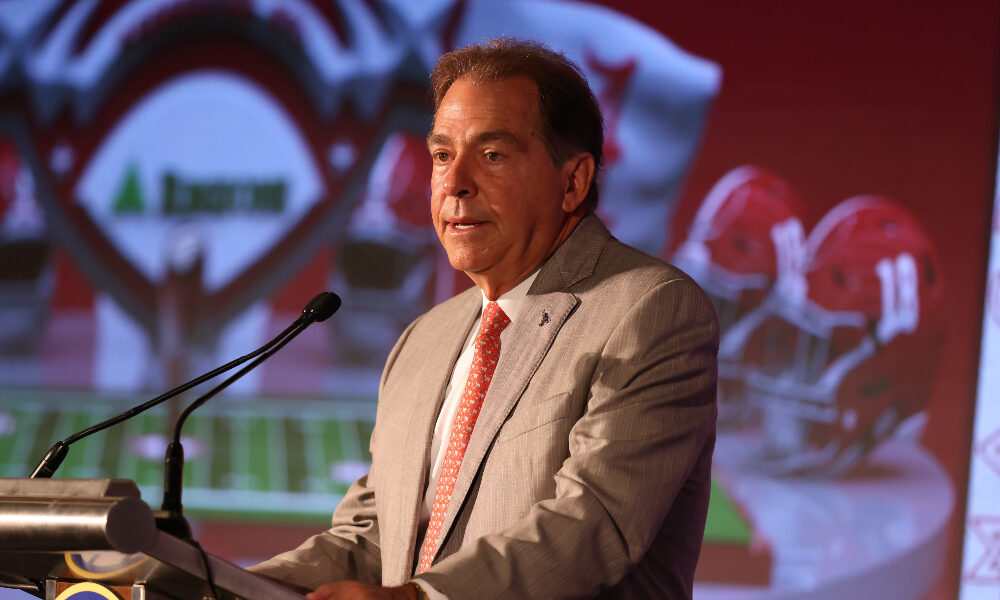 The discussion of the COVID-19 vaccine has already been a big topic as the third day of SEC Media Days has begun. Head coaches have been hesitant to disclose any stats or updates on the number of players who have received the vaccine, but Alabama head coach Nick Saban pulled back the curtain just a bit.

When asked about the vaccine, Saban shared that a majority of the Crimson Tide have already received their shots and even specified that close to 90 percent of the team is vaccinated.

The seven-time national champion stressed that the decision to get vaccinated is a personal one and that players have many different factors to consider.

“So every player has a personal decision to make to evaluate the risk of COVID relative to vaccine, and then they have a competitive decision to make on how it impacts their ability to play in games, because with the vaccine you probably have a better chance. Without it, you have a lesser chance that something could happen, a bigger chance that something could happen that may keep you from being on the field, which doesn’t enhance your personal development.

“Then how does it affect the team if you bring it to the team? So these are choices and decisions that every player has to make. Our approach has been I think we’ve had three medical doctors sort of give lectures to our team about the pros and cons of the whole COVID circumstance, the vaccine circumstance, so that they can make intelligent decisions about what they do.”

Despite the personal decisions, SEC Commissioner Greg Sankey said on Monday that the conference’s vaccination numbers need to improve if teams want to go through the season without disruption.

“Right now 43 percent of our football teams, that’s 6 of 14, have reaches the 80 percent threshold in roster vaccination,” Sankey said in his opening statements on Monday. “That number needs to grow and grow rapidly.”

Sankey also said that teams may need to be prepared to forfeit games should teams not reach the player minimum requirements.

“We still have roster minimums that exist, just like last year,” Sankey said. “What I’ve identified for consideration among our membership is we remove those roster minimums and you’re expected to play as scheduled. That means you team needs to be healthy to compete, and if not, that game won’t be rescheduled. And thus, to dispose of the game, the ‘forfeit’ word comes up at this point. That’s not a policy, and what you see are the bookends now for decision making.”

Alabama was the second team to share it is one of the six teams above the 80 percent threshold with Georgia head coach Kirby Smart sharing his team has met that requirement during the Bulldogs media days on Tuesday.