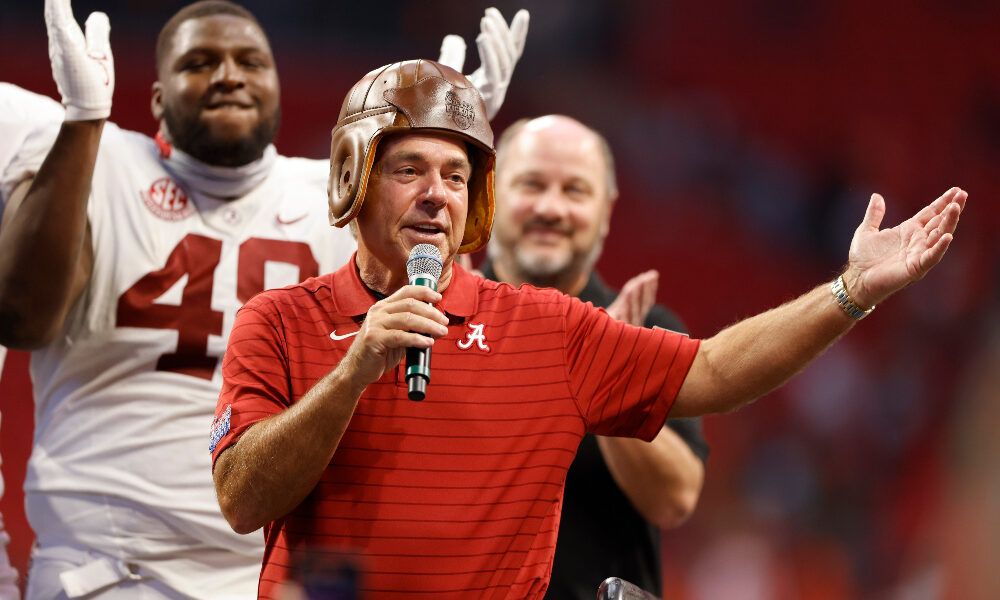 Touchdown Alabama will be releasing a new weekly series of stories following each game played from the Crimson Tide. Nick Saban has time and time again used the term “rat poison” when speaking about forms of media he doesn’t want his players to listen to.

At its simplest form, Saban doesn’t just want his players only being subject to positive news making at the off chance that it affects their play.

Luckily for Saban, the headline will give it away every week. But that doesn’t mean the fans can’t get their dose of rat poison after each outcome.

Basically, after each game we will look at three positive takeaways from Alabama’s win or loss from the previous Saturday and one negative in case Saban is reading.

Without further ado, here’s what was found from Alabama’s 44-13 victory over Miami.

Bryce Young looks the part, and then some

Bryce Young had some big shoes to fill, following former quarterback Mac Jones’ historic season for Alabama in 2020. But Saturday’s game proved that the Crimson Tide are in good hands moving forward at quarterback.

Young set Alabama records for a first time starter with 344 passing yards and four touchdowns in his debut.

But it wasn’t just the big numbers and long touchdowns that’ll be shown on all of the highlights online. It’s the poise and understanding he displayed under new offensive coordinator Bill O’Brien.

Even when the pocket collapsed, Young kept a number of plays alive and was able to pick up first downs with superior vision and off balance throws. One of the big differences in the game was Alabama’s ability to convert on third down and keep drives alive as they went 10/16 compared to Miami’s 6/14.

Young also was not afraid of the check down or simply throwing it away to live another down. As much as Alabama’s offensive has changed over the years, Saban still preaches the importance of ball control and game management which are areas Young excelled throughout.

This is Alabama’s best defense since 2016

It’s been quite a few years since an Alabama defense could be described as “dominant” but the 2021 unit is shaping up to be just that.

After what could be considered a solid showing from Pete Golding’s side of the football in 2020 where it led the SEC in average points allowed at roughly 20. On Saturday the Crimson Tide allowed just 13 points against a Miami offense that averaged 34 last season and returned 10 starters from that offense.

Alabama didn’t give up an inch on the ground or through the air as it allowed a modest 266 yards of total offense to the Hurricanes.

With a total of 9 starters returning from a year ago, along with the addition of the one of the top linebackers in the SEC in Henry To’oto’o, Alabama has restocked and rejuvenated its identity as a defensive powerhouse.

What’s even more impressive is that there will likely be even more dominant performances to come. Players like Will Anderson, Christian Harris, Malachi Moore and Josh Jobe are now cornerstones of the defense and emerging as elite players in college football.

Not to mention Alabama’s depth on the defensive line gives it an edge over opposing offensive lines, for the Crimson Tide can go seven deep when at full strength.

In conference play this year, Alabama will go up against six first year starting quarterbacks throughout the rest of the regular season.

Based off what this group did against an experienced player like D’Eriq King, it’ll be foaming at the mouth when those games come around.

Alabama has struck gold with Jameson Williams, and Henry To’oto’o

Transfers can sometimes be hit or miss for teams, but Alabama has not only struck gold with one incoming transfer, but two.

Wide receiver Jameson Williams and linebacker Henry To’oto’o, were two players with a lot of excitement around leading into the season. And just one game in it’s easy to see why the hype was warranted.

Saban is always looking for a change of pace type player on offense whether its been Calvin Ridley, Kenyan Drake or most recently Jaylen Waddle, but now Williams is the speedster that can take the top off the defense.

There was no better example of what Williams is capable of than when he took pass from Young 94 yards to the end-zone, as he simply out ran the Hurricanes’ defense. Williams is a threat whenever he steps onto the field and his 126 yard performance proves just that.
On the flip side, To’oto’o showed he is an immediate leader on defense just a few months into his time in Tuscaloosa. Operating as the team’s MIKE linebacker, To’oto’o already has a strong grasp on the defense he will be calling this season.

There doesn’t appear to be much thinking going on when the ball is snapped for the former Volunteer, it’s just reaction and instinct.

After an impressive first outing, the two will only get more comfortable with their roles as the season progresses.

Losing Christopher Allen for the year will be a big blow

Unfortunately for Alabama, it didn’t come out of its game against the Hurricanes completely unscathed. Outside linebacker Christopher Allen fractured his foot in the second quarter which will require surgery.

Saban said on Monday the senior will likely miss the remainder of the season and will leave a sizable hole on the Crimson Tide’s defense.

In 2020, Allen was a major part of the team’s pass rush recording a total of 33 tackles and 5.0 sacks. This year was supposed to be a breakout season for the Baton Rouge, LA, native and in his short amount of playing time he made a major impact.

Before he left the game, Allen had three tackles, one sack and one tackle for loss. He and Will Anderson were essentially racing to see who could get to the quarterback first, and now the Crimson Tide will need to find a way to replace that production.

Sophomore Drew Sanders will likely be the one to step in, but achieving the heights of where Allen was headed will likely not happen.