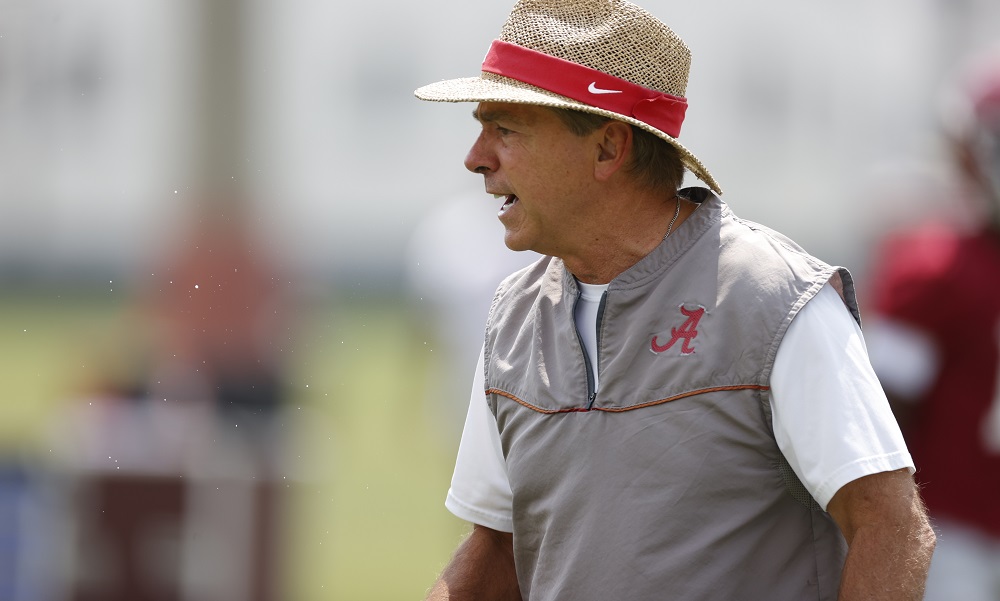 After a full review of the game against Miami and three practices under the team’s belt heading into Saturday’s game against Mercer, the negatives currently outweigh the positives. At least in Saban’s mind.

This culminated in Saban unleashing another one of his famous rants to the media, verbally and visibly displaying his frustration.

“We basically played one half of one game,” Saban said. “Aight, we went ahead twenty seven, nothing, in the game and then it was basically seventeen to sixteen after that with two stops inside the five yard line. So we didn’t maintain our intensity in the game, so we were effected by the scoreboard, so we haven’t proved that we can play for sixty minutes.

“Then we come out on Monday and — really not ready to practice. I guess becasue of respect we have for the opponent. I don’t really know all that. Or maybe it’s what they read on social media, or in the media or whatever, after one half of a game this season. Then it was hot yesterday. So we got every external factor in the world that is affecting our ability to maintain intensity and play the way we need to play and practice the way we need to practice to improve.

“We got the scoreboard that affects us. Who we’re playing affects us. The heat affects us. The media, and what you guys write everyday, affects us. So, you know, to me — we gotta prove that we can play and maintain intensity for sixty minutes in the game. Execute, do our job, play hard, finish games, finish plays, do things the way we’re supposed to do it.”

A quick glance at the stat sheet against the Crimson Tide’s victory over the Hurricanes last Saturday wouldn’t encapsulate the point Saban is trying to make. The Alabama offense did take a step back offensively as it posted 80 less yards in the second half along with just the 17 points Saban alluded to. It’s also the half where it had five of it’s eight penalties called against it.

Defensively, Alabama surrendered 142 yards in the third quarter along with 10 points and the goal line stands Saban mentioned.

Saban was later asked about how the leaders on the team would respond following the stretch of unsatisfactory practices. The head coach explained he’s still looking to see how they respond.

“Well we’ll see,” Saban said. “You know, I mean that’s what I wanna see. I wanna see, do we have leadership? Do we get people to respond? Do people care enough to understand what we have to do to maintain our intensity for sixty minutes in the game? To improve as a team? To do the things that we need to do to improve as a team? To have the mindset that we need to have?

“So I think we’ve got some guys that have got it backwards. We’re trying to get it fixed.”

Alabama will kickoff against Mercer on Saturday Sept. 11, at 3 pm, CT, inside Bryant-Denny Stadium.