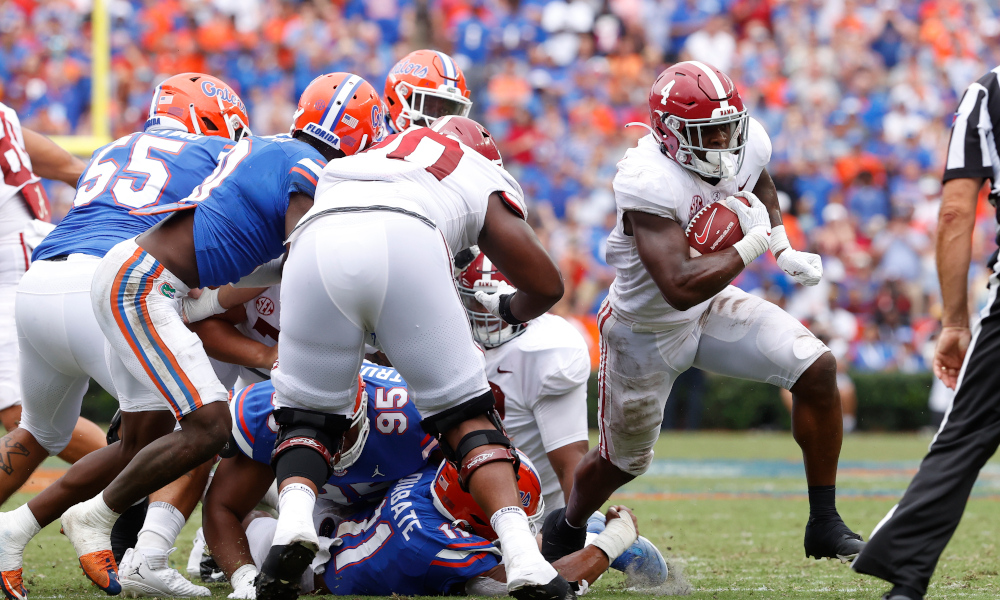 After the smoke cleared and fans left Ben Hill Griffin Stadium, one thought consumed the minds of Alabama fans.

Why did Bill O’Brien not stick with the running game? Supporters of the Crimson Tide and media pundits alike kept wrecking their brains with the question. When it held a 21-3 lead over Florida, Alabama’s offensive line was creating opportunities for its running backs. Brian Robinson had a 23-yard run on the Tide’s first scoring drive, and it ended with a 7-yard touchdown pass from Bryce Young to Jase McClellan. Robinson totaled 75 yards rushing on 14 carries, including a 3-yard touchdown to give Alabama a 28-16 lead. He averaged 5.4 yards per carry and made it difficult for the Gator defenders to tackle him in space.

O’Brien had a balance in the first quarter; however, he abandoned the backs after that.

The Tide wanted to generate more offense with Young, but Florida’s defense was stout.

Young almost had two interceptions as the timing between him and Alabama’s wide receivers was off. If the Tide continued its business on the ground, it probably takes a 25-point lead (28-3) into halftime and silences the crowd at “The Swamp.” Instead, it forced passes from Young and allowed Florida back into the game.

Dan Mullen, unlike O’Brien, trusted his backs. The Gators had a balance attacked and nearly stunned the Tide.

Florida totaled 245 yards rushing and four touchdowns on 43 carries. Malik Davis and Nay’Quan Wright gashed Alabama’s defensive front while Emory Jones had 77 yards rushing with a score on 19 carries. Jones had the Tide off-balance in the option game and quarterback runs. The part of the matchup that could have worn down Florida’s defense ended up affecting Alabama.

With O’Brien in the booth, he does not get chewed out by Coach Saban. A conversation will happen between these two during coaches’ meetings, team meetings, and practice. Fans want to see a balanced group, and Saban does too. Alabama was in a position to run the Gators off the field with its rotation in the backfield, but the scheme did not favor the run game.

Hopefully, we will see more opportunities for Robinson and others as we continue the season.