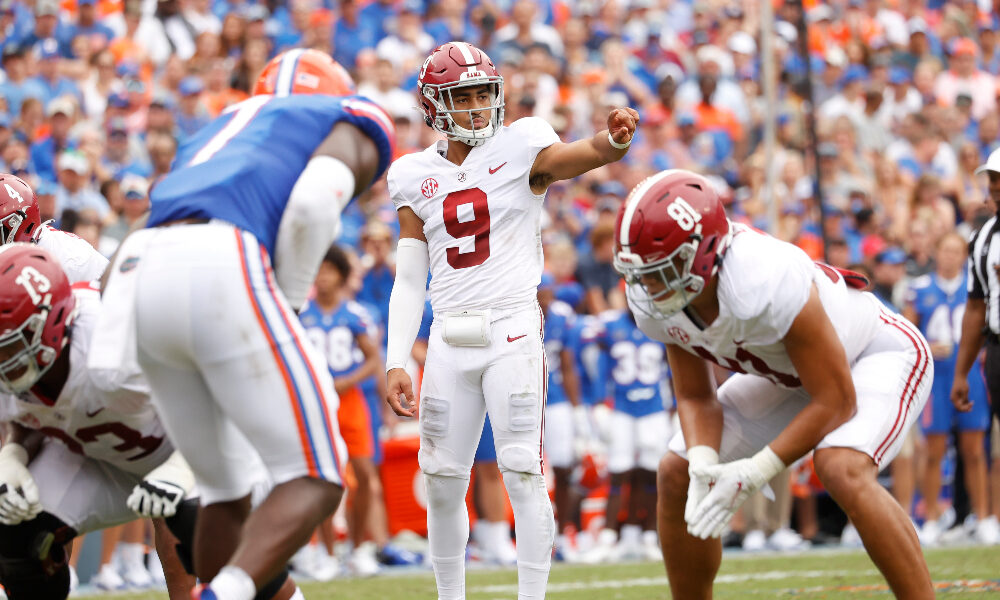 For the first road start of Bryce Young’s Alabama career, it sure was memorable one. In the face of over 90,000 strong at Ben Hill Stadium, the Florida Gators gave everything the Crimson Tide could handle and then some.

Outside of three straight scoring drives in the first quarter, points and yards were difficult to come by for Young and the offense who had to earn every inch of the team’s 31-29 victory last Saturday.

With deafening noise coming from the crowd, Alabama shot itself in the foot on multiple occasions with presnap penalties on offense but still managed to keep drives alive while taking care of the football.

“I thought Bryce did a really good job of managing the crowd noise,” head coach Nick Saban said following the game. “There were some times where it gave us issues, but it was really more of a snap-count issue than it was his doing. The center had a tough time hearing a couple times, and we snapped the ball late and got some penalties.”

Accompanying the crowd noise from “The Swamp” was intense humidity which lingered throughout the game and played a factor up front for Alabama which made things even more difficult.

“Crazy atmosphere. Those fans were really loud,” Young said. “We knew it was gonna be a hostile environment coming in, and it lived up to it for sure. The fans were super loud. There was a lot we had to deal with. This was a really, really good team. We just played in a really, really tough environment. It was tough, but I’m super proud of us as a unit for overcoming it.”

In his third start, Young completed 22-of-35 passes for 233 yards and three touchdowns going to three separate players. It was far from pretty, but Saban still thought the unit as a whole did a solid job moving the football throughout the game and gave credit to Young for keeping his composure.

“I think Bryce did a really good job,” Saban said. “I think he was very composed. It was a difficult circumstance and situation to play in. We clapped some, we went on silent some. But I thought he manged the game really well, made some really, really good decisions for the most part. We did a nice job on third down, which was really important in the game. He made some good reads, guys made some good catches.”

Alabama finished the game converting on 7-of-13 third down attempts offensively while averaging 5.2 yards per play on the day.

“I thought offensively, other than those three three-and-outs in the second quarter, we did a good job of moving the football,” Saban said. “We didn’t always score a touchdown, but I think when you control the tempo of the game on offense and even when you move the ball and control the clock, keep the defense off the field, those are important things when you’re playing good teams.”

Adding to the hardships on offense, were play clock difficulties at the end of the fourth quarter. Young had to lead the offense without a working play clock while the Crimson Tide led the Gators by just two points. With the game on the line, Alabama was able to shave the clock down to 10 seconds before James Burnip’s punt which sealed the team’s victory.

The circumstances were certainly unusual, but Young didn’t let the oddity affect the team.

“That’s something we can’t control,” Young said. “That’s an external factor. That was something that we just had to manage. We knew the situation. They were keeping the time on the field, the clock wasn’t working. That was just another piece of adversity we had to overcome.”