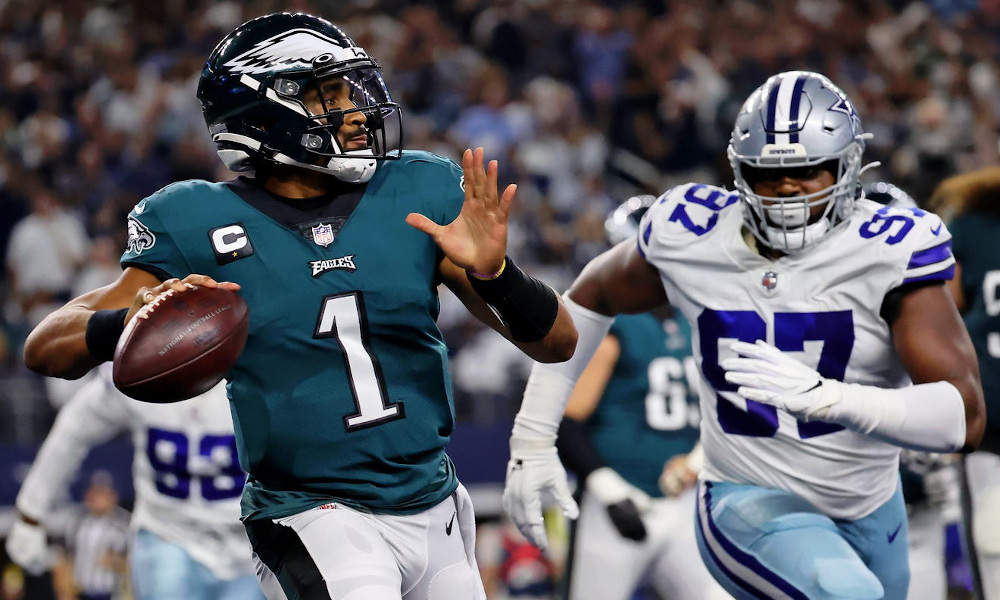 We can now add entertaining quotes to Jalen Hurts’ list of skills.

He and the Philadelphia Eagles suffered a 20-point loss on Monday Night Football to the Dallas Cowboys.

RELATED: Jordan Battle had a confidential conversation with Nick Saban after his viral ‘deez’ jokes

Hurts was intercepted twice, including once by his former Alabama teammate.

Trevon Diggs returned the pick for a 59-yard touchdown, becoming the first Cowboy since Byron Jones in 2017 versus Washington to return an interception for a score.

Despite not having his best game, the second-year quarterback owned up to the loss. Hurts took responsibility for the Eagles dropping a divisional game, and his reasoning for moving forward was entertaining. During his postgame presser, Hurts compared the loss to ‘taking a deuce.’ The local media had a good laugh with it, but the native Texan is moving forward.

Jalen Hurts with an all-time quote after the Eagles’ Week 3 loss 😂😂😂 pic.twitter.com/L9MnjsQlRs

He had a chance to get a victory, but it did not happen.

Hurts totaled 326 passing yards with two touchdowns; however, the rent was not paid.

The road does not get easier, as Philadelphia will be home Sunday to face Patrick Mahomes and the Kansas City Chiefs. Hopefully, the home crowd will push Hurts and the Eagles to its second win of the season.