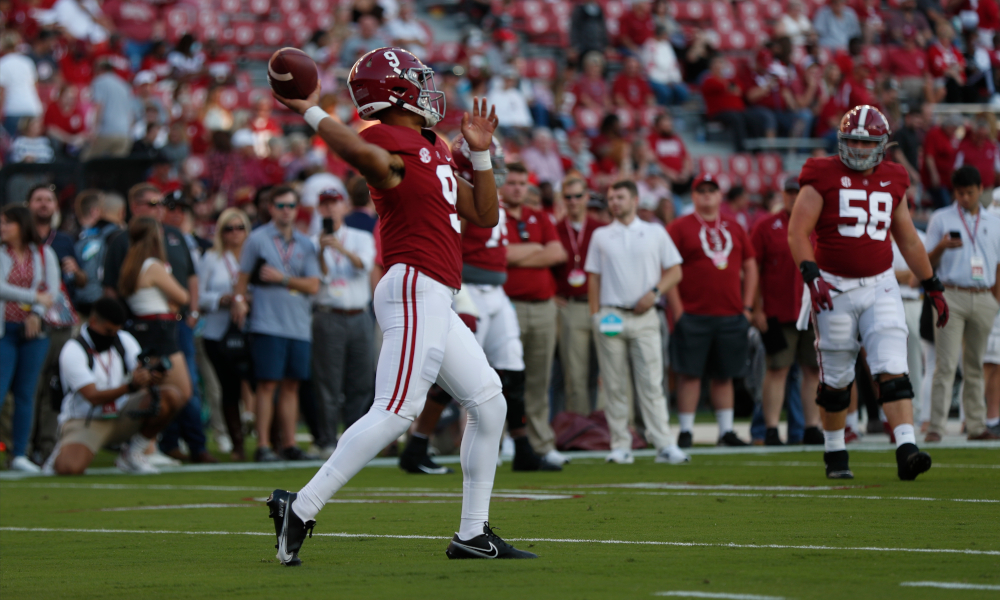 Alabama football and rap recording artist Young Jeezy have something in common.

Throughout his music career, Jeezy had one magical quality: he was believable.

RELATED: Previewing impactful players for Tide ahead of Mississippi game

If one looked into his eyes and observed his life, he represented everything he said in his songs.

Nick Saban has brought the same quality to the Crimson Tide. People believe Alabama is the best program in college football. The constant success of Coach Saban makes it expected for the Tide to win national championships, recruiting battles, and have the most players in the National Football League. This season, Alabama has a quarterback that possesses a quality everyone seems to have gotten behind.

Bryce Young wanted the demands of playing football at a major school. As a five-star, he could have taken his talents anywhere during the 2020 recruiting cycle. He liked what Saban and Steve Sarkisian were doing in Tuscaloosa, so Young gave Saban his most highly-rated quarterback signee. After sitting behind Mac Jones, the sophomore has created attention as a starter. He opened the year with four touchdowns against Miami, kept his poise in a close game with Florida, and tied a single-game school record for touchdowns (five) versus Southern Mississippi. Young is not the tallest quarterback; nevertheless, nothing seems to shake his confidence. He is rooted in faith, family, and football, so it comes naturally to believe what he does.

Young is making nearly $1 million in NIL deals; however, one would not know by looking at him.

When he speaks, it is quiet confidence.

His performance in games is louder. It is his opportunity to show people who he is. Alabama does not have many second-year players on the leadership council, but Young is one of them.

He has impressed reporters with how polished he is during interviews. Most importantly, his actions won over his teammates and coaches.

Young has that believable quality. On Wednesday, Saban credited Young’s accountability as a reason for the team trusting him.

“I think anybody can trust anybody because they respect what they do,” Saban said. “They are accountable for what they do. They do what they are supposed to do as a person, student, or player on the field. And that is how you develop respect for someone as a competitor and player. When they do that over time, you develop trust that the guy is going to do what he’s supposed to do.”

He is watching a young player go through the University of Alabama like a veteran. Saban is observing someone that has his team’s best interest at heart.

“You can go down a list of guys on our team, and they probably would never tell you if you asked them, but they all know who they can trust,” Saban said. “They probably know some guys they cannot trust, and it is because those guys have not been accountable to do it the right way consistently. Then, the result is kind of the reckoning when you go perform. I think that is how anybody gains trust, that you do things the right way over time and people find out you can believe what this guy says.”

When he came off the field with seconds left in the College Football Playoff title game against Ohio State, Mac Jones handed Young the ball.

It was a symbolic moment Jones knew he could trust the California native with the team.

Young has developed a respect for Bill O’Brien, and the two are continuing the evolution of Alabama’s offense. Regardless of legendary names, the Crimson Tide has yet to have a quarterback win the Heisman Trophy.

Young is set to change that narrative.