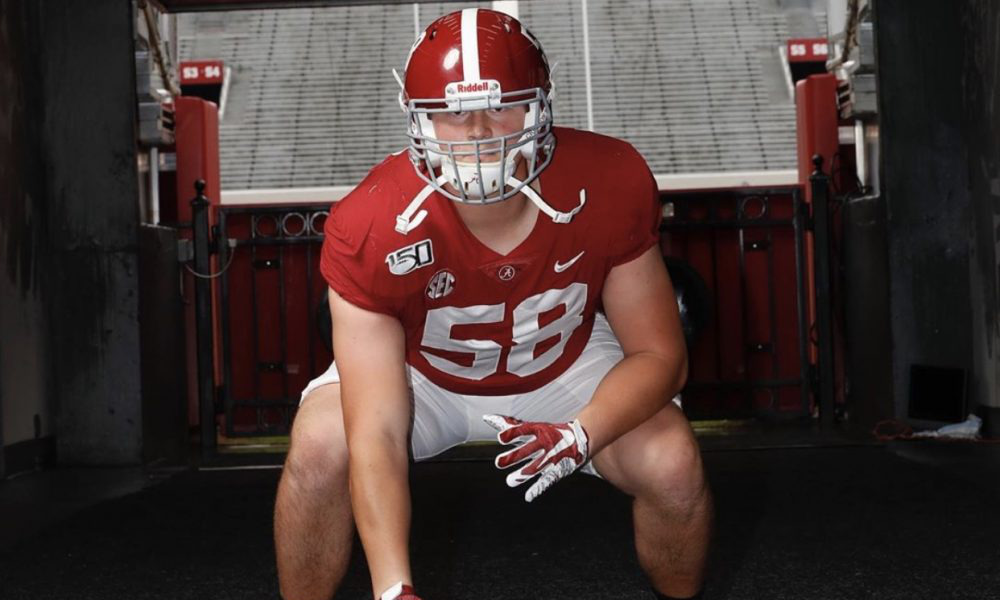 Alabama football has a sophomore ready at center if Darrian Dalcourt (ankle) is out for New Mexico State.

Dalcourt, a junior, suffered an injury against LSU and is day-to-day. Coach Nick Saban cannot make a call on his status, but he hopes the Maryland native does more today in practice. If he can, Saban told reporters on Wednesday that Dalcourt will play.

If not, Seth McLaughlin is next up at the position. Chris Owens has worked at center, but Saban likes the intangibles of the second-year player. According to Touchdown Alabama Magazine’s independent recruiting rankings, McLaughlin was a three-star in the 2020 signing class. He was one of three offensive linemen, joining Javion Cohen and Damieon George.  An alumnus of Buford (Ga.) High School, McLaughlin was a dominant lineman.

He played all five positions for the Wolves.

He helped the team to a state championship in 2019, but his senior year was impressive.

McLaughlin paced Buford to 467 total points and 3,400 yards rushing. He graded out at 91 percent on his assignments while allowing one sack and two quarterback hurries. McLaughlin saw 10 snaps for Alabama versus Kentucky in 2020 but has played in five matchups this year.

He logged 23 snaps combined against Miami, Mercer, Southern Mississippi, Mississippi State, and Tennessee. Justin Smith, the lead scouting and recruiting analyst for TDA, has covered Buford High School a lot. He said McLaughlin’s versatility stood out the most to him.

“He was consistent at center throughout high school,” Smith said of McLaughlin.

RELATED: Bryce Young and Will Anderson named semifinalists for Walter Camp Player of the Year Award

“He was not the biggest guy, but he is still physical when he needs to be. McLaughlin is a technically sound center. He does everything the right way. He can pull, set up counter blocks, and his intelligence is strong. He did everything for Buford.”

The 6-foot-4, 295-pounder could be seeing an opportunity on Saturday. Saban highlighted McLaughlin in Wednesday’s presser.

“He has made a lot of improvement,” Saban said of McLaughlin. “He plays well, and he’s smart. He’s competitive and plays with the intangibles we look for at the position. He is tough.”

Saban knows the center position must improve for a championship run. Is McLaughlin the answer?

We will see soon enough.