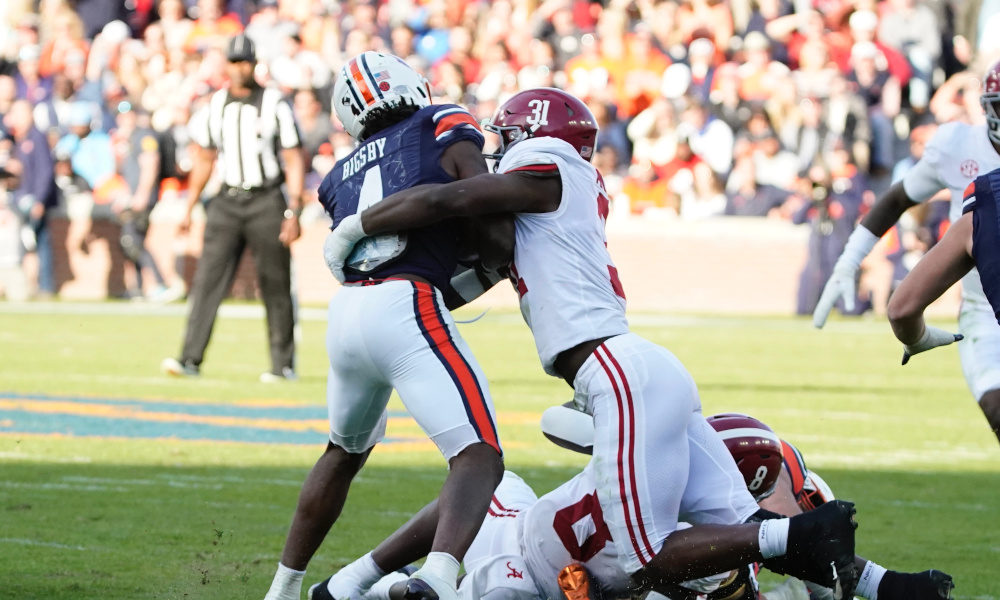 Will Anderson is one of the biggest storylines entering the SEC Championship Game.

Bryce Young, a sophomore quarterback, represents Alabama football as the frontrunner for the Heisman Memorial Trophy.

RELATED: Alabama holds at No. 3 in the College Football Playoff rankings going into the SEC Championship

Young had a Heisman moment versus Auburn, but Anderson has been one of the most productive defensive players in college football.

He won SEC Defensive Player of the Week five times. He also leads the nation in tackles for loss (29.5) and sacks (14.5). A native of Hampton, Ga., Anderson grew up a Bulldogs fan.

He chose Alabama because of the mentality of Nick Saban, but this is a homecoming game for the former five-star. Kirby Smart praised him during interviews, but Saturday’s matchup at Mercedes-Benz Stadium is huge for the sophomore linebacker.

On Monday, Anderson spoke about the reason why he signed with the Crimson Tide over the Bulldogs.

“I did grow up a Georgia fan,” he said. “I got recruited by them a little bit. I didn’t get too much attention from them, but it worked out well.”

One of the fiercest edge rushers in the 2020 recruiting cycle did not get much attention from Georgia.

People have talked up Jordan Davis, Nakobe Dean, Nolan Smith, and other players from Georgia’s defense all season. Alabama has turned it around since a defeat to Texas A&M, and Anderson has been the reason. He needs four sacks to have sole possession of second place all-time in school history for a single season. Derrick Thomas’ mark of 18 (1987) is still second.

The 6-foot-4, 243-pounder will be coming after Stetson Bennett and J.T. Daniels.

Alabama players have nominated Anderson for the Heisman conversion, but Coach Saban endorsed him during a presser.

“He has been one of the most productive players in college football as a defensive player,” Saban said of Anderson. “He’s done everything we have asked him to do. He is a consistent player. He is very disciplined in terms of doing his job. He does it with tremendous effort and toughness. So, I don’t know if there are a lot of good football players on both sides of the ball, but he’s done as much for our team as anybody ever has. I don’t know how that equates into recognition, but he’s done as much for us as anyone could ever hope for.”

Saban made a speech similar to this on DeVonta Smith in 2020. The talented wide receiver became the Crimson Tide’s third Heisman winner in the Saban era.

He set a new single-season receiving record for yards (1,856) and touchdowns (23) while catching 117 passes.

Anderson eyes a trip to New York City, and it starts by handling the marquee team in his home state.