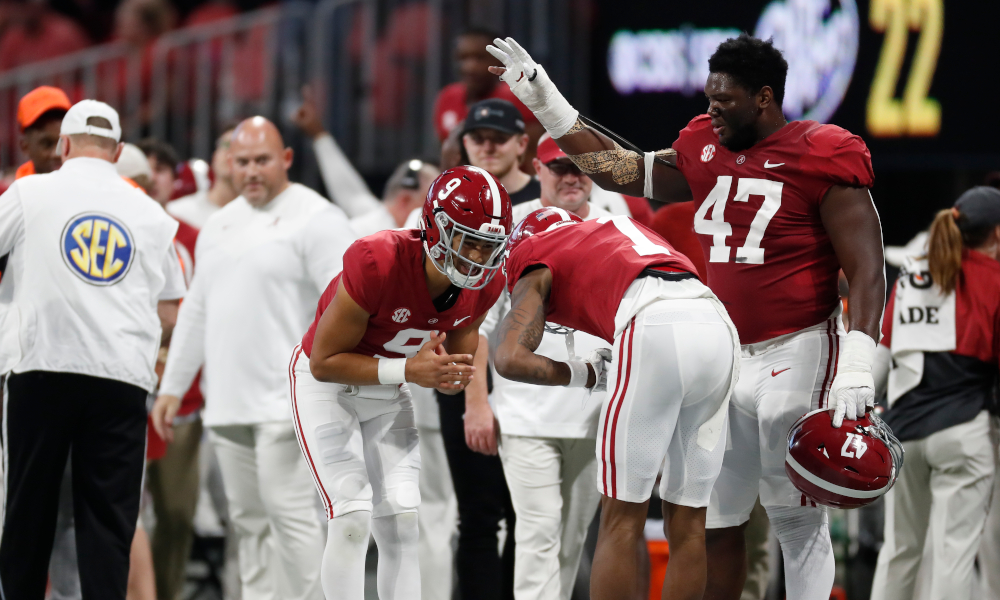 Alabama fans woke up Sunday morning rejoicing over what they saw at Mercedes-Benz Stadium.

Few expected the Crimson Tide to defeat Georgia in the SEC Championship Game, but Nick Saban’s group silenced national media, oddsmakers, and naysayers. Alabama earned a 41-24 victory over the Bulldogs. The Tide secured back-to-back conference championships and are in the College Football Playoff for the seventh time since 2014.

RELATED: Alabama secures No. 1 seed in the College Football Playoff

Saban captured his fourth win over Kirby Smart and seventh against Georgia since 2008.

Alabama executed in all phases, and grades are highlighted below from the Crimson Tide’s statement victory.

Alabama blasted the Bulldogs for 41 points and 536 yards. After hearing about Georgia’s defensive front, the Crimson Tide’s offensive line had a performance for the ages. The offensive front did not allow a sack of Bryce Young for the first time all season.

Alabama’s protection guided the sophomore quarterback to put a final stamp on his Heisman Trophy campaign in Atlanta.

It did not run the football like it wanted to, but the Tide had enough success to drain the clock in regulation.

Seth McLaughlin, a sophomore, earned the start at center, and he excelled against Jordan Davis. He kept one of the nation’s best defensive players away from Young. Chris Owens handled his business at right tackle, and both guards – Emil Ekiyor and Javion Cohen – played well. Coach Saban challenged the offensive line all week, and it responded with dominance in pass protection.

He notched his seventh 100-yard outing and fourth game of 150+ yards. Williams exploded against the Bulldogs’ defensive secondary for 184 yards (game-high) and two touchdowns on seven receptions. He started the offense for the Tide with a 67-yard touchdown catch in the second quarter. The 6-foot-2, 189-pounder averaged 26.3 yards per catch versus Georgia.

Alabama got contributions from John Metchie (97 yards, one touchdown), Slade Bolden, Traeshon Holden, Jahleel Billingsley, Cameron Latu, and Brian Robinson as receivers. Georgia allowed 61 conversions on 190 attempts on third down (32.1 percent), but the Crimson Tide got first downs on half (7-of-14) of its third-down tries. Alabama torched the Bulldogs for an SEC-title record of 24 points in the second quarter.

Despite not having an excellent rushing attack, Alabama’s passing game and the offensive line kept Georgia off balance.

Alabama fans witnessed a “Make him quit” defensive performance from the Crimson Tide against Georgia.

Some knew the Tide could dominate the Bulldogs, and Alabama frustrated Stetson Bennett all game long.

No running back for Georgia totaled 40+ yards rushing versus the Tide. Regardless of allowing three touchdowns to Bennett, Alabama’s secondary picked him off twice – including a pick-six by strong safety Jordan Battle in the fourth quarter.

DeMarcco Hellams, a junior, is playing his best ball. After a good Iron Bowl, he achieved nine tackles (game-high), one interception, and one breakup. Henry To’oto’o and Josh Jobe both had seven tackles. Battle had six total stops.

Georgia converted only five of 16 attempts on third and fourth down.

Alabama held the Bulldogs to seven points in the second half.

Alabama did not have a dynamic kickoff or punt return, but special teams did no damage to the Crimson Tide.

Will Reichard made both his field-goal attempts, 33 and 41 yards, and had two of his kickoffs returned.

James Burnip had his best performance in terms of punting average. The native Australian averaged 43.8 yards per boot on five punts.

His furthest attempt traveled 50 yards, and he dropped one punt inside Georgia’s 20-yard line.

Despite the Bulldogs having the better punter (Jake Camarda), Burnip gave Georgia rough field position all game. Stetson Bennett and the offense started at its 23-yard line on average. Georgia scored one touchdown following a Burnip punt, and it came in the third quarter.

Nick Saban had his coaching staff prepared to beat Kirby Smart and Georgia.

Bill O’Brien called a tremendous first half. He got the Bulldogs on its heels by mixing up the passing game.

O’Brien took deep shots with Young, but he also executed quick plays to the outside.

He also took advantage of Young’s legs as he rushed for 40 yards with a touchdown on three carries. O’Brien’s play-calling allowed several receivers to get involved. He reverted to questionable moves in the second half; however, the Tide put the game away with a 62-yard drive (12 plays) in the fourth quarter that took 5:09 off the clock. Pete Golding broke Coach Smart at the end with his defense.

Georgia did not take a timeout as it could not create any momentum. Golding timed his blitz packages correctly, and Alabama’s secondary communicated effectively. The Tide pitched a defensive shutout in the third quarter on Georgia.

All position coaches excelled in Atlanta and had their A-game on display.