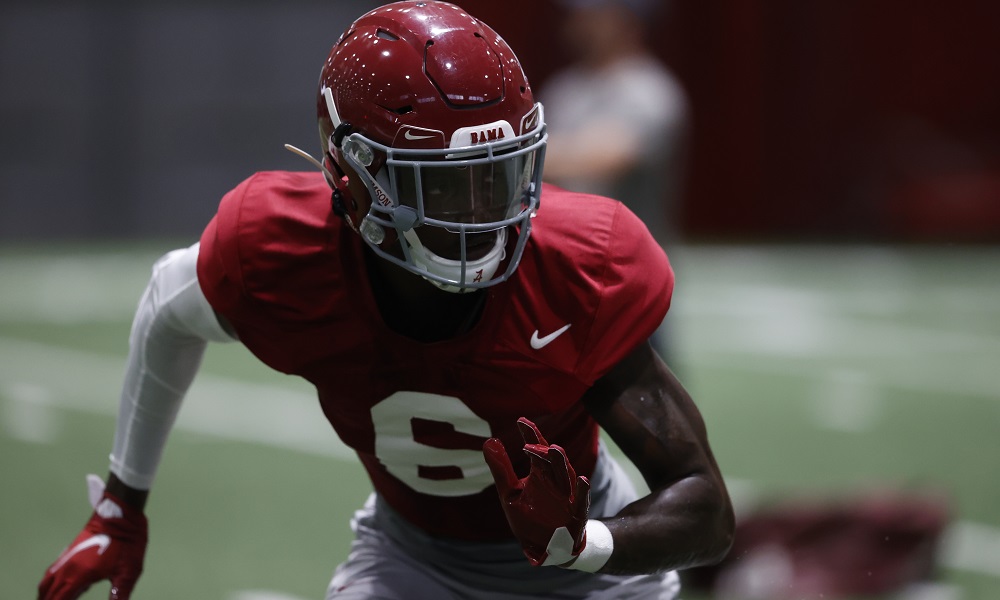 Athletes in football choose the University of Alabama for three reasons: to make a name for themselves, win national championships, and create a path to the National Football League.

Khyree Jackson is in the first phase of his journey.

Alabama sustained injuries to its starting cornerbacks, Josh Jobe and Jalyn Armour-Davis. Nick Saban lists Jobe (foot) as ‘very doubtful’ for the College Football Playoff Semifinal matchup. He is unsure about Armour-Davis (hip) status for the contest versus Cincinnati. Kool-Aid McKinstry, a true freshman, will replace Jobe at one of two corner spots. Armour-Davis could be on the field for New Year’s Eve, but the Crimson Tide has prepared Jackson for the moment at AT&T Stadium in Arlington, Texas.

The COVID-19 virus canceled his 2020 season at East Mississippi Community College; however, he did play at Fort Scott (Kansas) Community College in 2019. Jackson totaled 25 tackles and three interceptions. He came to the Tide in the 2021 signing class as a four-star and has played ten games this season. The 6-foot-3, 197-pounder has the elite size to be a lockdown defender, and his teammates are excited to see him play. Jameson Williams (wide receiver) and Christian Harris (linebacker) are confident in Jackson’s abilities. Williams told local reporters, ‘When you guys get to see Khyree, you guys are going to like him.’

Jackson and Williams arrived on campus in the summer and have battled each other in practice for the Tide.

DaLawn Parrish, head coach of Wise High School, spoke to yours truly of Touchdown Alabama Magazine on Tuesday about Jackson.

The defensive back at Alabama helped Parrish win back-to-back Maryland 4A State Championships in 2015-16 and 2016-17 as a talented wide receiver.

On offense, no one could stop Jackson.

“He was an outstanding player,” Parrish said.

“He would go get the ball at its highest point. Khyree was explosive, and we were unstoppable with him at receiver. He shined bright on the biggest stage. The teams we played against could not put their second-best defender on him. He was too good for that. Khyree treated people like kids out there. Our defensive backs coach would get upset because he wanted Khyree on defense. He would tell me, ‘Let’s play him at DB.’ I said, ‘for what?’ He was so good offensively that it did not matter.”

Jackson caught 12 touchdowns in the 2015-16 season. He dominated 7-on-7’s in the summer before his senior year, but Jackson broke his collarbone. Jackson rehabbed and got stronger while watching his team secure another state championship. Some looked at him as an overnight success, but Parrish knew how dominant he was as a player.

“He was thin in high school. Jackson was about 175-180 pounds, and it was hard for him to lift weights in his rehab. When he decided to go JUCO, he switched from receiver to defensive back. Khyree thought playing DB would give him a better chance at the next level. I thought he was crazy because he was such an elite receiver, but look where he ended up? I am so happy to get to see him shine at Alabama.”

“He knows where you are trying to go as a receiver,” Parrish said. “He reads routes, he knows the splits, and he has hand-eye coordination. He has always been physical, but people believe defensive backs don’t have good hands. Khyree has elite hands from playing receiver. When he grabs the football, he knows what to do.”

He tweeted Dec. 31 will be a moment worth the wait.

Jackson is ready to show his skills on a grand stage in college football.