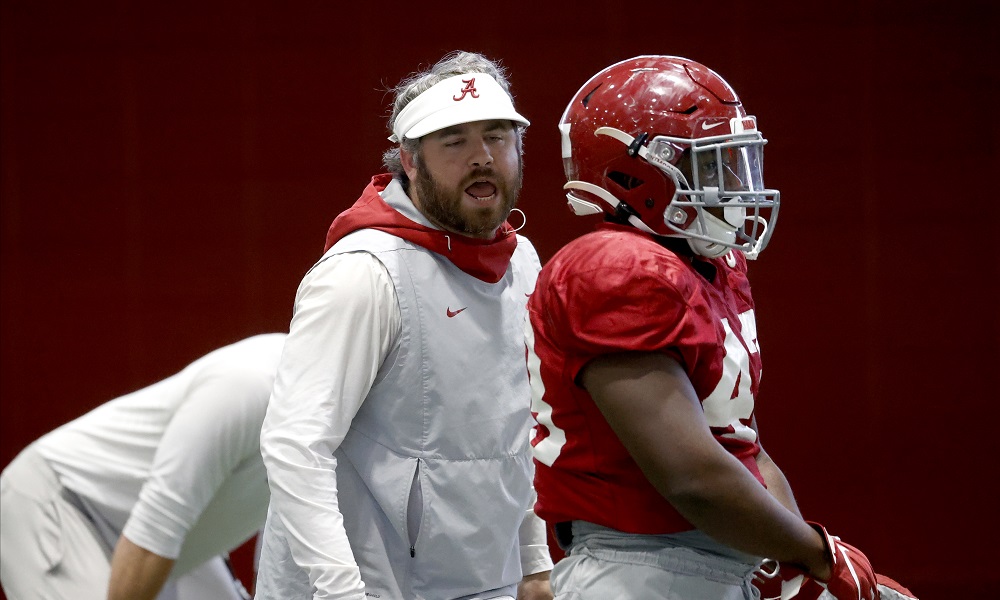 Since Nick Saban has arrived at Alabama, the program has become a factory for creating first-round NFL draft picks. Not only do Saban’s players go on to bigger and better things, but members of his coaching staff do as well.

When joining Saban’s staff with the Crimson Tide the question is no longer if you’ll become a head coach but when. Alabama defensive coordinator Pete Golding, who is in his fourth season on Saban staff, was asked about potential head coaching prospects during the team’s media availability on Monday.

“Obviously, I took this job to work for the best football coach to ever coach the game, in my opinion,” Golding said. “I learn something new every day. I’ve always been one, regardless of where I was at, to be where my feet are, to do the best job where I’m at, to try to prepare our kids the best way, to develop them on and off the field. I think if you do a really good job where you’re at, which obviously a lot of people before e have, then opportunities will come. I promise you I’m in no rush to become a head coach.

“I think a lot of that is overrated. I got in this profession to develop players, to be in that room, to have fun with them, and I think sometimes, depending upon where you’re at, you don’t get that anymore. So I make plenty enough money, more money I would coaching football I can assure you that. So I’m in no rush.

“Obviously, when those opportunities come, you weigh them as a family and see if it’s best for you and for them. But I enjoy where I’m at. I learn something new every day. We’ve got great kids to work with. The University of Alabama is an awesome (place) to be. Our support system, our administration. I love where I’m at.”

In three seasons as the Crimson Tide’s defensive coordinator, Golding has seen steady improvement on his unit in each following year. After dealing with multiple injuries during his first year calling plays in an up and down 2019 season, Golding produced the top scoring defense in the SEC in 2020 as Alabama went on to win the national championship.

In 2021, the defense has once again played at a strong level allowing just 20.2 points per game which ranks 20th nationally. But the unit hasn’t been without its struggles especially during the middle of the season against Florida and especially on the road against Texas A&M which was a turning point game for Alabama.

After following a number of storied defensive play-callers at Alabama, Golding has been under a microscope since the minute he took the job. Being one of the longer-tenured members of Saban’s current staff, it’s safe to say he is the most often criticized coach on the sidelines, fairly or unfairly.

Much like his simple way of viewing his current position at Alabama, Golding has a similar laid-back view on dealing with his critics.

“Their name ain’t on my paycheck, so I really don’t listen to them,” Golding said. “But nah. Obviously, my old man was a high school coach growing up, so I think it was something I learned at an early age from my mom. ‘Look, some people are gonna love your dad, some people are gonna hate your dad. He’s still your dad, you’re always gonna love your dad.’But I don’t listen to the outside noise, to be honest with you. I think if you’re a football coach and you do that, I think you get out of this profession pretty quick. You go start selling insurance and playing golf.

“Obviously, there’s no bigger critic on me than me. Obviously, coach Saban does a great job and stays on top of us to make sure we’re doing things correctly, but also, obviously, I wanna put a great product on the field and that comes with great preparation throughout the week, demanding that from your guys, making sure you’re getting it in practice, obviously, schematically, being sound and trying to get guys in the right place. But more importantly, throughout the week, demanding it, and then I think it shows up.

“I don’t get caught up in it, to be honest with you. I ain’t no big media guy or all that type of stuff. I try to work my butt off and put our kids in the best position that we can for success and try to coach them throughout the week.”