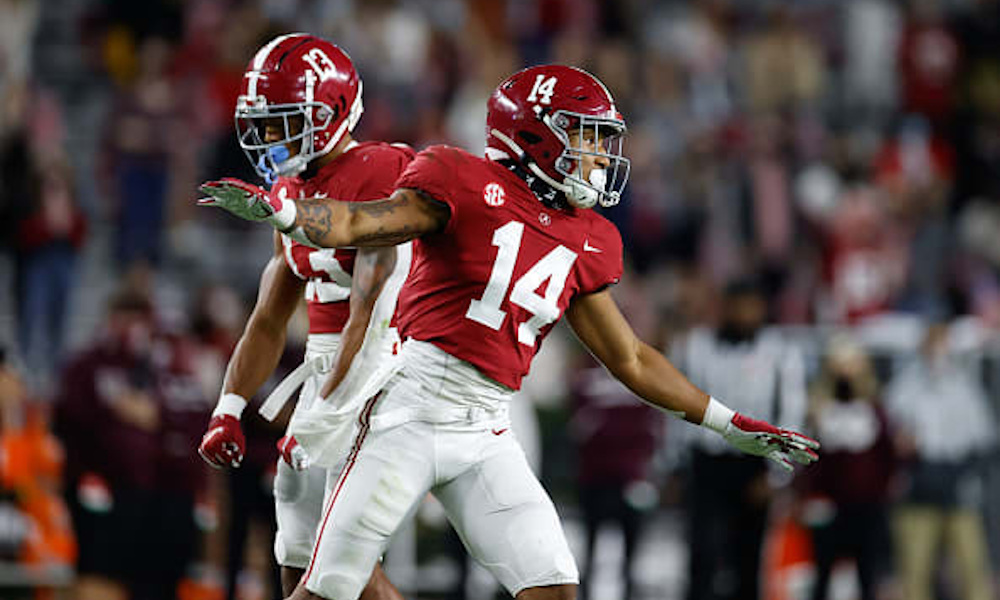 Alabama fans have been pleased with Brian Branch’s production in the defensive secondary, but they also have expressed concerns about Malachi Moore.

Moore, a native of Trussville, Ala., performed well in 2020 as a freshman in nickel.

He earned Freshman All-SEC, second-team All-SEC, and Freshman All-American honors. Moore started 11 of 13 games before an injury sidelined him for the College Football Playoff. He totaled 44 tackles, four tackles for loss, and one fumble recovery.

RELATED: Alabama CB Khyree Jackson is a ‘natural baller,’ per his teammates heading into rematch with Georgia

Moore recorded six pass breakups, three interceptions and returned a fumble for a score. He served as an impact player for Alabama’s undefeated national championship team, but Branch did as well. Branch was Moore’s backup at nickel; however, he collected 27 tackles, seven breakups, and two interceptions. He was listed as Moore’s backup in nickel to open the 2021 season, but a back issue for Moore allowed Branch to have more opportunities. Moore has played in all 14 games but mostly on special teams. He is healthy, but Branch has elevated the Crimson Tide’s defense with his performance. He’s totaled 15 tackles, 1.5 tackles for loss, 0.5 sacks, and four pass breakups versus Auburn, Georgia, and Cincinnati. Branch was everywhere against the Bearcats, totaling eight tackles and two breakups in the Cotton Bowl. As a native of Tyrone, Ga., it is difficult to keep Branch off the field.

Pete Golding explained the dynamics of Moore and Branch to reporters during Wednesday’s presser.

“We are going to put the best 11 guys on the field,” Golding said. “They are working every day. Both have started games here and played a lot of football. Both have been productive, and they understand the defense. Having either one of those guys in there puts us in good shape. They play safety, star, and Branch plays cornerback. We’ve had to move them around because of injuries.”

“We look at both as starters,” he said.

Alabama bases a decision on Moore or Branch starting at nickel in what an opposing offense presents.

If a team is more physical, Branch gets the starting nod. If an opponent has a more traditional look, Moore is the guy. Alabama needed a thumper against Auburn, Georgia, and Cincinnati. Branch stepped up in all three matchups and performed well.

Phidarian Mathis, a fifth-year senior, loves the ‘thump’ Branch has.

“I have always loved Brian Branch’s game,” Mathis said. “He’s a hard worker. Branch shows up every day. And he’s ready to work. I love the way how he comes downhill. He brings that thump with him. I always loved his game. I always gave him his flower whenever it’s due.”

Mathis, a defensive end, gets energized when he sees Branch making plays.

Henry To’oto’o, a linebacker, praised Branch for his communication skills.

We will see who gets the nod in the College Football Playoff National Championship Game, but it is good to note that Alabama has two players it trusts in the nickel spot.