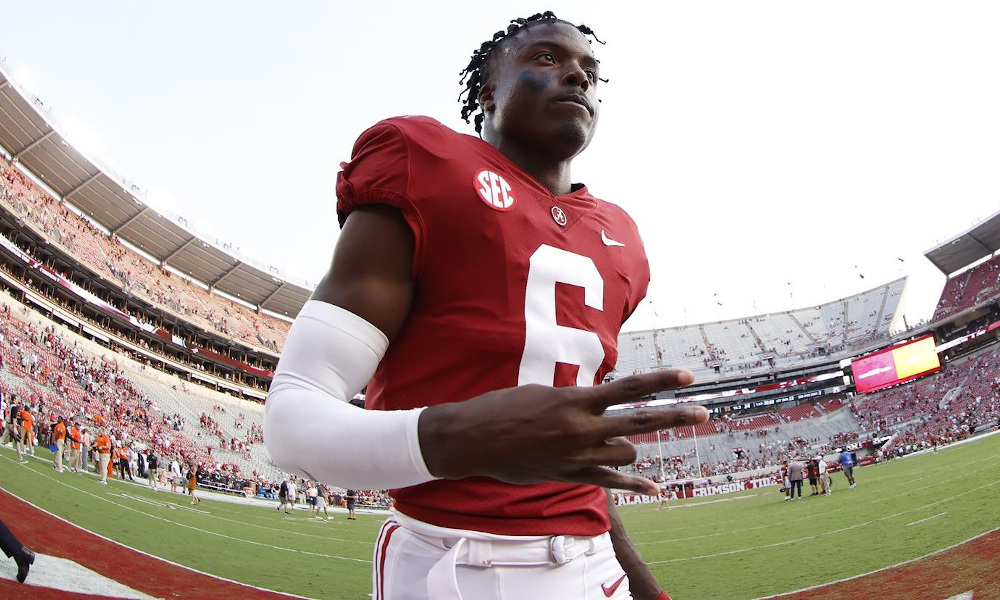 “When you guys see Khyree, you are going to like him,” Williams said.

Jackson, a junior college transfer from East Mississippi Community College, posted via Twitter that Dec. 31, 2021, would be a moment worth the wait. As a Maryland native, he earned an opportunity to play in the Goodyear Cotton Bowl versus Cincinnati.

Nick Saban replaced Jalyn Armour-Davis with Jackson, and the 2021 signee performed well against the Bearcats.

The 6-foot-3, 197-pounder had three tackles and one pass breakup. Alabama’s defensive front suffocated Desmond Ridder and prevented him from attacking its secondary, but Jackson maintained perfect coverage on Cincinnati’s receivers. During an interview with his former high school coach, DaLawn Parrish, Jackson was an elite receiver at Wise High School.

“He was an outstanding player,” Parrish said of Jackson.

RELATED: How does Alabama contain Brock Bowers in rematch with Georgia?

“He could go get the ball at its highest point, and he was explosive. We were unstoppable with him at wide receiver, and he shined brightly on the biggest stage. Khyree has always been physical and very dominant. He knows where a receiver is trying to go. He reads routes and splits. Khyree has elite hand-eye coordination, so he knows what to do when he gets the ball.”

Jackson’s size, speed, and athleticism could be crucial in Alabama’s rematch with Georgia for the College Football Playoff National Championship Game. Pete Golding, the defensive coordinator for the Crimson Tide, said Jackson understands the defensive concepts.

“Khyree understands the coverages, terminologies, and the communication piece,” Golding said Wednesday to reporters. “I think anytime you are a new player in a new system … you are calm when things are stationary. When things start to move around, how fast can you process it? That is a struggle for anybody, especially a new player or starter. I thought he [Jackson] did well. He has the length that you need at corner. He can play the ball in the deep part of the field.”

Golding said Jackson has the competitive fire and toughness at the position.

Henry To’oto’o, a linebacker, came to Alabama in the summer with Jackson. To’oto’o arrived as a transfer from the University of Tennessee. He had to learn the Crimson Tide’s defense, but the California native has played his best brand of football as of late.

To’oto’o said Jackson is important on defense for Alabama.

“Khyree has been working hard,” To’oto’o said. “He deserves it. He stepped up big time for us. He does a tremendous job at the corner position. He’s going to come in day in, day out, and work, try to learn everything he can. And he’s talented. To be able to have him out there, do what he does, he’s a natural baller.”

In his latest social media post, Jackson wants to prove the SEC Championship victory over Georgia was not a fluke for Alabama.

You gotta do it more then once, Show emm it wasn’t luck pic.twitter.com/criAR7WWGf

He gets the chance next week at Lucas Oil Stadium in Indianapolis.