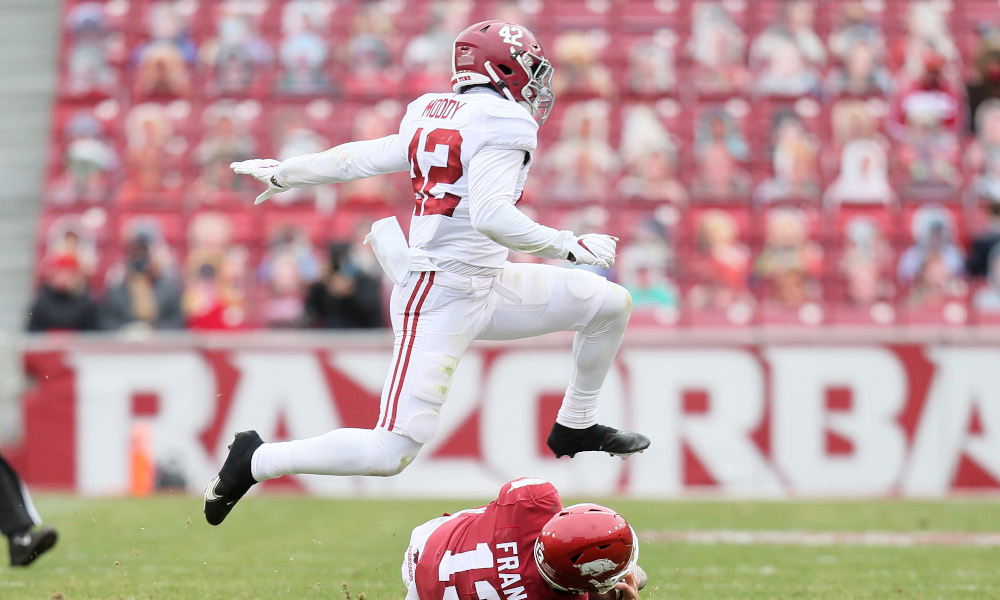 We will be highlighting early spring positions battles and which players will earn starting roles. After a breakdown of the defensive ends, we continue with the defense. We dissect the inside linebacker position for spring ball.

Henry To’oto’o returns as the leader of Alabama’s defense as a middle linebacker.

He could have pursued the NFL Draft, but he decided to come back to school. To’oto’o had to adjust to the Crimson Tide’s defensive system, but he played his best late in the 2021 season. He finished with a team-high 113 tackles, 8.5 stops for loss, four sacks, two quarterback hurries, two pass breakups, and one forced fumble. As a former standout at the University of Tennessee, To’oto’o has a year under his belt at Alabama. He will be a dynamic playmaker and communicator for the Tide in the coming fall.

To’oto’o needs to become more comfortable with taking on blocks and attacking the ball.

Others to watch at middle LB

Jaylen Moody entered his name into the NCAA transfer portal, but he decided to withdraw and return to Alabama.

The 6-foot-2, 225-pounder can play middle and weakside linebacker. He posted 11 tackles and one interception in 2021, but Moody has a wealth of game experience under Saban since 2018. His style fits better in the middle, but Moody will open spring practice as the starter at weakside linebacker. He recorded his first interception in the Crimson Tide’s season opener versus Miami at Mercedes-Benz Stadium. Moody’s play on the ball shows his coverage skills and lateral quickness at the position.

Moody dominated spring ball last year, but he did not get a starting role. He has to fend off talented players this time.

Others to watch at weakside LB

The five-star won the Butkus Award for 2021 in becoming the best high school linebacker. He recorded 113 tackles, 20 stops for loss, six sacks, and two interceptions in his senior year. Butkus compared Murphy to Nakobe Dean who dominated for the Georgia Bulldogs and is pursuing the NFL Draft. Alabama could have in Murphy what it missed on in Dean in the 2019 class.

The 6-foot-2, 215-pounder is a playmaker that enrolled early. Crimson Tide fans will take notice of him.