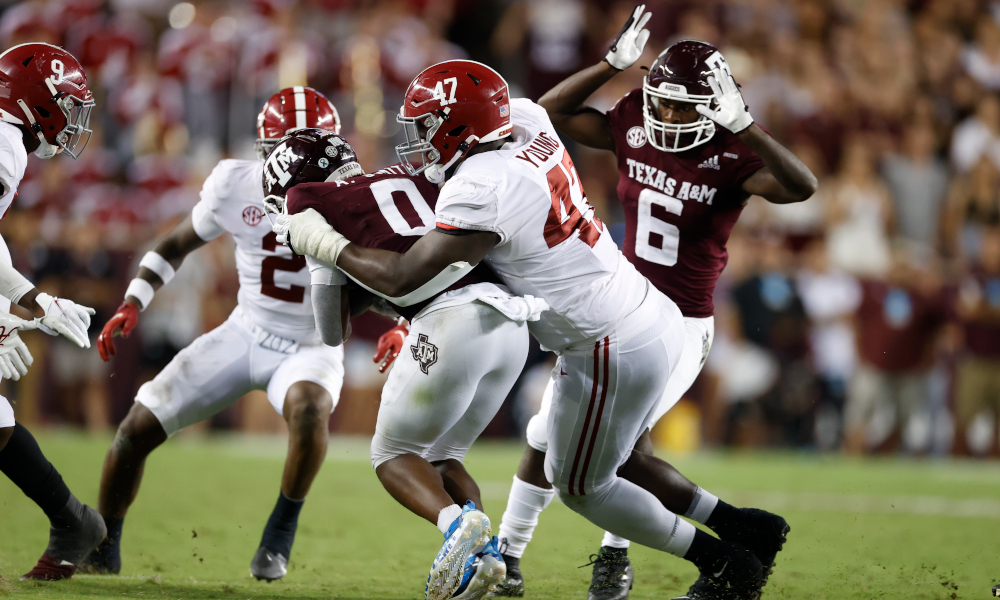 We will be highlighting early spring positions battles and which players will earn starting roles. After a breakdown of the defensive tackles, we continue with the front line. We dissect the defensive end position for spring ball.

Byron Young decided to forgo the NFL Draft and return to school for his senior season.

He will start as a defensive end for the Crimson Tide. As a native of Laurel, Miss., Young arrived at the University of Alabama as a talented four-star in the 2019 signing class. The 6-foot-3, 292-pounder has improved his numbers each year, totaling a career-high for tackles (39), stops for loss (nine), and sacks (two) in 2021. He also recorded two quarterback hurries for the Tide.

Young has collected 91 tackles (17 for loss), four sacks, three quarterback hurries, one fumble recovery, and one pass breakup in 41 games across three years. He’s been effective as a contributor, but now Young gets his chance to shine in a starting role.

Coach Saban has mentioned that Young is one of the quickest linemen on the team.

Justin Eboigbe will serve as the other starting defensive end — opposite Byron Young.

He came as a four-star from Georgia in the 2019 recruiting class. Eboigbe totaled 19 tackles in 2021, but he has 48 tackles, four stops for loss, six quarterback hurries, two breakups, and one interception in 38 games. The 6-foot-5, 285-pounder is good against the run and does have some pass rush moves. He is not as dynamic as Young, but Eboigbe will get an opportunity to secure the starting role. He will have several players pushing him in spring practice to try and supplant him in his senior year.

Contributors that can be starters

Young names to watch in spring