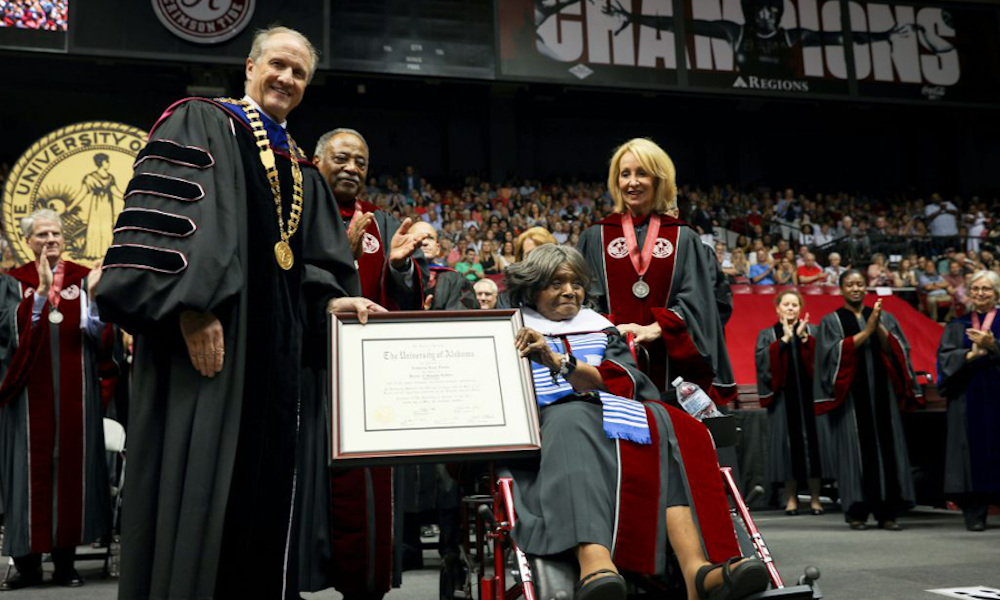 February gets observed as Black History Month, but history keeps us grounded in how much we have grown as people.

The University of Alabama lost an incredible pioneer on Tuesday morning. Autherine Lucy Foster changed the game for black students and athletes for the school, and it honored her on social media.

“The UA community is deeply saddened by the passing of our friend, Dr. Autherine Lucy Foster,” said UA President Dr. Stuart R. Bell. “While we mourn the loss of a legend who embodied love, integrity and a spirit of determination,

She and her friend, Pollie Myers-Hudson, a Civil Rights activist for the NAACP, applied to the institution in 1952. Women could attend UA, but Lucy’s and Hudson’s rights got rescinded due to race.

Lucy fought the situation in court with the NAACP for almost three years, and she won the case on June 29, 1955. She earned her bachelor’s degree in English from Miles College in 1952 and worked as a school teacher and secretary at an insurance company during her push for admission to UA. She enrolled as a graduate student on Feb. 3, 1956, majoring in library science.

Lucy became the first African American ever admitted to a white public school or university in Alabama. She endured segregation of dining halls and dormitories, riots, and life-threatening situations. Lucy got expelled from the school for her safety, and it sparked Thurgood Marshall, the first black Supreme Court Justice in 1967, into action. The 1954 result from Brown v. Board of Education was segregation in public school is unconstitutional or illegal. Lucy’s determination and the help of the NAACP got her expulsion annulled in April 1988. She enrolled in elementary education in 1989 and earned a master’s degree in May 1992.

Lucy’s perseverance earned her a portrait in the student union, an endowed fellowship named in her honor from UA, and the Autherine Lucy Clock Tower on Nov. 3, 2010.

The tower is behind Foster Auditorium, where the Alabama women’s basketball team plays. Lucy was presented with her honorary doctorate in May 2019 at the spring commencement. She has a growing legacy as UA has a $25,000 scholarship named after her. On Feb. 11, students pushed the faculty and public to rename Bibb Graves Hall to Lucy-Graves Hall. The impact she had on campus ushered people to name the building Autherine Lucy Hall. Lucy walked for people like me and black athletes to run.

She opened the door for African Americans to attend, have success, and display their greatness at one of the most prestigious schools in the world. She provided the key for Wilbur Jackson, John Mitchell, Sylvester Croom, Woodrow Lowe, EJ Junior, Tony Nathan, Walter Lewis, and much more. Lucy’s fight allowed Mark Ingram to become the football program’s first Heisman winner.

Dr. Autherine Lucy Foster passed away at 92, but her life of courage lives on through those who dare to challenge the odds.