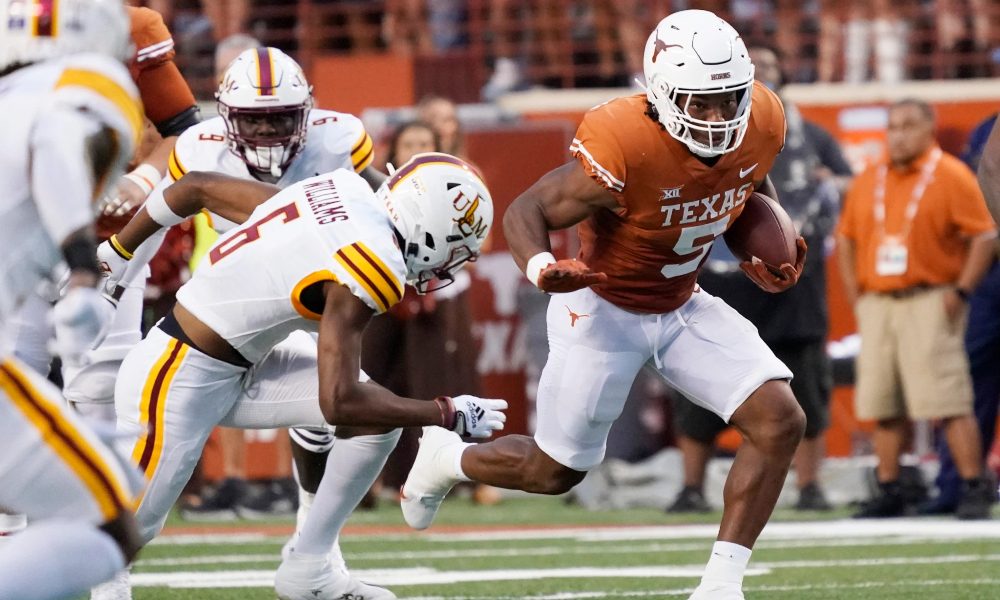 As Alabama prepares for its matchup with Texas, Nick Saban is conscious of all the challenges a Steve Sarkisian offense can present to a defense, but running back Bijan Robinson is someone who will demand a ton of attention no matter where he is on the field.

Robinson is one of the top running backs in the country and a Heisman Trophy hopeful as he begins his junior season with the Longhorns.

What makes his game so dangerous has been his versatility in the backfield which Saban highlighted during his Monday press conference, raving about the talented back.

“He can do everything,” Saban said to local reporters. “He’s got speed, he’s got power, he’s a very instinctive runner. Sets up his blockers well. Has a burst. Has got great hands. Good receiver. They use him a lot in the passing game. This guy is as good of an all-around back as there probably is in the country. Or he’s certainly one of the best of all the guys in the country.”

Robinson has become a household name following an impressive 2021 campaign rushing for 1,127 yards and 11 touchdowns as a sophomore while catching 25 passes for 295 yards and four touchdowns.

He continued to show his versatility during the Longhorns’ Week 1 game against Louisianna Monroe last week where he ran for 71 yards and a touchdown on just 10 carries while catching three passes for 40 yards.

Sarkisian has a history of creating explosive plays as he demonstrated during his time as the Crimson Tide’s offensive coordinator which only creates a greater deal of respect for Robinson’s game.

“He’s very explosive, he can run. He can run on the outside, inside, very versatile running back,” linebacker Will Anderson said about Robinson on Monday. “Like I said it’s gonna be a great challenge for us, but we’re gonna prepare the right way to go play this game on Saturday.”