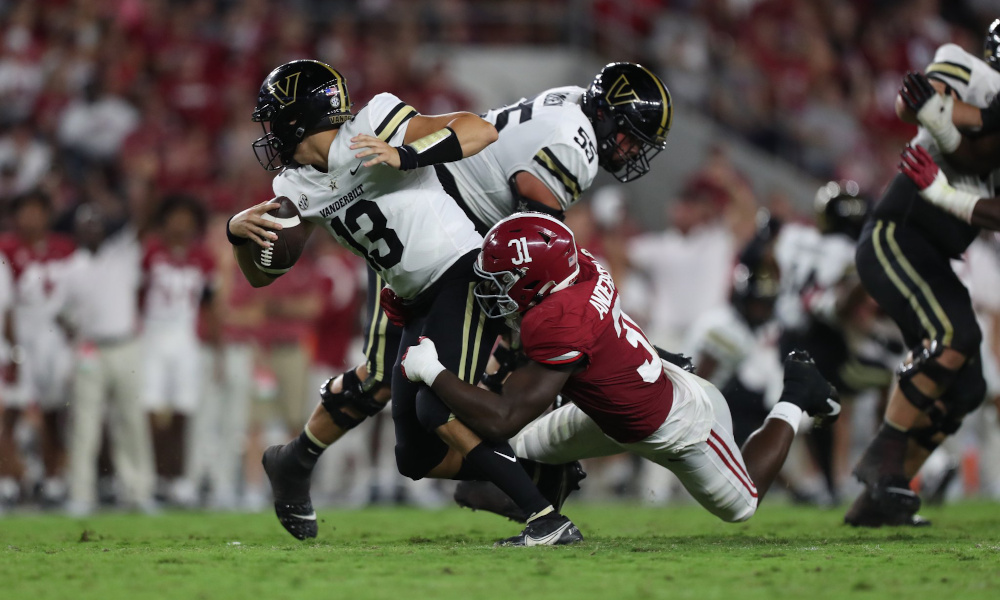 Was a frustrating performance against Texas needed to get Will Anderson going?

It looks that way, especially how he’s attacked quarterbacks in the last two weeks.

Anderson posted 3.5 of his team-high 4.5 sacks against Louisiana-Monroe and Vanderbilt. He amassed 10 total tackles, 4.5 tackles for loss, 3.5 sacks, and an interception return for a touchdown in two weeks. Anderson led the charge in Alabama suffocating Vanderbilt’s offense with five tackles, three tackles for loss, and two sacks in a 55-3 victory for the Crimson Tide.

The 6-foot-4, 243-pounder had one-on-one situations with the Commodores’ offensive tackle, and it did not bode well for freshman quarterback AJ Swann. Anderson wrapped up the dual-threat signal-caller a few times. He now stands behind only Derrick Thomas (52) in school history for career sacks with 29. Anderson probably won’t catch Thomas, but he’s been the closest thing to the larger-than-life pass rusher. He has a goal to win the Heisman Memorial Trophy, and the last two games may be warming him up for a run to New York City. Anderson should have been at the 2021 presentation, but he was a finalist.

He wants Bill O’Brien to have an offensive package for him, but we will see if it happens.

Coach Nick Saban continues to be impressed by the person and player Anderson is.

“Will is a good player, you should be talking about him every week,” Saban said after the Vanderbilt game.

“He makes a lot of plays, makes sacks, plays hard, prepares well, great leader on the team, and I’ll talk about him for as long as you want to talk about him. He played that way last year, he plays that way this year, it is important to him, he has passion for the game, and he understands the game. He’s got power, speed, initial quickness, and turns speed to power in pass rush. A lot of people try to chip him so we move him around so it’s harder for them to do that. Pete [Golding] has done a good job of designing things that are allowing our guys to get pressure up front.”

Alabama takes the road next Saturday to face Arkansas. If Anderson can take his style through the Southeastern Conference gauntlet and pick up sacks, he should be in New York this time for the Heisman presentation.