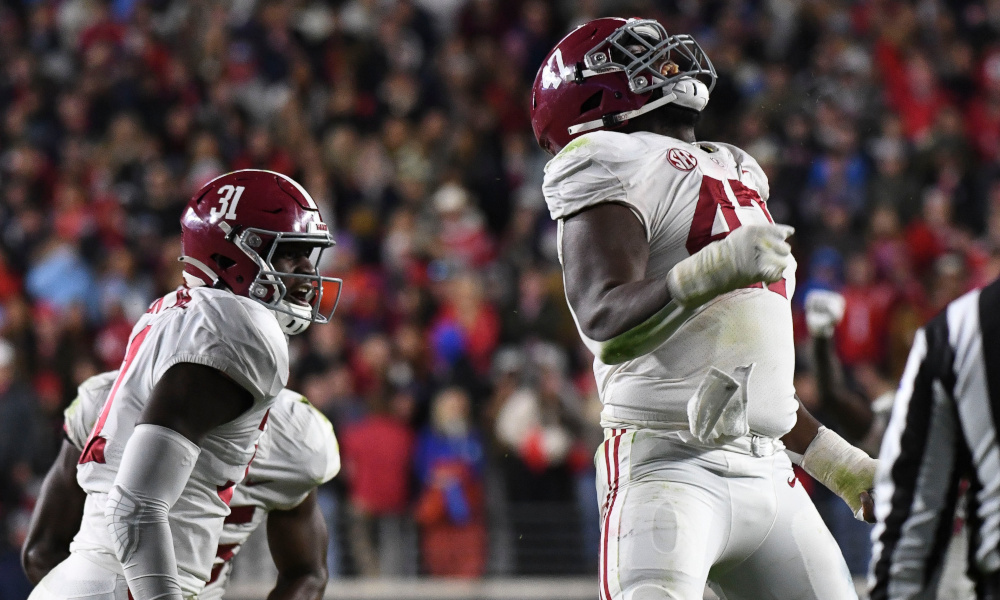 Nick Saban has witnessed his players look uninspired this season; however, signs of relentless Alabama resurfaced in the second half during its 30-24 victory over Ole Miss. The Tide allowed 17 points in the first half, including two rushing touchdowns from Rebels’ freshman running back Quinshon Judkins. Alabama fans were concerned that the loss from Louisiana State University was hanging over the team. Coach Saban, Bryce Young, and Byron Young got the guys together at halftime, and the Tide surrendered one touchdown in the second half. Young, a senior defensive end, had his best game of the year as a native Mississippian. The former four-star in the 2019 class totaled 11 tackles, two sacks, two tackles for loss, a forced fumble, a pass breakup, and a quarterback hurry. Alabama held Ole Miss to 166 yards and one third-down conversion in the second half.

After the game, Saban said the Tide ‘took a step in the right direction’ in becoming the team it wants to be.

Nick Saban with the biggest message after #Alabama earned a 30-24 victory over Ole Miss:

“We took a huge step forward as a football team today.”@TDAlabamaMag pic.twitter.com/e7I6vK8rlP

“This was a great team win,” he said. “I am proud of our players for the way they competed. This is one of the biggest things we wanted our players to get back to. You are responsible for the identity you create, and it is personal in terms of how you play and how you compete in trying to dominate the guy you are playing against. I saw a lot of that in the second half. We had to overcome a lot of adversity. We did not get off to a great start, but the players kept playing one play at a time. They made the plays at the end of the game that we needed to make. Jase McClellan, offensive line stepped up in the second half. The defense got some big stops, and we got the stops we needed to have. It was a tough night in a lot of ways but a great night for us because I am proud of the way our guys competed.”

An ankle injury to Jahmyr Gibbs provided Jase McClellan the opportunity to be productive.

The junior running back from Texas gave the Tide much-needed energy. He ran with a purpose and determination that sparked the offensive line. McClellan led Alabama with 84 rushing yards on 19 carries. Bryce Young tossed three touchdown passes to Jermaine Burton, Ja’Corey Brooks, and Cameron Latu. He has six games with 2+ passing touchdowns on the season.

Alabama is eliminated from the SEC Championship Game with LSU defeating Arkansas, but its focus is on finishing the season strong and preparing for a good bowl game.