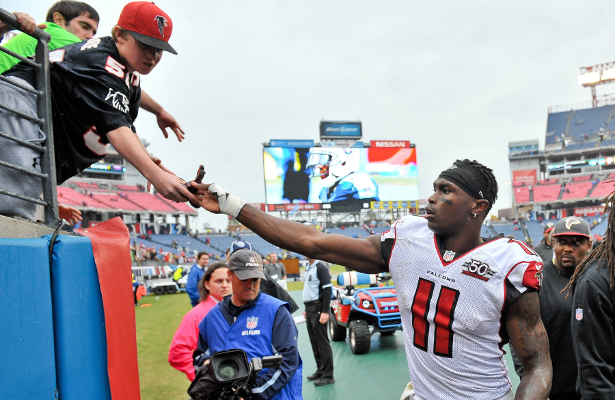 This week starts a new design for our Crimson Fantasy articles. Each player will get their own article each week and we will try to dive in a little deeper into the player’s matchup for the week. The order of the articles will depend on what time the former Tide stars will play on Sundays. Here is the schedule of articles for this week.

In week 8, we start with the star of the season: Julio Jones.

Jones is finally getting over his hamstring injury and is officially off of Atlanta’s injury report. He had his first receiving touchdown since week three and just barely missed out on two more. Jones was heavily targeted by Matt Ryan in the 10-7 win over the Titans.

Devonta Freeman has been the go-to player in this offense and has produced big numbers for fantasy owners. Againt Tennessee, Freeman still got the majority of the touches but did not see the endzone. Atlanta converted just one of their three redzone trips.

With a healthy Julio Jones, the Falcons are still a pass-first offense. Matt Ryan threw 38 passes on Sunday, as opposed to the team’s 31 rushing attempts. Jones was targeted on 45 percent of the passing plays but only finished with 37 percent of the passing yards. Roddy White is starting to see more targets and may be back in the number two spot. Leonard Hankerson was the one to step up behind Jones through the first four weeks but he has fallen to a hamstring injury of his own.

Jones is still the number one fantasy wide receiver in standard scoring leagues and could get back to the state he was in the season’s first three weeks. With Hankerson being questionable and Jones being at 100 percent, Jones should be getting back to 15-plus targets in every week.

This week, the Falcons host a Tampa Bay team that has allowed the fifth most fantasy points to wide receivers this season. At least one receiver has put up double digit points each week against the Buccaneers. So even if you don’t have Jones on your fantasy team, it might be smart to start anybody on the Falcons this week.

Jones will often be lined up against Alterraun Verner who has been struggling with an injury of his own. Expect big things from the Falcons offense this week but it is tough to pick whether the scores will come through the air to Jones or on the ground to Freeman. I expect them both to find the endzone in the same game for the first time since week three.