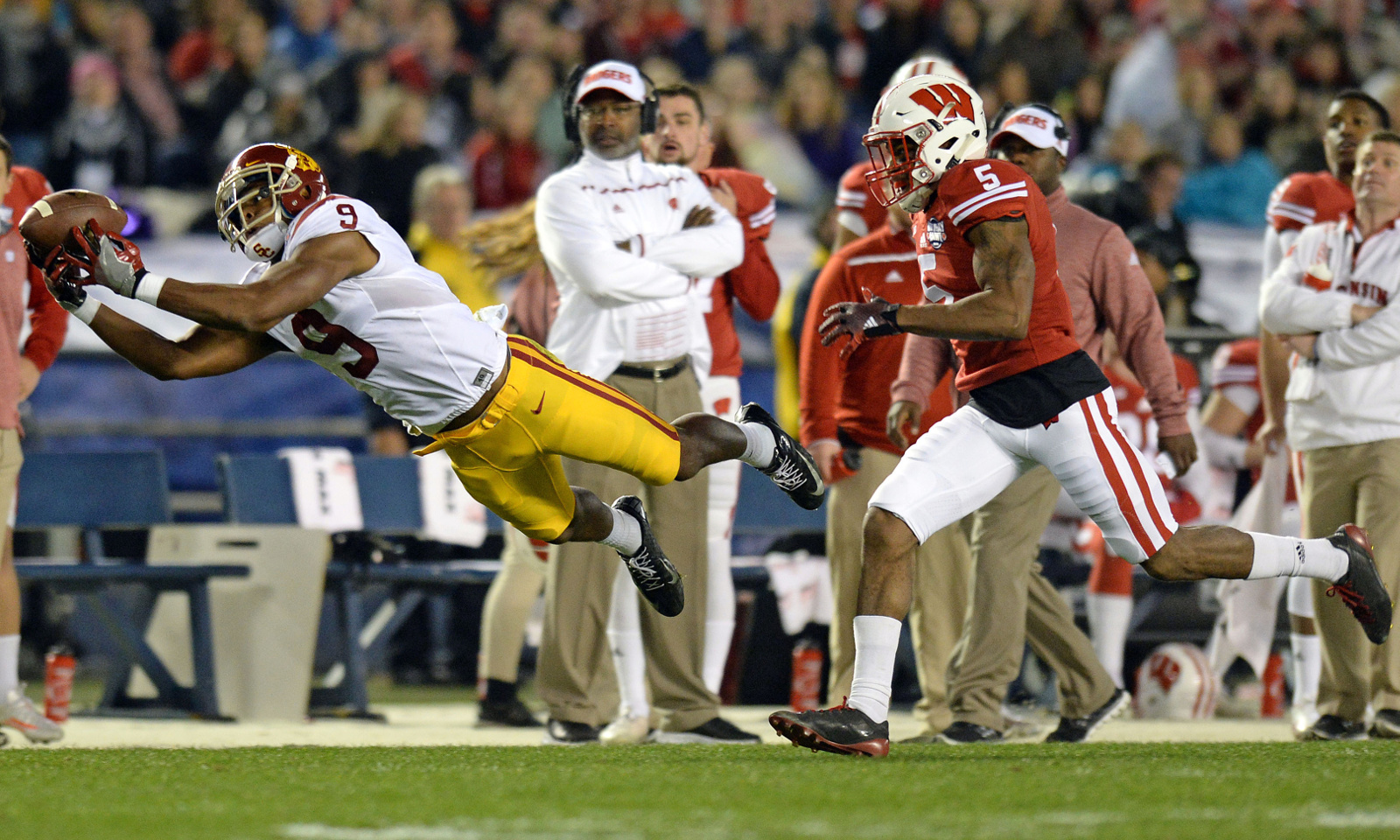 Two of the more story filled programs in college football will square off Saturday at AT&T Stadium to begin the 2016 season. Alabama coach Nick Saban and the Crimson Tide anticipate an opportunity to repeat as national champions, while Southern California looks to pull out a stunning upset.

Both schools have impact players that will be called on to make a difference, but for now, yours truly has placed the Trojans under the microscope first.

Regardless of an 8-6 record, the Trojans fielded a talented roster. Tough losses to Stanford (twice), Notre Dame, Washington and Wisconsin kept it from making the College Football Playoff, nevertheless, Helton and company return with experience on both sides of the ball.

It lost Cody Kessler and three veteran defensive linemen—Anthony Sarao, Delvon Simmons and Greg Townsend—to graduation and the National Football League, but listed below are USC’s impact stars heading into this weekend’s contest against Alabama in the AdvoCare Classic.

He’s obviously done enough to win the team, as Helton named Browne the starter for USC two weeks before its season opener against Alabama. Browne comes in a strong lineage of talented quarterback in the 2000s, stemming back to 2002 Heisman Trophy winner Carson Palmer.

Browne (6-foot-5, 220 pounds) saw action in three games last season, totaling 113 passing yards on eight of 12 completions. He enrolled in 2013 as a five-star prospect, after setting state records in yards (12,953) and completions (882) with 146 touchdowns in his career at Skyline High School.

Offensive coordinator Tee Martin must find ways to get him comfortable early and often against Alabama’s defense, but the Trojans do have pieces around Browne to push him toward success.

With Su’a Cravens in the NFL, Cameron Smith emerges as one of the captains on defense. He was a tackling machine through 10 games as a freshman, averaging nearly eight stops a game.

Smith finished behind Cravens with 78 total tackles in 2015, and added one tackle for loss, a sack, three pass breakups, three interceptions and a defensive touchdown to his stat sheet.

USC’s lack of depth and experience on the defensive line will cause another sophomore linebacker, Porter Gustin, to step up. Gustin recorded 6.5 tackles for loss in 14 games, while tying for the team lead in sacks (5.5) during the 2015 season. The combination of he and Smith must affect the timing of whomever Alabama has at quarterback (Cooper Bateman, Blake Barnett).

Jackson is one of the more versatile athletes in college football. He’s a two-way player at cornerback and wide receiver, while having a dynamic skill set in the return game (two punt return scores, 2015).

The 5-foot-11, 185-pound junior recorded 35 tackles, eight pass breakups, a forced fumble, an interception and a defensive touchdowns through 14 games a year ago. Alabama is deep and talented at the wide receiver position, but Jackson will have help in Iman Marshall and Chris Hawkins. Hawkins and Marshall finished at Nos. 3 and 4 respectively in tackles last season.

Marshall led USC’s secondary with three picks in 2015, while Hawkins came up with two.

Unlike Alabama, the Trojans return both of its main rushers from a season ago. Jones is the big play threat, whereas Justin Davis (senior) performs better in between the tackles. Jones opened a lot of eyes as a freshman, toting the ball 153 times for 987 rushing yards and eight touchdowns.

Not to be outdone, Davis chimed in with 902 yards rushing and seven scores (169 attempts).

He complements wide outs in having solid hands out the backfield. Davis was USC’s fifth leading pass catcher, registering 189 yards on 18 receptions. Jones will more than likely start against the Crimson Tide; however, it will be the duo of him and Davis to settle in Max Browne.

He is USC’s ultimate playmaker. Smith-Schuster is on numerous preseason all-conference, All-American and awards watch lists. The 6-foot-2, 220-pound target is coming off a year, in which he collected 1,454 receiving yards and 10 touchdowns on 89 catches. He’s managed to grab 143 passes for 2,178 yards and 15 touchdowns in two seasons. After making life easier for Cody Kessler in 2014 and 2015, Smith-Schuster is tasked with creating separation against Alabama to help Browne.

Saban may have redshirt sophomore cornerback Marlon Humphrey matched up on Smith-Schuster, and if that’s the case, it will be imperative for Humphrey to locate the football.

College football analyst Phil Steele has the California native as the top-ranked wide receiver prospect, heading into the 2017 NFL Draft. Steven Mitchell (Jr.), Darreus Rogers, De’Quan Hampton and the ever so diverse, Adoree’ Jackson all will serve as help for Smith-Schuster.