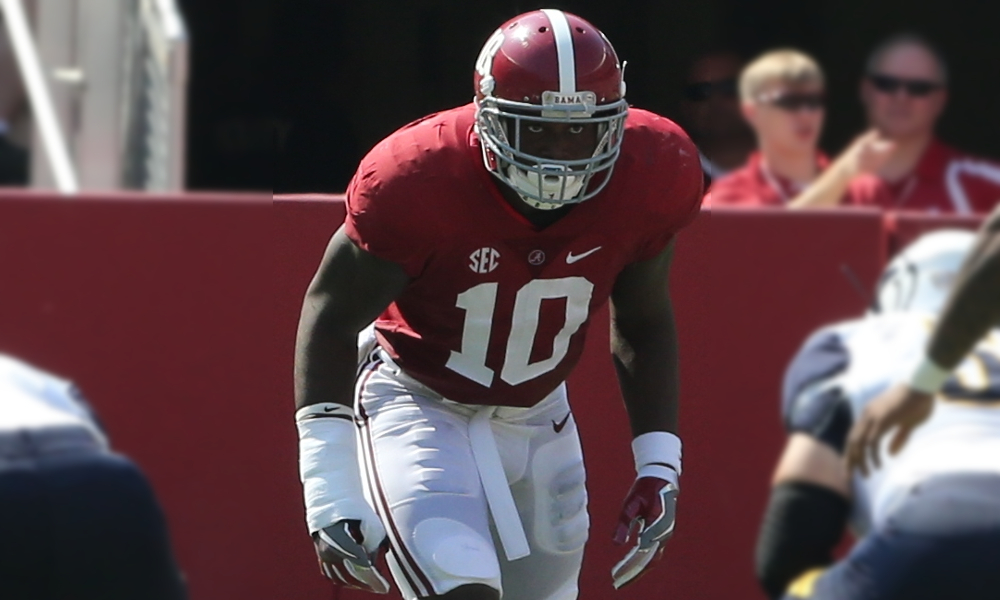 On Thursday night, week one of the NFL’s four-week preseason slate was kicked off. Though Marlon Humphrey sat out with an injury, five of Alabama’s eleven rookies took the field on opening day and to mostly stark reviews. The first week will continue until Sunday night’s clash between the Seattle Seahawks and the Los Angeles Chargers. As neither team holds a Crimson Tide rookie on their roster, it’s time to evaluate the play of the rest of the young guys.

Despite slipping to the end of the first round, expectations for linebacker Reuben Foster are as high as anyone’s. After racking up a trio of interceptions in training camp, those expectations have risen again. Fortunately for Foster, he looked the part in Friday night’s game against the Chiefs.

He appeared as athletic as ever, something that helped him to stand out in Tuscaloosa. He was highly active at both linebacker spots, and played the entire first half. He totaled a pair of tackles on the day in addition to this fantastic near-pick in the endzone that would go down as a deflection:

Should Reuben Foster continue at this rate, he will be a rookie star by the end of the year.

An underrated part of Alabama’s vaunted defensive line in 2016, Dalvin Tomlinson was a second round pick by the New York Giants this year. He may have been underrated at Alabama, but he will not be in New York. The hype began to build around Tomlinson from the moment the pick was in, and his impressive training camp has only ensured that will continue to grow. After his preseason debut, that hype train has not stopped chugging along.

He was one of the best run stoppers on the day for the G-Men, and the second highest-rated defender outside of the former Alabama safety, Landon Collins:

We get the feeling Landon Collins just might be the Giants top graded player on defense often this season pic.twitter.com/nLPPgL8eRo

Tomlinson tied for second-best on the team in tackles with an impressive four stops. His unique run-stuffing abilities give him a huge leg up against the other competition on the roster.

After two seasons at Bowling Green, and one at Alabama, Gehrig Dieter signed with the Kansas City Chiefs as an undrafted free agent. Reports out of training camp are that Dieter and the Chiefs’ first round pick, Patrick Mahomes II, have built an early bond. During Friday night’s game, we found something else about Dieter:

According to the broadcast on the NFL Network, Andy Reid has said that Dieter has earned the nickname of Sheep Dog, but no explanation has yet been given. Mahomes did, however, have fun with it on Twitter, as well as Dieter’s fiancee. As far as his play on the field goes, he did not see as many snaps as he may have liked to. He caught the only pass thrown his way on the night, this impressive 16-yard completion in tight coverage:

With the unexpected release of pro-bowl receiver, Jeremy Maclin, earlier this year, the Chiefs desperately need to find some gems this fall. Gehrig Dieter’s reps should increase as the preseason progresses, and if he can continue to impress while using the bond with Mahomes to his advantage, he has a good chance of making the 53-man roster in September.

Unlike Dieter, ArDarius Stewart was a third round pick in this year’s draft, and with that comes much higher expectations. Stewart’s off-season got off to a rough start after the Jets announced he had suffered a thumb injury during minicamp – an injury that required surgery. They operated on his thumb as well as an aggravating groin injury from the past.

It was surprising to see him take the field at all in the Jets’ first preseason game at all, let alone make a highlight out of extreme physicality. He had just one catch for eight yards in the 7-3 win over the Titans, but he displayed the physicality and strength that made him such a huge part of the Tide’s offense on that one play:

It’s safe to say he is healing up just fine, and the expectations that he can be a number one receiver for one of the worst teams in the league are still a reachable goal. As the preseason progresses, it’d help Jets’ fans to see his highly-touted run-after-catch ability in live NFL action. At least that way they know they have somebody with some talent on the offensive roster.

He didn’t have a pass thrown his way in his debut, but the first-round tight end made it known his versatility could translate to the pros. As shown in this Pro Football Focus graphic, O.J. Howard lined up in three different positions much like he did at Alabama:

One of O.J. Howard's best attributes?

The ability to block as a true in-line tight end pic.twitter.com/qwJsuMVTrx

The Buccaneers’ impressive corps of receivers and tight ends look to give them one of the league’s best offenses behind Jameis Winston’s arm. They did, however, struggle at times with inconsistency on the offensive line last year, something O.J. Howard can help fix. He was one of college football’s best blocking tight ends by the end of his four-year career, and when combined with his speed and athleticism, he is a scary matchup for linebackers and corners.

In his debut, he showed off those blocking skills on more than one short-yard occasions. He helped lead the way to open up holes for the Bucs’ running backs to slip through on a third-and-one and again on a fourth-and-one. Howard is sure to garner more targets as he and Winston continue to build chemistry in the passing game.