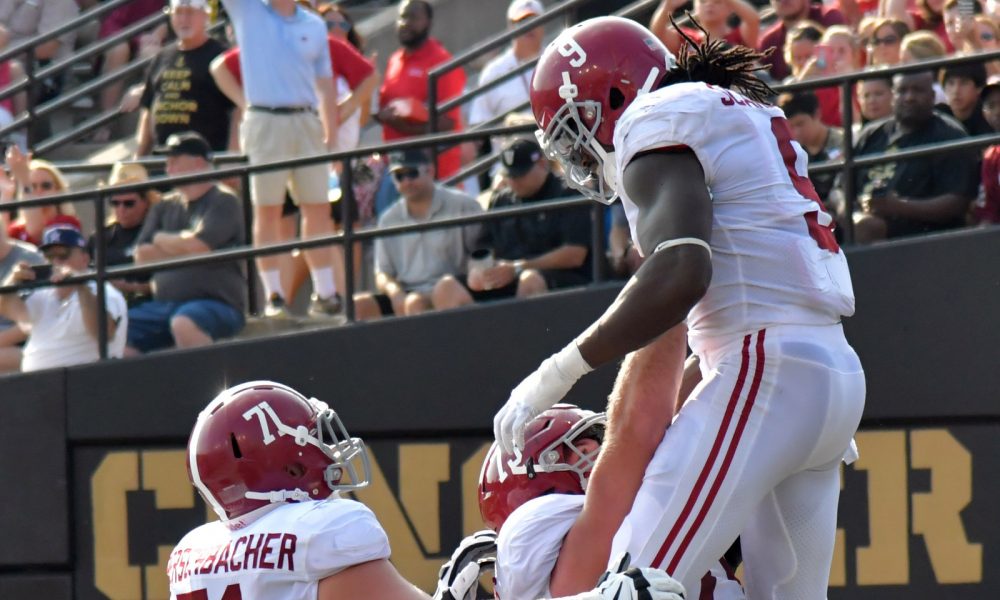 Former Alabama standouts Barrett Jones, Andre Smith, Cam Robinson, Ryan Kelly and Alphonse “Shank” Taylor among others would be proud of the offensive line the Crimson Tide had at Vanderbilt Stadium in Nashville on last week.

After being called out by Commodores’ defensive lineman Nifae Lealao and hearing all week on how Vanderbilt’s defense is much improved, Alabama’s Brent Key had the “big uglies” ready for war and they set the tone from the start.

Behind the leadership of Bradley Bozeman, Ross Pierschbacher and Jonah Williams, the Tide’s offensive line cleared the way for 677 total yards.

Running back Damien Harris turned in a career day, as he followed the front unit to 151 yards rushing and three touchdowns on 12 carries. Harris averaged 12.6 yards per rush – including a 61-yard burst to the end zone in the first quarter. Seven of 12 attempts resulted in first downs.

Sheer dominance up front allowed head coach Nick Saban to play six different backs, which concluded with having the Crimson Tide post 496 rushing yards – most in a game in 31 years.

All six rushers averaged at least five yards per carry, while the combination of true freshmen Najee Harris (70) and Brian Robinson (51) totaled 111 yards and a score on 15 attempts.

Alabama outgained Vanderbilt by 599 yards (677 to 78) and had 38 first downs, both of which were the largest margin and most overall in program history. Jalen Hurts and Tua Tagovailoa could’ve done more in the passing game, but why force something when the run is working.

“You have to say something about the offensive line,” Saban said.

“We talked a lot about how good their defense was. For our offensive line to control the line of scrimmage the way they did, I think the runners ran well and everyone did a good job.”

Just like defense and a fan base, offensive production carries too.

According to junior left guard Ross Pierschbacher, the Crimson Tide took last week as a challenge and he said the group ‘answered the bell.’

“We played good,” Pierschbacher said. “It was a whole offensive effort and they [Vanderbilt] called us out, so we had to perform well. We got a good look in practice this week from all the guys that run scout team and it was the best week of practice thus far for the offensive group.”

Saban and the Tide look to build off this effort with an even stronger contest against Ole Miss, as the team returns to Bryant-Denny Stadium on Saturday for an 8:00 p.m. (CT) kickoff.